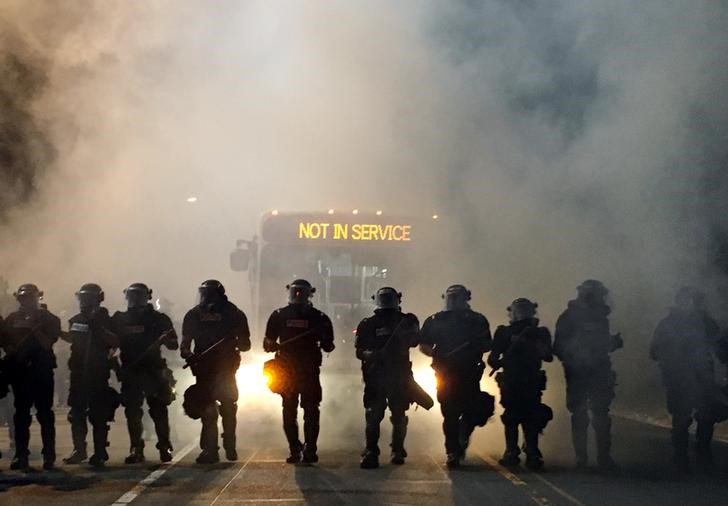 Donald Trump and Hillary Clinton decried a fresh round of police-involved shootings on Wednesday, with the Republican nominee saying he was “very troubled” by the killing of a black man by a white police officer in Oklahoma.

Courting black voters who have long spurned Republicans, Trump’s event in Cleveland Heights’ New Spirit Revival Center took a bizarre turn when he was introduced by boxing promoter Don King, who used a racial slur as he made the case for black voters to support Trump.

Trump’s latest foray into the black community not only sought to connect with voters in Cleveland, home to a large community of African-American voters key to Clinton’s prospects in Ohio, but also with moderate suburban voters, who frequently hear Clinton describe Trump as extreme.

King who is black, introducing Trump, raised eyebrows when he said a black man is always framed by his skin color, recalling that he once said “if you’re poor, you’re a ‘poor Negro.’ If you’re rich, you’re a ‘rich Negro.'” An educated black man is “an intellectual negro.”

Gasps and laughs could be heard from the audience.

The King incident underscored the often clumsy way in which Trump has made his appeal to minority voters. Many black community leaders and voters have been offended by his dire depiction of life in minority communities. Trump’s outreach has also been viewed cynically as an attempt by his campaign to soothe concerns among more moderate, suburban voters.

At the end of the Ohio church event organized by members of his diversity coalition, Trump was asked about recent high-profile police shootings in Oklahoma and North Carolina. Trump said 40-year-old Terence Crutcher, who was killed in Friday’s Tulsa, Oklahoma, shooting, “looked like he did everything you’re supposed to do. And he looked like a really good man.”

But hours later he called for the expanded use of stop-and-frisk, a police tactic that a federal judge has ruled can be discriminatory against minorities. Trump said during a Fox News town hall taping that the tactic that gives police the ability to stop and search anyone they deem suspicious had “worked incredibly well” in New York, where it expanded under former New York City Mayor Michael Bloomberg.

Clinton notably made no direct mention of Trump in a speech in Orlando, Florida, focused on helping people with disabilities thrive in the U.S. economy. She pointed to the Oklahoma and North Carolina shootings at the start of her remarks, saying it added two more names “to a long list of African Americans killed by police officers. It’s unbearable and it needs to become intolerable.”

Clinton has made curbing gun violence and police brutality a central part of her candidacy. She has campaigned alongside a group of black women called the “Mothers of the Movement,” who advocated for more accountability and transparency by law enforcement. The group includes the mothers of Eric Garner, Trayvon Martin and Michael Brown, black victims of high-profile killings.

Trump, joined by running mate Mike Pence at the Ohio event, has routinely praised police officers in his speeches to supporters. But after reading from notes about the role of the black church in the civil rights movement and vowing to help struggling black Americans, Trump questioned the Tulsa officer’s reaction in shooting Crutcher, who was unarmed.

Video of the shooting, which Trump cited, shows Crutcher’s hands up as officers approach and Crutcher then appears to place his hands on a vehicle before the officers surround him. He then drops to the ground. Someone on the police radio says, “I think he may have just been tasered.” Then almost immediately, someone can be heard yelling, “Shots fired!” Crutcher is left lying in the street.

Trump’s meeting came after street demonstrations continued into the early hours of Wednesday in Charlotte, North Carolina. On Tuesday, 43-year-old Keith Lamont Scott was fatally shot by Charlotte police officer Brentley Vinson, who is black. Officers say Scott was armed and posed a threat. Police used tear gas to disperse protesters during the demonstrations that left about a dozen officers injured.

During the question-and-answer session at the church, Trump said he was a “tremendous believer in the police and law enforcement, because we need that for our society.” But he said law enforcement was also troubled by the police-involved shootings, adding, “People that choke, people that do that, maybe they can’t be doing what they’re doing.”

While she steered clear of Trump — with the exception of her campaign mantra, “Love trumps hate” — the topic was an implicit poke at Trump’s much-publicized mocking of a disabled journalist during a rally last year.