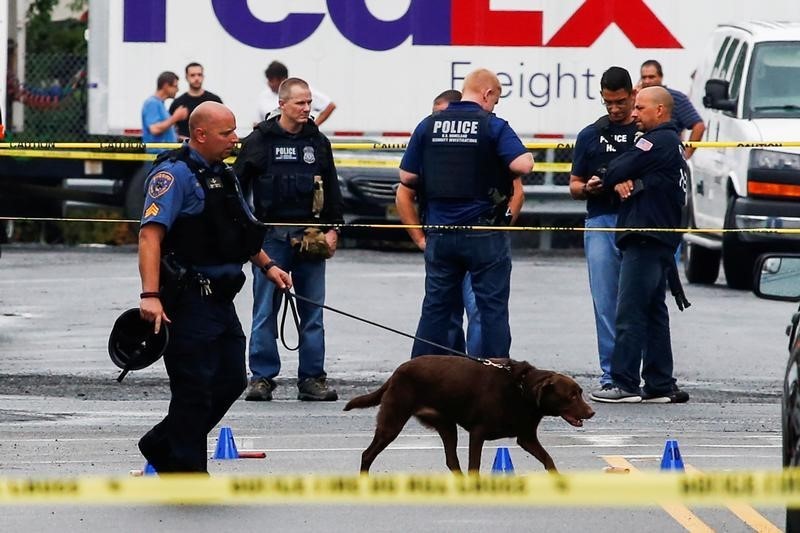 Federal authorities said Tuesday that the man accused of carrying out bombings here and in New Jersey over the weekend hoped to stage a suicide attack and worried he would be captured first.

In a journal found on him after he was captured, Ahmad Rahami, the 28-year-old suspected bomber, had wrote about his hopes for martyrdom and wrote that G-d willing, “the sounds of the bombs will be heard in the streets,” according to an FBI complaint.

For the first time since the bombings, authorities offered the first indications of a possible motive, with the FBI complaint saying that Rahami had praised a former top al-Qaida leader, referenced the Islamic State, touched on extremist ideologies, and decried the United States for its military actions in countries like Afghanistan and Syria.

Rahami, who remained hospitalized after a shootout with police, was charged in two federal courts — in Manhattan and in Newark — with nine counts stemming from the attacks, including using weapons of mass destruction and bombing a public place, and could face up to life in prison.

Investigators have said they are still trying to determine whether Rahami had any outside help. Since Rahami was captured in Linden, NJ, officials have said they found signs of his interest in extremist thoughts, ranging from comments they said he wrote to videos he liked online.

A handwritten journal was found on Rahami after the shootout, according to the complaint filed in Manhattan, and included an initial glimpse at what authorities said was his mindset after the bombings.

During a hearing Wednesday discussing how to prevent future attacks, Rep. Michael McCaul (R-Texas), who chairs the House Committee on Homeland Security, displayed what he said was a copy of the journal found on Rahami, which appears tinged with blood and was apparently pierced by a bullet.

The journal included notes that the FBI was looking for him, discussed shooting police and said he was praying to All-h “to not take JIHAD away.” According to the complaint, the journal was damaged during the exchange of gunfire. This journal also included references to the Boston Marathon bombings, the 2009 Fort Hood shooting in Texas and “Brother Osama Bin Laden.”

When McCaul showed what he said was an image from the journal at the hearing, it included what appeared to be references to the Islamic State, the terrorist group that claimed responsibility for stabbings in a Minnesota mall last weekend but has been silent about the New York bombing.

The writing displayed by McCaul mentions “Brother Adnani,” an apparent reference to Abu Muhammad al-Adnani, who was killed last month, and the word “Dawla,” an Arabic word for “state.” The page McCaul showed included the same language mentioned in the FBI complaint about attacking the kuffar — or non-believers — “in their backyard.”

The FBI said Wednesday afternoon that it was seeking “two unknown individuals” — the two men viewed on surveillance footage encountering the bomb that did not detonate in Manhattan on Saturday night. In this footage, the two men are seen finding a suitcase, removing the explosives from it and then leaving with just the suitcase, officials said.

Police have said that the two men are being viewed as witnesses, not suspects. But in an announcement sent out, the FBI said agents are “interested in speaking to these individuals and recovering the luggage.”

“We have no reason to believe that they’re connected,” James Waters, the New York Police Department’s chief of counterterrosim, said. “I cannot stress enough. They are witnesses at this time. ”

Waters said investigators have pursued more than 100 leads in the case. He said the improvised explosive removed from the suitcase “was a very shock-sensitive device,” adding of the two men who removed it: “They’re very, very lucky.”

Even as investigators continue to seek more surveillance footage as they probe the bombings, the criminal cases related to the attacks have gotten underway.

On Wednesday morning, Attorney General Loretta Lynch said the federal charges against Rahami “reflect the Justice Department’s unwavering determination to find, capture and prosecute all those who attempt to commit or commit acts of terror against our nation.”

Lynch, speaking at a conference in Washington, praised law enforcement for their efforts and also singled out the “crucial role” played by citizens who found un-exploded bombs and alerted authorities.

David Patton, the top federal defender in New York, asked for Rahami to have a first court hearing Wednesday, suggesting that the suspected bomber could participate from his hospital bed.

U.S. Attorney Preet Bharara said Wednesday that the first case to proceed would be the federal case in Manhattan. Prosecutors there, he said, had filed a writ with the U.S. Marshals service and expected Rahami would soon be brought into that district.

Before prosecutors formally filed charges, the FBI had acknowledged Tuesday that more than two years before the recent bombings, agents had investigated Rahami, named as the only suspect in the weekend bombings.

Authorities began looking into him after receiving reports that his father, Mohammad Rahami, said he was a terrorist, though officials said Tuesday that his father later recanted the claim. Agents conducted interviews, checked with other agencies and looked at internal databases, “none of which revealed ties to terrorism,” the bureau said in a statement.

The revelation was the second time this year – and the fourth time since 2013 – that the FBI acknowledged that it had investigated someone who later carried out what officials called an act of terror.

Late Tuesday, Patton, executive director of the Federal Defenders of New York, filed a response to the complaints asking for a hearing Wednesday so that Rahami could be informed of the charges and gain access to legal representation.

Rahami was “held on state charge in New Jersey for over 36 hours without the benefit of counsel,” Patton wrote in the filing. In that time, Patton said federal law enforcement agents have questioned Rahami, who was shot multiple times during his gun battle with police Monday morning.

Patton asked a magistrate judge in New York to schedule a hearing as soon as possible on Wednesday, noting that if Rahami is unable to head into Manhattan due to his injuries, attorneys from his non-profit legal group could head to his hospital room and represent him in a video conference.

The criminal complaints also offered or confirmed additional details about the attacks. Authorities said the pressure-cooker bomb that exploded in the Chelsea neighborhood of Manhattan was left in a dumpster, and that the explosion “propelled the more-than-100-pound dumpster more than 120 feet.”

“Hundreds” of ball bearings and steel pieces were found around the explosion area, while the blast “caused significant injuries and multiple-million dollars of property damage,” the complaint said.

The complaint also said there were 31 people injured in the blast in Chelsea, two more than the number of injuries authorities had reported since the weekend.

An FBI complaint also said that Rahami had purchased numerous items for the explosives — including igniters, circuit boards and citric acid — on eBay and had them shipped to his workplace. Investigators also found that a social media account used by Rahami had videos relating to jihad.

The complaint also said that Rahami had left numerous fingerprints behind on a bomb placed in Chelsea that did not detonate and on materials — including unexploded bombs and handwritten documents — in a backpack left at an Elizabeth, NJ, train station.

Just two days before the explosions took place in Chelsea and along a charity race path in New Jersey, the complaint says, a cellphone video was recorded of Rahami burning “a small, black cylindrical object” in a back yard — in an apparent practice run.

A day after Rahami was captured by police, investigators continued to delve into his life and examined his friends, family, records, social-media accounts and phones.

According to friends and court records, many aspects of Rahami’s life appeared to begin unraveling after he graduated from high school. After graduation, Rahami’s father forced him to make a trip back to Afghanistan, even though he didn’t want to go, said Imani Podhradsky, a classmate.

In 2014, Rahami was accused of stabbing a family member in the leg, court records show. When Rahami’s father spoke briefly to a scrum of reporters Tuesday, he said that the younger man was violent toward other family members “for no reason.”

At some point he married a Pakistani woman. Two years ago, Rahami was in Islamabad, Pakistan, when he contacted the office of Rep. Albio Sires (D-NJ). Rahami said he was concerned about getting his wife an immigrant visa while her Pakistani passport has expired.

Sires’s office found out that at some point after this, Rahami’s wife got her visa, but the congressman doesn’t know what happened after.

According to two federal law enforcement officials, Rahami’s wife was overseas when the bombing occurred and heading back to the United States at the time. She was detained in the United Arab Emirates for questioning, these officials said.

The references in Rahami’s note to bin Laden, Awlaki and attacks like the Boston Marathon bombing and the absence of any mention of the Islamic State raises the possibility that he was perhaps inspired by al-Qaida, analysts said.

If anything, said Bruce Hoffman, a terrorism expert at Georgetown University, this may be “an al-Qaida-inspired or al-Qaida-linked connection.”

Even after Awlaki was killed in a 2011 drone strike in Yemen, his rhetoric continues to resonate online. His teachings have been implicated in numerous terrorist attacks, including the Fort Hood shooting in 2009 and the Boston Marathon bombing in 2013. Authorities say the gunman in Orlando earlier this year and one of the attackers in San Bernardino, Calif., last year had also viewed Awlaki’s lectures.

Rahami’s travel to Afghanistan and Pakistan between 2011 and 2014 also raises questions about whether Rahami was in some fashion radicalized while he was in South Asia, a possibility investigators are looking into.

Rep. Adam Schiff (D-Calif.), ranking member on the House Intelligence Committee, who has been briefed on the New York and New Jersey cases, said the current probe is “reminiscent” of the Boston Marathon case.

In 2013, two brothers planted pressure-cooker bombs packed with shrapnel near the marathon’s finish line. Investigators did not initially know whether the brothers – particularly the elder brother, who died in a confrontation with police – had contact with foreign terrorist elements. They were interested in his travel and he had previously come to the attention of the FBI.

“We were looking into whether we had missed something,” Schiff said in an interview. “We’re asking all those same questions again.”

Schiff said that a takeaway from this is that even the best efforts from intelligence agencies and law enforcement “can’t always catch people who mean to do us harm.”

“I can’t say one way or the other” whether the suspect had any contact with or direction from a foreign terorist group, U.S. Director of National Intelligence James Clapper said Tuesday. “I can’t point to external direction at this point.”

Earlier this year, Lynch also called the shooting rampage in Orlando a terrorist act. The following day, the FBI said it had investigated Omar Mateen, the Orlando gunman, for 10 months, ultimately closing the probe in March 2014 after agents determined he was not a threat. In addition to looking into people later linked to the Orlando attack and the Boston Marathon bombing, the FBI had scrutinized one of the gunmen who opened fire at an exhibition of cartoons depicting Muhammad last year.

The gun that was found on Rahami after his shootout was a 9mm Glock he bought in July while in Virginia.

It was not immediately clear why Rahami traveled to Virginia or his ties to the state. Police stopped a car Sunday night in New Jersey they said had been at a location associated with Rahami; an official said Tuesday that two of the five people in the car were from Virginia.