World U.N. Suspends All Convoys in Syria After Attack on Aid Trucks
World 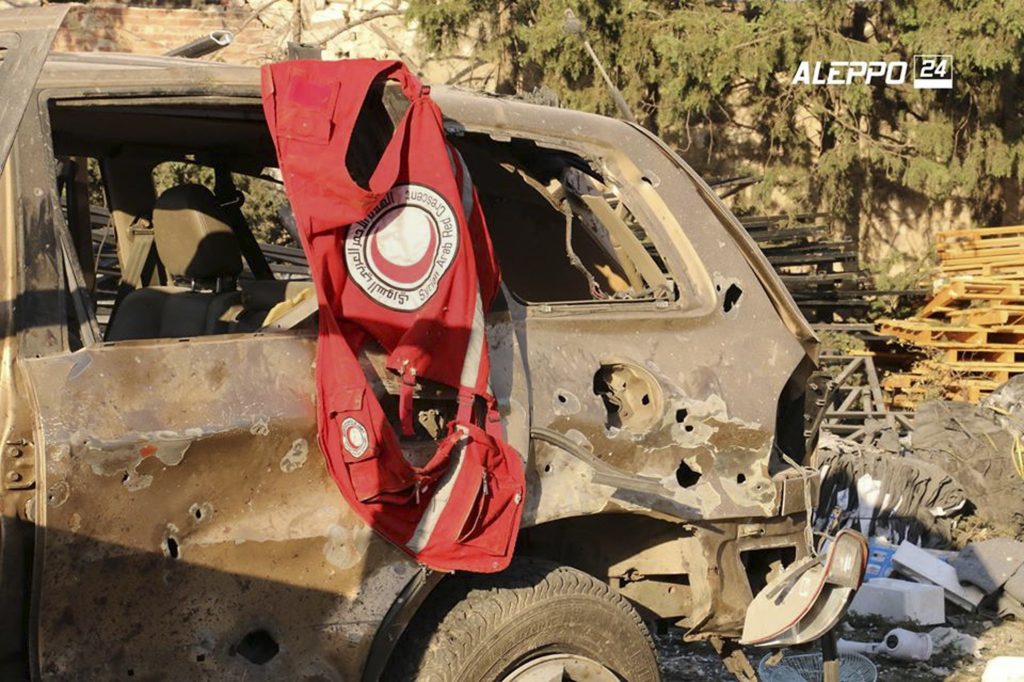 The attack plunged Syria’s U.S.-Russia-brokered ceasefire further into doubt. The Syrian military, just hours earlier, had declared the weeklong truce had failed. The United States said it was prepared to extend the truce deal and Russia — after blaming rebels for the violations — suggested it could still be salvaged.

In Geneva, spokesman Jens Laerke of OCHA (U.N. Organization for the Coordination of  Humanitarian Affairs) said further aid delivery would be on hold pending a review of the security situation in Syria in the aftermath of the airstrike. Laerke called it “a very, very dark day … for humanitarians across the world.”

The U.N. aid coordinator said the Syria government had granted needed authorizations in recent days to allow for aid convoys to proceed inside Syria. Humanitarian U.N. aid deliveries had stalled in recent weeks amid continued fighting, and the truce had not paved the way for expanded convoys as initially expected.

It was not clear who was behind the attack late on Monday, which sent a red fireball into the sky in the dead of night over a rural area in Aleppo Province. Both Syrian and Russian aircraft operate over Syria, as well as the U.S.-led coalition that is targeting the Islamic State terror group.

Rami Abdurrahman of the Britain-based Syrian Observatory for Human Rights, which tracks the civil war, and Aleppo-based activist Bahaa al-Halaby both said the attack killed 12 people.

Among the victims was Omar Barakat, who headed the Red Crescent in the town where the attack occurred, they said. The Syrian Civil Defense, the volunteer first responder group also known as the White Helmets, confirmed that casualty figure.

The convoy, part of a routine interagency dispatch operated by the Syrian Red Crescent, was hit in rural western Aleppo Province. The White Helmets first responder group posted images of a number of vehicles on fire and a video of the attack showed huge balls of fire in a pitch black area, as ambulances arrive on the scene.

U.N. officials said the U.N. and Red Crescent convoy was delivering assistance for 78,000 people in the town of Uram al-Kubra, west of the city of Aleppo. Initial estimates indicate that about 18 of the 31 trucks in the convoy were hit, as well as the Red Crescent warehouse in the area.

When asked who was behind the airstrikes, Abdurrahman said Syrian President Bashar Assad’s “regime does not have the capabilities to carry out such airstrikes within two hours.”

He said the airstrikes on Aleppo Province, including the ones that hit the convoy, were part of some 40 air raids that lasted about two hours — starting at about 7:30 p.m. Monday — and that “it was mostly Russian warplanes who carried out the air raid.”

Al-Halaby said that rebels in Aleppo Province also claimed Russian aircraft were behind the attack.

Abdurrahman said the convoy of about 30 trucks had crossed earlier from a government-controlled area and were hit from the air hours after they reached the Red Crescent warehouse. He said that some of the trucks were already emptied when the attack occurred and that in all, 20 trucks were destroyed or damaged.

A paramedic, speaking in a video released by Aleppo 24 News, a media collective, blamed Russian and government warplanes as well as Syrian army helicopter gunships that he said dropped barrel bombs.

Piles of white bags filled with flour were seen near one of the trucks.

Photos posted by Aleppo 24 News showed what appears to be an SUV riddled with shrapnel, its windshield blown out. Another one shows damaged trucks filled with bags parked in front what appeared to be a building. Others show three damaged trucks parked on the road.

Jan Egeland, humanitarian aid coordinator in the office of the U.N. envoy for Syria, told The Associated Press in a text message that the convoy was “bombarded.” Egeland added, “It is outrageous that it was hit while offloading at warehouses.”

U. N. Humanitarian Chief Stephen O’Brien called on “all parties to the conflict, once again, to take all necessary measures to protect humanitarian actors, civilians, and civilian infrastructure as required by international humanitarian law.”

A Red Crescent official in Syria confirmed the attack, but said no further information was available.

Also Tuesday, the Observatory said government forces launched an offensive in the Handarat area, just north of the city of Aleppo, in what appears to be an attempt to tighten the siege on rebel-held parts of Syria’s largest city.

Apart from the 12 killed in the convoy attack, 22 civilians died in attacks Monday across the province, according to the Observatory and Aleppo 24 News.