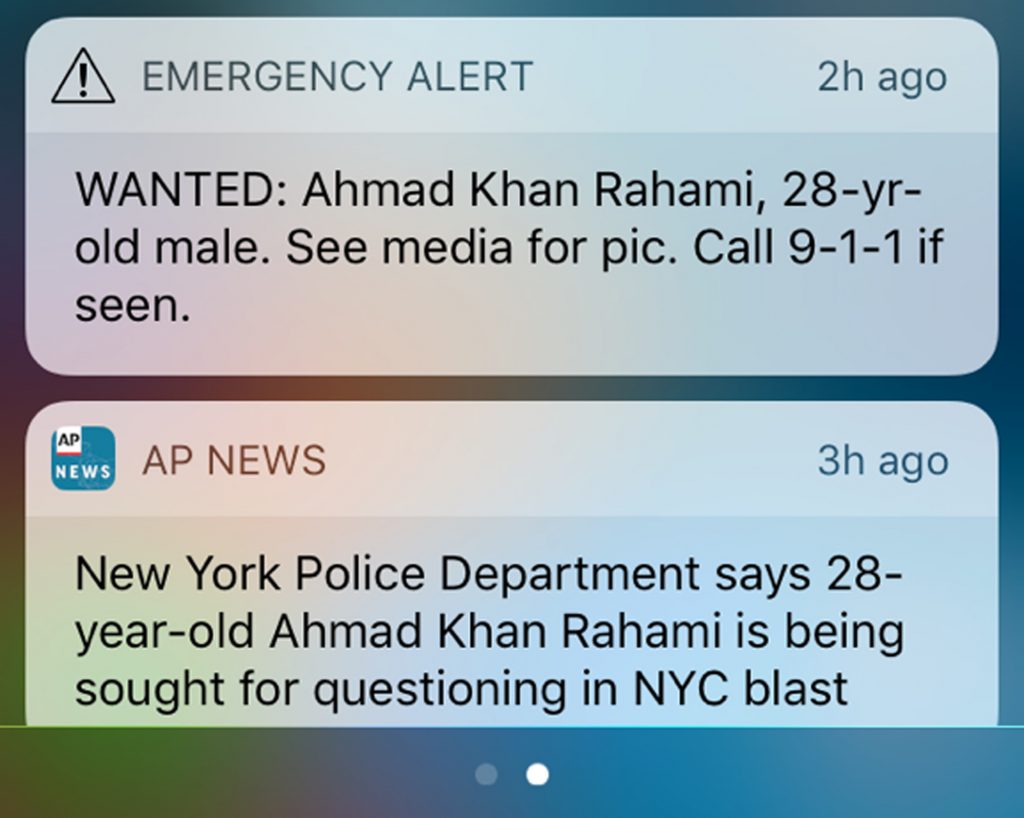 Many people in the New York City area were alerted Monday morning to a screeching, buzzing message about a man wanted in connection with explosions in the area over the weekend.

A Saturday explosion in Manhattan injured 29 people. Other devices were found in the New York City area but caused no injuries.

Police had him in custody later Monday, after a New Jersey bar owner reported a person asleep in the bar’s doorway.

What are these alerts and how do they work?

WHAT ARE WIRELESS EMERGENCY ALERTS?

According to the Federal Communications Commission, these text-like messages let cellphone users in a particular area receive notices about what are deemed critical emergencies. Messages can be about weather threats, Amber alerts for missing children or emergencies like a chemical spill.

The wireless industry, the FCC and the Federal Emergency Management Agency started this program in 2012, according to the wireless trade group CTIA.

FEMA said Monday that it was not the first time the system had been used to ring out a search for a dangerous suspect, but the agency could not immediately provide a past example.

HOW ARE THESE SENT?

FEMA authorizes messages from a local, state, federal, or tribal government agency and sends them on to wireless carriers. In this case, FEMA said the alert was issued by the New York Office of Emergency Management.

Messages appear on phones just like texts and are accompanied by a loud alarm. The phone also vibrates, which the FCC says helps people with hearing or vision disabilities. The alerts don’t count as texts, so people on limited text plans won’t get charged extra. Some phones, especially older ones, might not be equipped to receive these messages, though.

The alerts aren’t affected by network congestion and are based on cell tower locations, so if you’re on vacation in California, you won’t get alerts for New York, even if your phone is registered there. The FCC says targeting is typically down to the county level.

CAN YOU GET RID OF THEM?

The FCC says some alerts can be blocked, if the carrier allows it — but not alerts issued by the president. On iPhones, the setting is under “Notifications.” On Android, look for “Emergency broadcasts” under “Sound,” though your phone maker may have moved that. On Samsung’s Galaxy S7 phone, for instance, the setting is under “Privacy and Emergency.” Hit “Emergency Alerts,” then “More,” then “Settings.”

WHAT ARE DRAWBACKS OF THE SYSTEM?

The current technology supports only text and 90 characters. That leads to a slightly awkward phrase like “See media for pic” of Rahami, rather than a link to a photo or a photo itself being sent.

The FCC has proposed permitting longer messages, embedded links or possibly even images like maps. The wireless industry has said it is wary of including links because they could lead to network congestion or confused customers.