Business Can the 2017 Chevy Bolt EV Really Go 200-Plus miles With No Recharge? We Try It
Business 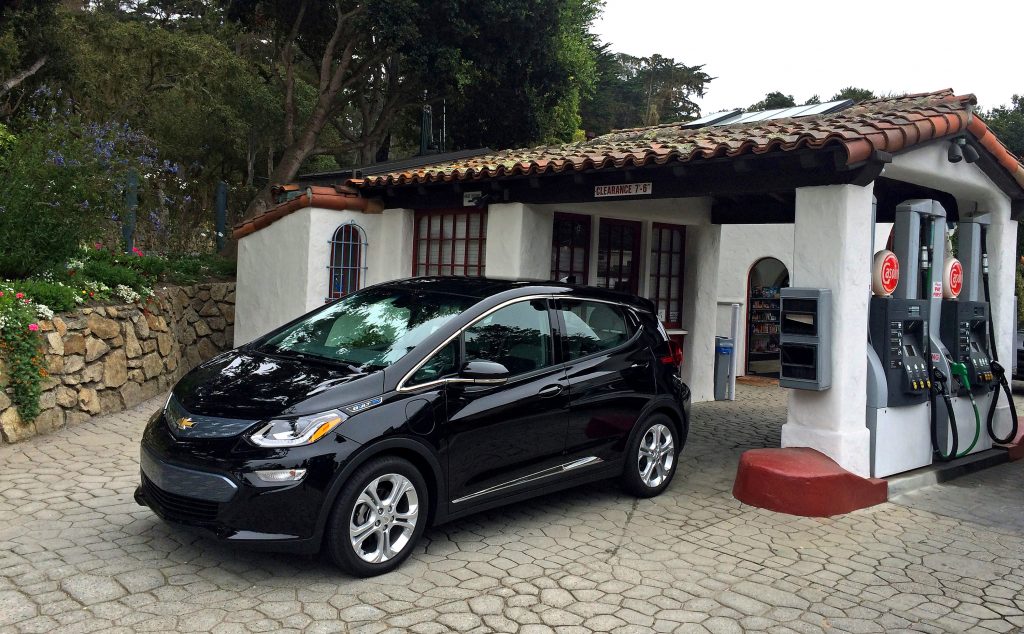 Chevrolet has announced an Environmental Protection Agency-approved range of 238 miles for its all-new, all-electric Bolt EV.

To find out, I got into a prototype of the 2017 Bolt EV and attempted to drive from Monterey to Santa Barbara without stopping to recharge — or running out of juice.

Along the route required by Chevy, that was a drive of 229 miles, including a mixed bag of two-lane highway, stretches of high-speed freeway, and some substantial ups and downs in elevation.

Monterey was cool and foggy as I hit Highway 1 and headed south. The Bolt EV was instantly likable. It’s quiet, comfortable and very easy to drive.

Building the 288-cell battery into the chassis of the Bolt made it possible for the designers to create lots of space inside the four-door, five-passenger hatchback.

There is ample leg and head room in the front and back seats, and a surfeit of storage space in the cabin. That’s due in part to the new “thin seat” design Chevy has incorporated. Unlike traditional car seats, the Bolt EV’s get their shape and support from internal springs, not padding. Though I found the fitting a little narrow, the thinner seats create more than an inch of rear compartment leg room, the company says.

Unlike earlier hybrids and battery electric vehicles, it also has a full-size trunk and back seats that fold flat to accommodate larger loads.

The Bolt sits high and is shaped like an SUV. The generous use of glass allows extremely good visibility, made better by the inclusion of a back-up camera borrowed from Chevy’s fellow General Motors brand Cadillac.

On city streets, the 60-KwH Bolt EV is peppy, applying ready torque to stop-and-go driving. On the highway, it settles into a calm purr.

Dashboard read-outs showed me how I was driving, and how I was braking, and the degree to which my driving style was saving or wasting electricity. At any given time, I was shown numbers for maximum range, minimum range and the range I could expect if I continued driving in the same manner.

Leaving Monterey, I was told those numbers were 266 maximum, 174 minimum and 225 average — four miles short of the entire journey.

So I had a slight flutter of “range anxiety,” that unhappy suspicion that I would run the battery empty before arriving at my destination.

A mandatory lunch stop was planned for Cambria, about 110 miles to the south along Highway 1. As I tooled along, I found my confidence rising. The gauges didn’t show the battery rate going down as fast as I’d feared.

Granted, I wasn’t traveling much above 50 mph most of the way, and was often going much slower. But when I got to Cambria, my max number was 204, my minimum 141 and my average 173.

It wasn’t just smart driving on my part. Other cars taking the same route had averages of 158 to 171 when they arrived at the lunch stop.

That number meant that if I drove the rest of the route more or less the same way, I’d probably be OK.

But after Cambria, the driving changed. Highway 1 flattened and straightened, through Harmony, Cayucos and Morro Bay. When I hit San Luis Obispo, I was instructed to hop onto the 101, where speeds were moving close to 70 mph. (The Bolt EV is electronically limited to a top speed of 92 mph.)

Going fast takes more juice. So does using the air conditioner, and below Cambria the sun had come out and the temperature was rising. So the battery level began to drop.

Following the Chevy route, I left the 101 below Pismo Beach and drove through the farming communities of Guadelupe and Orcutt, where speeds were closer to 55 mph. I tucked back onto the 101 at Los Alamos but left it again around Los Olivos.

Ahead was the San Marcos Pass, the shorter route to Santa Barbara, but also the steeper one.

Chevy’s people had said that when I reached the roundabout intersection of Highways 154 and 246, I must stop if I had less than 30 miles of driving range remaining — because I likely wouldn’t make it over the pass.

But I was good to go, with an average range number of 74 shown on the dashboard.

The pass took a lot out of the Bolt. At the crest, I was down to only 43 miles remaining. But elevation gives back much of what it removes. The Bolt’s regenerative braking system, which captures energy on downhill stretches, gave back another 10 miles of range before I hit the 101 again north of Santa Barbara.

I finished the drive with 240.5 miles on the trip meter, just above the EPA number of 238.

But the onboard computer said I could continue driving, perhaps for another 50 miles, bringing my total to over 290 miles.

That’s almost the range promised by the top-of-the-line Tesla Model S, the one that at $110,000-plus sells for approximately four times more than the Bolt EV is likely to cost.

Chevrolet has not set an official MSRP, but the company has said since first announcing the Bolt EV that it would retail for around $37,500. Since many buyers will qualify for state and federal tax credits or rebates, that cost could drop to $30,000 before tax, license and destination charges.

The EPA, in announcing the 238-mile range number, said the Bolt EV gets the equivalent of 128 mpg in the city, 110 on the highway and 119 combined. The agency set the recharge time at 9.3 hours — on a Level 2 fast charger.

Charging at home, which Chevy has said is the preferred method for about half of the owners of its current Volt plug-in hybrid, will take substantially longer. On a regular household 110-volt system, the Bolt EV charges at the rate of 4 miles of range per hour.

Doing the math, that suggests it would take roughly 59 hours to bring an empty Bolt EV back to full charge on a household plug.

On a Level 2 fast charger, that rate rises quickly, with the Bolt EV charging at the rate of 25 miles of range per hour. On a Level 3 fast charger, on the other hand, the battery can collect 90 miles worth of range in only 30 minutes.

Unlike Model S and Model X owners, Bolt EV drivers will not be able to take advantage of the Tesla supercharger network, which is proprietary to cars made by the Silicon Valley-based carmaker.

But Chevrolet has what Tesla does not — decades of experience, a massive national dealer network and more robust sales, service and warranty systems.

And the GM subsidiary has already sold more than 100,000 plug-in hybrid Volts. Some analysts believe the company could sell that many Bolt EVs in the first year.

Chevy executives stress that the Bolt EV can only succeed if it is seen as more than an electric car that’s good for the environment and will eliminate visits to the gas station.

“We knew it has to be a high-function, high-utility vehicle,” the company’s marketing director, Steve Majaros, said. “It really mattered that this car be a normal car, not a zippy-zappy electric vehicle.”

In other words, it had to be a good car on its own terms. At first glance, after about 10 hours’ drive time in a pre-production Bolt EV, I think Chevy may have succeeded.