Israel Hoteliers to Gov’t: Do Something About Vacation Apartments
Israel 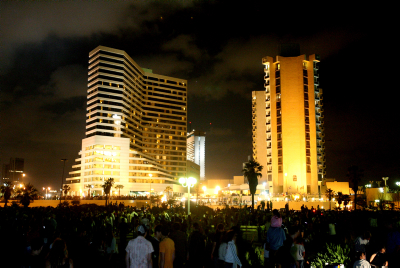 The occupancy rate in Israel’s 50,200 hotel rooms in 2015 was about 60 percent, with a total of NIS 4.6 billion spent by tourists from Israel and abroad on hotel stays, data from the Central Bureau of Statistics said. Foreign tourism was down 3 percent in 2015 compared to 2014, mostly due to the numerous stabbing terror attacks that took place in the first half of the year, experts said – but overnight hotel stays by tourists were down 11 percent in 2015 over a year earlier, according to data from Haaretz.

That was partially offset by an increase in the number of Israelis who stayed in local hotels last year – 4 percent more than a year earlier – but it still begs the question of where the foreign tourists who don’t check into hotels are staying.

The answer, according to Eli Golan, head of the Israel Hotel Association, is that they are staying in apartments that have been repurposed for vacationers. In a letter to Finance Minister Moshe Kachlon, Golan said that according to the Association’s estimates, as many as 20,000 dwellings are off the housing market, and instead are rented out to tourists from Israel and abroad – meaning higher prices for the purchase or rent of apartments that are still available.

Golan said that the government must step in to regulate the situation – otherwise, hotels will never recuperate. A law recently passed by the Knesset to encourage the construction of hotels throughout the country (except in the Tel Aviv area) will bring even more rooms online in the coming years, meaning that competition will increase. “The apartment owners are able to earn three times more by positioning their properties for tourists instead of [Israeli long-term] renters,” the letter said. “This situation is preventing the growth of the market and the establishment of new projects.”