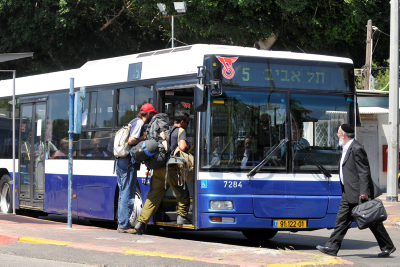 With new neighborhoods and new bus lines coming online on a regular basis – and Israeli roads getting more crowded all the time – it’s become difficult for bus companies to find qualified drivers. While the salaries of experienced, veteran bus drivers can be quite high, the entry level salaries are similar to those in many other businesses like banks and government offices – but the latter are much less stressful, which means even more difficulties for bus companies.

To beat the odds, the Dan bus company is offering a career path – complete with scholarships and even child care – to prospective drivers. Dan Chairman Shmuel Rafaeli understands the problem. “No one wants to work as a bus driver, especially in Tel Aviv, where we have most of our operations,” he told TheMarker. “You can easily find drivers in the periphery, but here in the metropolitan area where we really need them they are hard to come by.”

Beginning bus drivers earn NIS 39 per hour – respectable, but not particularly attractive. To make the deal more attractive, Dan is combing an unlikely source – universities, said Rafaeli. “We take them for a test drive, and if things work out, we offer them a scholarship. This may change some minds – showing them they can have a career with us, instead of what they had originally planned.”

Besides college students, the company is seeking to recruit mothers, especially of young children. “We can help pay for day care and nurseries.”

One reason the company is going to such lengths to hire new drivers is because of concern over its on-time schedule – which has suffered in recent years because of a lack of drivers. When buses are late, the company gets penalized financially. “We are paying plenty in fines,” said Rafaeli. “It’s worth it for us to pay for these programs to reduce that expense.”