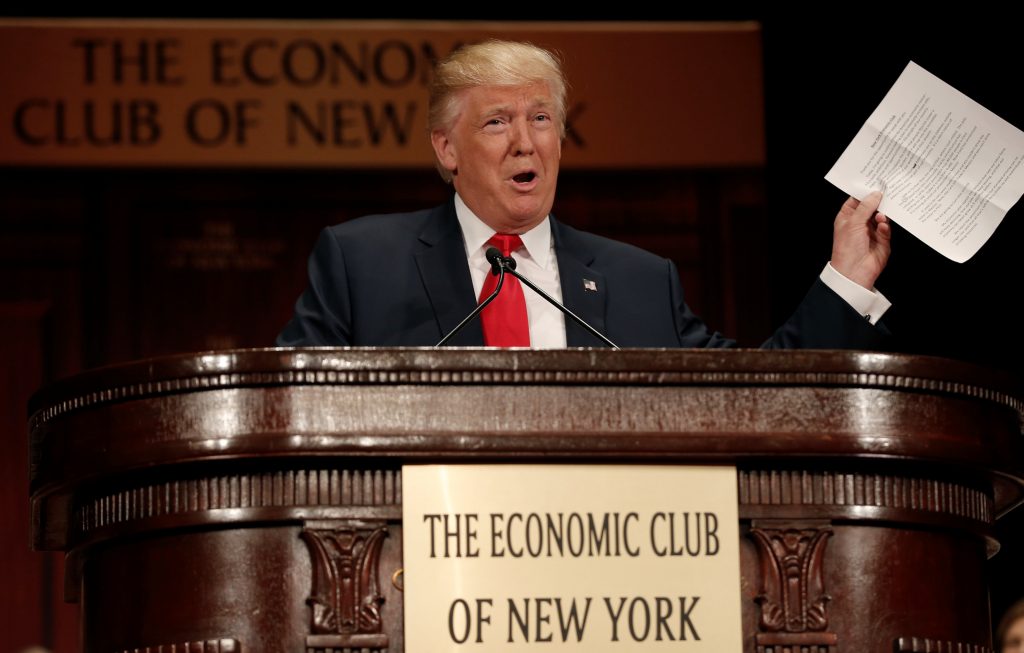 Republican presidential candidate Donald Trump put new details on a much scaled-back tax plan on Thursday, one that is projected to cost the federal government less money but also to deliver fewer benefits to taxpayers than Trump’s original proposal.

Trump’s economic team estimated that the complete tax plan, combined with rollbacks to some federal regulations and new initiatives to open up more public and private lands for oil and gas drilling, would deliver 3.5 percent growth per year for the next decade and produce 25 million new jobs.

The changes also appear to be an attempt to reduce what analysts had predicted would be a $1 trillion annual hit to federal tax revenue under Trump’s original, budget-busting plan.

The non-partisan Tax Foundation estimated Thursday that the plan would reduce federal revenues by $4.4 trillion over 10 years, or by $2.6 trillion after accounting for the additional economic growth it would generate. To offset those losses, Trump said he would generate even further economic growth via increased energy production and reductions in trade deficits, and that he would cut $1 trillion over a decade from the federal budget – without touching Social Security, Medicare, Medicaid or defense.

The new details include caps on the total amount of federal tax deductions that Americans may claim on their individual income taxes, a move targeted at limiting tax breaks for the highest income earners. The caps would be $100,000 a year in deductions for individuals and $200,000 for married couples filing jointly.

The plan would also more than double the size of the standard deduction on individual income taxes for most workers, a move that would effectively shield millions more Americans from having to pay federal taxes. The deduction would increase to $15,000 for individuals and $30,000 for married filers.

The expanded standard deduction could dramatically shift how Americans calculate their taxes. Matt Jensen, who directs the Open Source Policy Center at the American Enterprise Institute, estimated Thursday that the changes would reduce the number of filers who itemize their deductions from 45 million to 13 million.

Many other components of the plan appear unchanged from Trump’s most recent iteration of the proposal. It would reduce the number of federal tax brackets from seven to three, with rates of 12 percent, 25 percent and 33 percent, accordingly. The fact sheet released by the campaign did not say exactly what levels of income would be taxed at each rate, but said the cutoffs would largely match a proposal by House Republicans.

Trump would also reduce taxes on all business income, including both traditional corporations and so-called pass-through entities, to 15 percent. In a new detail released Thursday, he said U.S.-based manufacturers would be allowed to fully write off the costs of new plants and equipment from their taxes, to encourage investment, though if they chose to do so they would give up their ability to deduct interest expenses.

The plan continues to call for the abolition of the estate tax on inherited income.

The Trump team claimed in its release that the plan’s benefits would flow far more to the lowest-earning taxpayers than to the highest earners, as a share of the earners’ income.

Those projections could not be independently evaluated as of mid-day on Thursday.