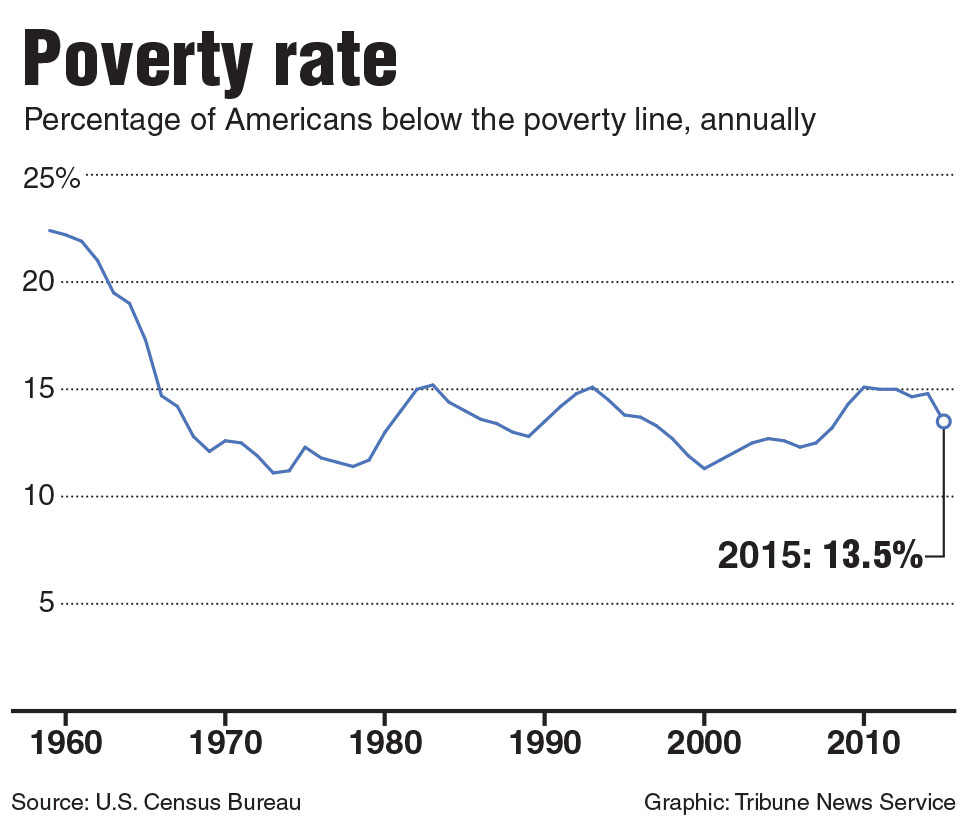 In its annual report on income and poverty, the Census Bureau said Tuesday that the share of people in the U.S. living in poverty dropped to 13.5 percent in 2015, marking one of the biggest annual declines in decades.

That was down from 14.7 percent in the prior year, but still considerably higher than the 12.3 percent poverty rate in 2006, the year before the Great Recession began, and the 40-year low of 11.3 percent in the year 2000.

The report also provided some encouraging news for a change on average American incomes. The median household income — the point at which half make more and half less — was $56,500 last year. That was up a substantial 5.2 percent from $53,700 in 2014, after adjusting for inflation.

American families still have some distance to go to recover fully from more than a decade of declining and stagnant earnings: The median household income was $57,900 in 1999.

“The good news is, maybe we’ve turned the corner,” said Sheldon Danziger, president of the Russell Sage Foundation, who, like other experts following poverty and income issues, had expected some improvement but nothing this large.

“I’m certainly more optimistic than I’ve been in a long time,” he said of the broad-based gains in income and poverty measures. “The prospects look good, at least for 2016 for being an improvement over 2015.”

The Bureau also reported Tuesday that the number of people in the U.S. without health insurance fell further last year to 9.1 percent from 10.4 percent in 2014. The drop was expected, thanks mostly to the Affordable Care Act, known as Obamacare, which saw its second full year of impact in 2015.

With many more Americans signing up for private insurance through new marketplaces created by Obamacare, the number of people who were uninsured for part or all of last year came down to 29 million, from 33 million without medical coverage in 2014.

Some of the health-insurance gains likely came from more people working last year in full-time jobs, which generally provide some form of employment-based medical coverage.

An increase in people with full-time, year-round work last year, and higher minimum wages pushed through in some parts of the country, almost certainly helped boost median household incomes.

Still, slow economic and productivity growth have hampered wage gains. And many households that once had middle-class incomes have not recovered since losing work in manufacturing and other higher-paying jobs, with some of them dropping out of the labor force and becoming impoverished.

The nation’s poverty rate reached a two-decade high of 15.1 percent in 2010, a year after the Great Recession ended. In sheer numbers, the poor in America peaked at 46.7 million adults and children in 2014. That declined to 43.1 million last year.

The Census Bureau records children and adults as poor if they are living in households below the poverty line, which was about $24,000 for a family of four. The Bureau’s poverty measure does not count non-cash incomes such as food-stamp benefits and tax credits.