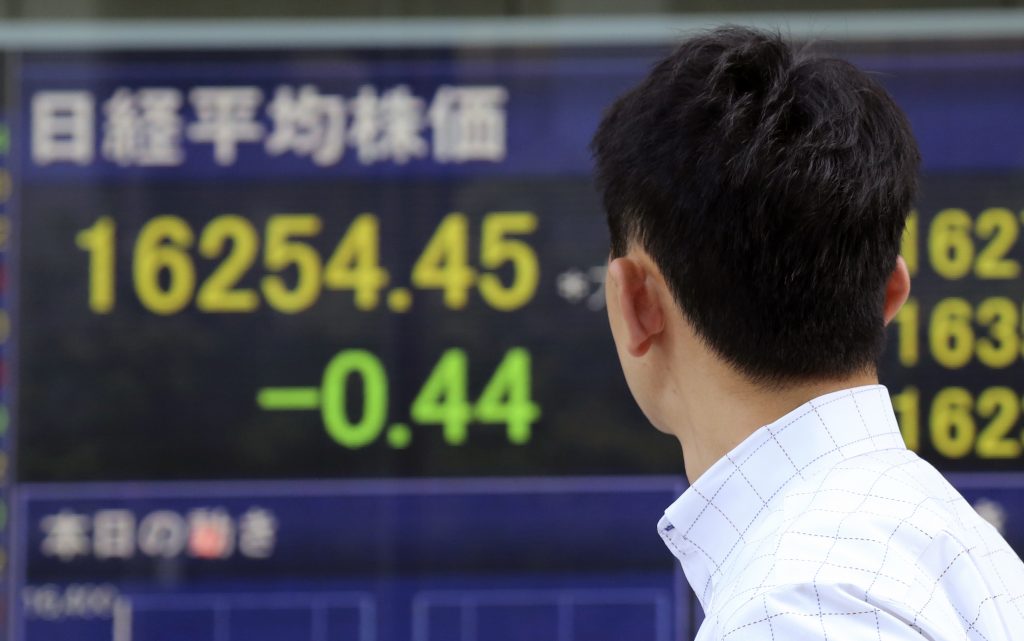 Asian stocks suffered their sharpest setback since June on Monday as investors were rattled by rising bond yields and talk the Federal Reserve might be serious about lifting U.S. interest rates as early as next week.

Reports that the Bank of Japan was considering ways to steepen the Japanese yield curve, along with worries that central banks more generally were running short of fresh stimulus options, hit sovereign debt and risk appetite globally.

MSCI’s broadest index of Asia-Pacific shares outside Japan fell 2.4 percent, pulling away from a 13-month peak. It was the largest daily drop since the frenzy caused by Britain’s vote in late June to leave the European Union.

On a technical basis the index had been overbought in recent sessions, leaving it vulnerable to a pullback. Hong Kong, Shanghai and Australian stocks followed with falls of more than 2 percent.

The Nikkei 225 lost 2 percent as the safe haven yen firmed and selling in bonds drove yields on 20-year JGBs to the highest since March.

Traders were unsure how the BOJ would try to steepen the yield curve if it goes down that path at a policy review later this month, but markets are worried that tapering off its buying in long-dated bonds could be among the options.

EMini futures for the S&P 500, traded in Chicago during Asian hours, swung 0.6 percent lower, though Treasuries were finding safe-haven demand.

Some Fed members have been trying to convince markets that the September meeting would be “live” for a hike, even though futures only imply a one-in-four chance of a move.

No fewer than three Fed officials are expected to speak later in the day, including board member and noted dove, Lael Brainard. Any hint of hawkishness would likely further pressure bonds and equities.

“Market participants are wondering if maybe she (Brainard) is being wheeled out to give the market one last warning of a rate hike at next week’s meeting,” said Marshall Gittler, head of research at broker FXPRIMUS.

“The thinking is that if someone as dovish as she is starts talking like a hawk, people will notice. Her speech will be closely examined.”

Such risks led Wall Street’s fear gauge, the VIX index , to its highest close since late June on Friday. The Dow shed 2.13 percent on Friday, while the S&P 500 lost 2.45 percent and the Nasdaq 2.54 percent.

Super-low yields have made returns on equities seem relatively more attractive in comparison, so any sustained climb in yields would likely weigh on stock valuations.

The yield on benchmark German debt, for instance, had turned positive for the first time since July 22 and ended at 0.02 percent, its highest since June 23. Yields on U.S. 10-year and 30-year paper hit 11-week peaks.

In the forex market, the sudden bout of risk aversion benefited perceived havens such as the yen while hitting carry trades in higher yielding currencies including the Australian dollar.

The euro was sidelined on the dollar at $1.1242 after weak German trade data dragged it down from $1.1271 on Friday. The dollar index, which tracks it against a basket of six currencies, eased fractionally to 95.265.

Adding to the jittery mood on Monday was news that Democratic candidate Hillary Clinton fell ill at a Sept. 11 memorial ceremony and had been diagnosed with pneumonia.

Markets have generally assumed Clinton would win the presidency and have not truly considered the implications, both economic and for national security, should Donald Trump prevail.

Geopolitical concerns had already been inflamed by North Korea’s fifth and biggest nuclear test, ratcheting up a threat that its rivals and the United Nations have been powerless to contain.