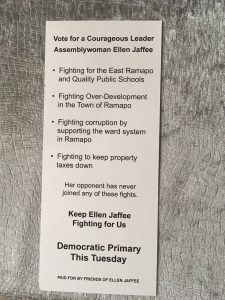 Monsey’s Orthodox community leaders are getting behind the candidacy of a Democratic primary opponent of Assemblywoman Ellen Jaffee, citing her efforts to stir up local residents against the community and attacks on yeshivos.

The primary Tuesday features Thomas Gulla, a 57-year-old Airmont Planning Board member and high school teacher. He is challenging the five-term incumbent, her first significant electoral challenge in 10 years.

The community has been divided in past years whether to support Jaffee, who had support from some kehillos in Rockland. But events these past two years has led to a remarkable unity among the kehillos, who decided earlier this week to back Gulla.

Jaffee has become somewhat of a leader of the anti-yeshivah caucus in the state legislature, introducing bills for strict oversight over the East Ramapo school board and taking other anti-yeshivos measures.

One particular law has concerned yeshivah advocates across the state. Proposed in May, the legislation would direct the state Education Department to remove students from yeshivos whose secular education level is not “substantially equivalent” to that of public schools. The students may be forced to attend local public schools or regarded as truant, and the school would lose all state funding.

In the past, she has falsely accused the Orthodox community of busing in people from Brooklyn to vote. During an Assembly hearing this year, she was asked by Assemblyman Phil Goldfeder if Orthodox Jewish voters are legitimate. “It’s questionable,” she responded. Video of the exchange is on the Assembly’s website.

“She’s been campaigning against the community,” one local askan, who spoke to Hamodia on condition of anonymity, said Monday. “She sent out campaign mail this week with nine items — all nine were against the Jewish community in some way.”

One mailer (view at left) called Jaffee “a courageous leader” for, among other things, “fighting” against
“Over-Development in the Town of Ramapo,” “and “for the (sic) East Ramapo and Quality Public Schools.”

Wieder is having a rematch against Krystal Serrano in the Democratic primary to represent parts of Ramapo and Orange County, which includes Kiryas Joel and Spring Valley. Wieder lost two years ago by 68 votes.