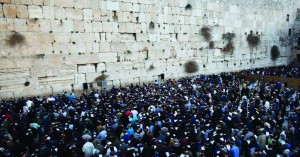 Askanim expressed angst and urged the American Jewish community to take action after justices on Israel’s High Court pressed the Israeli government on the highly controversial pluralistic prayer plan for the Kosel.

Supreme Court President Miriam Naor, Justice Elyakim Rubinstein, and Justice Hanan Melcer heard arguments on Monday morning on a 2013 petition against the Western Wall Heritage Foundation and the Prime Minister’s Office brought by Women of the Wall and the Conservative and Reform movements.

“Enough is enough,” Naor was quoted as saying, referring to the government’s inaction on implementing a plan signed by the state on January 31, 2016, to provide a permanent pluralistic prayer section at the Kosel in the area commonly called Robinson’s Arch.

“Do you expect us to extract the chestnuts from the fire for you?” Naor asked the state attorneys at the hearing.

“My impression is that we are expected to pull the chestnuts out of the fire. But that is the responsibility of the government. It is an issue that needs to be escalated to the appropriate level, because we’re talking about the Kosel. Things aren’t moving.”

According to Rabbi Pesach Lerner, executive vice president emeritus of the National Council of Young Israel, “this should be a wake-up call to the Torah community; things are going to happen around us, and it is important that we get involved, that we react.

“We can no longer put our head in the sand. This is an issue that has been boiling for years and unfortunately many of us — both an organizational level and as individuals — have ignored it.

“This crisis issue was brought about because of by pressure by the American liberal community,” he stressed. “They have spent countless hours and resources getting to where they are today, while with a few exceptions, we have sat back and observed from the sidelines.

“It isn’t enough to be concerned about the issue; if we don’t act upon that concern, I am afraid to say that our concern is meaningless,” Rabbi Lerner warned.

At the hearing, Justice Rubinstein pressed state representative attorney Nachi Ben-Or for answers. “What is actually happening?” he asked. “In January, the government made a decision. Afterwards, there were a few disagreements, followed by a meeting at the Prime Minister’s Office at the end of June.

“As regards these regulations, is there any chance in the world that the Religious Services minister will sign them or do we have to do something to get someone else to sign them?”

At the end of the hearing, he asked Ben-Or to “pass on the essence of what was said here to the appropriate people, so this issue can be brought to a dignified conclusion.”

“Those who don’t want pluralism will go to the northern plaza and those who do to the southern plaza,” he said.

Rabbi Lerner cautioned that “this is only the beginning. If you think you can give them a finger they will then leave us alone, trust me, they are going for your wrist and the arm in very short order; all we have to do is listen to what they themselves are saying … The agenda of the Reform and their associates starts with the Kosel and continues to Shabbos, to conversion, marriage, kashrus, burial and everything we hold dear and holy.

“This is a war for the soul of Eretz Yisrael,” he declared. “I don’t claim to have the answers. Precisely what has to be done — that has to be left up to Gedolim and Manhigei Yisrael, but this issue must become a priority for American Torah Jewry.”