World Ahead of Truce, Assad Vows to Retake Syria From ‘Terrorists’
World 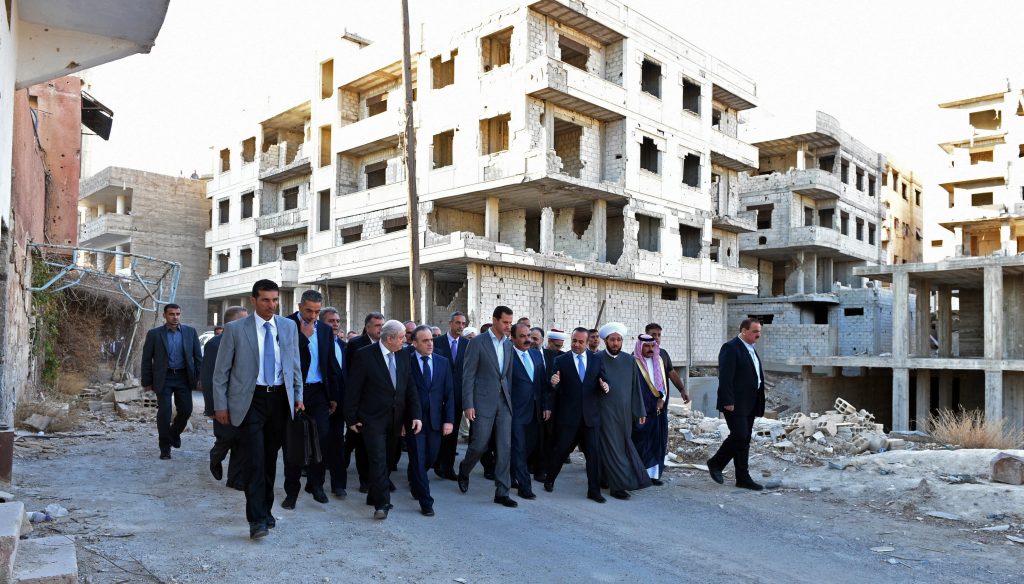 Syrian President Bashar Assad vowed on Monday that his government would take back land from “terrorists” and rebuild the country, in remarks made just hours before the start of a ceasefire brokered by the United States and Russia.

Assad spoke during a rare public appearance in the Damascus suburb of Daraya, which had surrendered last month and reverted to government control after a four-year siege.

But in the buildup to the start of the truce at sunset, government forces and their allies bombed opposition areas in the country’s north, while al-Qaida-linked terrorists pushed on with an offensive in southern Syria.

In Geneva, the U.N. envoy for Syria said his office would monitor the start of the ceasefire “carefully, before making any hurried comments.” Staffan de Mistura said in a text message to The Associated Press on Monday that no statement from his office about the truce was expected before the following afternoon.

The ceasefire deal, hammered out between U.S. Secretary of State John Kerry and Russian Foreign Minister Sergei Lavrov in Geneva on Saturday, was backed by Assad’s government. But it has received mixed messages of commitment from various rebel factions.

It allows the Syrian government to continue to strike at the Islamic State terror group and al-Qaida-linked terrorists with the Jabhat Fatah al-Sham group, earlier known as the Nusra Front, until the U.S. and Russia take over the task in one week’s time.

Under the terms of the agreement, the rebels and the Syrian government are expected to stop attacking one another. Assad’s key allies — Russia, Iran and the Lebanese terror group Hizbullah — have also endorsed the deal.

But that scenario is complicated by the fact that Jabhat Fatah al-Sham remains intertwined with several other groups fighting on the ground.

One of the more immediate goals of the Kerry-Lavrov agreement is to allow the U.N. to establish aid corridors into Aleppo, the contested northern Syrian city. Over 2,000 people have been killed in fighting over the past 40 days in the city, including 700 civilians and 160 children, according to a Syrian human rights group.

On Saturday, presumed Russian or government airstrikes on rebel-held Idlib and Aleppo provinces killed over 90 civilians, including 13 children, in an attack on a marketplace in Idlib, according to the Britain-based Syrian Observatory for Human Rights.

In the aftermath, rebels and opposition activists were asking on Sunday whether the government side could be trusted.

Several previous negotiated ceasefires have all eventually collapsed. A partial “cessation of hostilities” that brought sorely needed relief to civilians in March unraveled as the government continued to strike targets in opposition areas, including near a hospital and school near Damascus and a marketplace in Idlib province, killing dozens of civilians.

Previous ceasefires were also preceded by soaring violence as parties on all sides sought to improve their positions in the buildup to the start of the truce. Over a quarter-million people have been killed and around half the population of 11 million has been displaced in Syria’s civil war, now in its sixth year.

In Turkey, meanwhile, President Recep Tayyip Erdogan reiterated his earlier calls for establishing a no-fly zone in northern Syria, saying it is essential to boosting security in the area.

Erdogan said he told the leaders of Germany, France, Russia and the U.S. that training and equipping troops on the ground to battle back Islamic State group forces is “not enough” and that a no-fly zone should be the next step.

Speaking on Monday, Erdogan said Turkey remains resolute in eliminating the threat posed by the Islamic State group at its borders and has made that clear to world leaders.

Turkey launched an incursion into northern Syria in late August, driving IS away from the border and also seeking to counter the advance of U.S.-backed Kurdish forces, which Ankara views with suspicion.