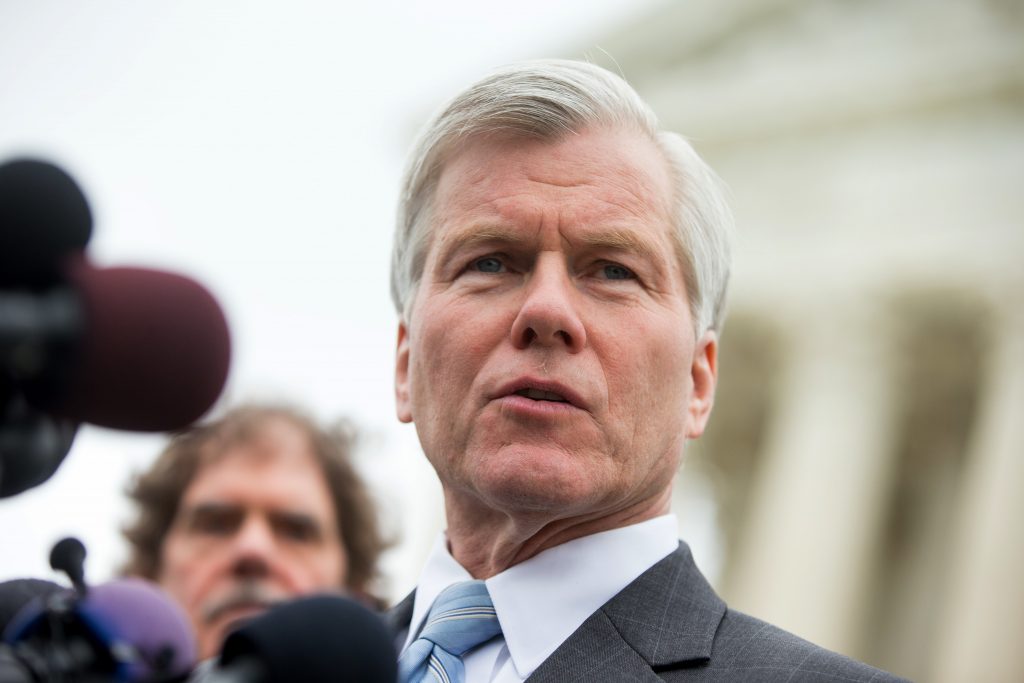 Federal prosecutors dropped their corruption case against former Virginia Gov. Bob McDonnell and his wife on Thursday, more than two months after the U.S. Supreme Court overturned his conviction.

Prosecutors indicated in court filings they do not want to pursue a second trial against the couple.

“After carefully considering the Supreme Court’s recent decision and the principles of federal prosecution, we have made the decision not to pursue the case further,” U.S. Attorney Dana J. Boente’s office said in a statement.

The decision ends a years-long legal saga for the former governor and once-rising Republican star, who was convicted in 2014 of violating federal bribery law by accepting luxury gifts and loans from a wealthy businessman in exchange for promoting his dietary supplement.

“Throughout this ordeal I have strongly proclaimed my innocence. I would never do, nor consider doing, anything that would violate the trust of the citizens of Virginia I served during 22 years in state elected office,” McDonnell said in a statement. “These wrongful convictions were based on a false narrative and incorrect law.

McDonnell and his wife, Maureen, were found guilty of doing illegal favors for wealthy vitamin executive Jonnie Williams in exchange for more than $165,000 in gifts and loans.

But the high court unanimously held in June that McDonnell’s actions were distasteful but didn’t necessarily violate federal bribery laws.

Williams, who was seeking state university research on his company’s signature anti-inflammatory product, loaned the couple tens of thousands of dollars to help them pay debts and keep their money-losing Virginia Beach vacation rental properties afloat. Williams bought nearly $20,000 in designer clothing and accessories for Maureen McDonnell and a Rolex watch for Bob McDonnell. He also paid for trips and golf outings for the couple and their children, and gave $15,000 for catering at McDonnell daughter’s wedding.

At issue in McDonnell’s case was a federal bribery law that makes it illegal for a public official to agree to take “official action” in exchange for money, gifts and other things of value.

In vacating McDonnell’s conviction, the Supreme Court ruled that setting up a meeting or organizing an event — without doing more — isn’t considered an “official act.”

While McDonnell’s actions may have been “distasteful,” Chief Justice John Roberts wrote that the high court’s concern “is not with tawdry tales of Ferraris, Rolexes and ball gowns,” but with “the broader legal implications of the government’s boundless interpretation of the federal bribery statute.”

Several state lawmakers and members of Virginia’s congressional delegation had urged Attorney General Loretta Lynch not to retry McDonnell, arguing that he and his family have suffered enough. Democratic Gov. Terry McAuliffe has also questioned the need for another case.

“It is time to move on,” McAuliffe said after the Supreme Court decision. “This man has paid the price.”

Prosecutors also decided to drop charges against Maureen McDonnell, who was sentenced to one year in prison. A federal appeals court put her case on hold until the Supreme Court examined her husband’s case.

Legal experts said the decision not to pursue a second trial was not a surprise given the high court’s ruling.

Barak Cohen, a former Justice Department public corruption prosecutor, said the decision was “exactly what I think anybody would have expected given an understanding of the evidence at trial and the Supreme Court’s ruling.”

He said prosecutors were “incredibly aggressive” in bringing a case given the apparent absence of overt official acts taken by McDonnell on Williams’ behalf.

“The prosecutors in that case are smart and aggressive and if they could have brought a case based on more conventional evidence of bribery — the kind of case they usually bring — they would have brought it,” said Cohen, now an attorney in private practice.

Liberal watchdog group Citizens for Responsibility and Ethics in Washington denounced Thursday’s decision, saying it sent a “clear signal” that public officials will not be held accountable when they abuse their office.

But others disputed that idea, saying the dismissal of McDonnell’s case won’t give public officials a license to take bribes. Chuck James, a former prosecutor now in private practice, noted that the McDonnell ruling hasn’t led to the dismissal of corruption charges of other politicians, like former Illinois Gov. Rod Blagojevich.

“True quid pro quo has always been and will remain a prosecutable case,” James said.