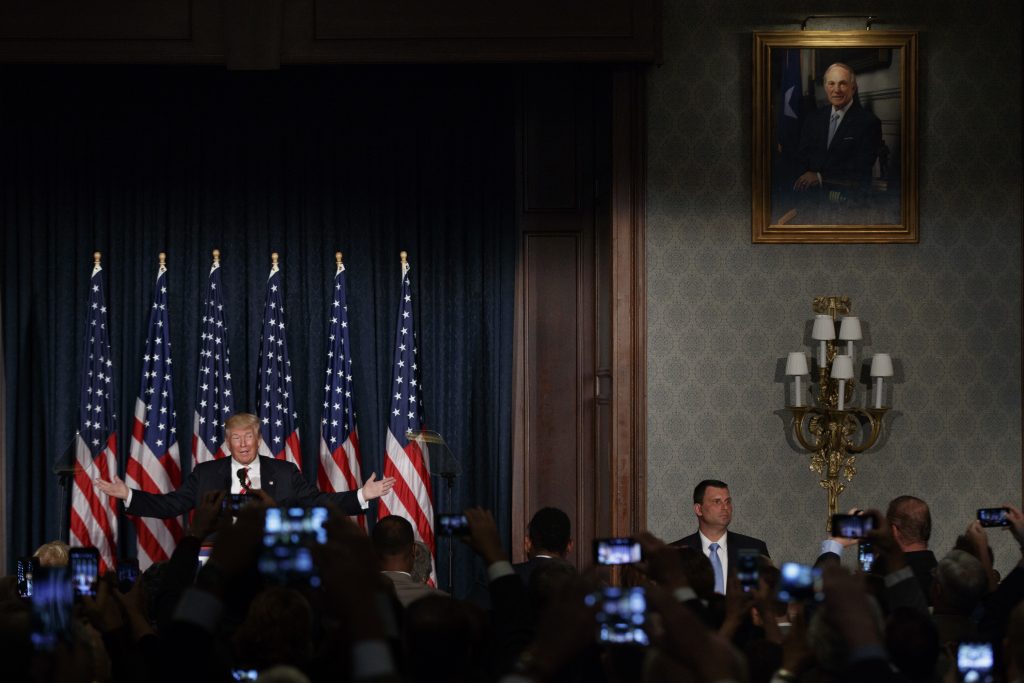 Republican Donald Trump vowed to boost military spending by tens of billions of dollars on Wednesday, outlining plans for major increases in the number of active troops, Navy ships and submarines, and fighter planes, as he works to convince skeptics in both parties that he’s ready to lead the world’s most powerful military.

The New York businessman, who has struggled at times to demonstrate a command of foreign policy, also seemed to acknowledge he does not currently have a plan to address cyber security or the Islamic State terror group.

If elected, Trump said he would give military leaders 30 days to formulate a plan to defeat IS. And he would ask the joint chiefs of staff to conduct a review of the nation’s cyber defenses to determine all vulnerabilities.

Trump’s address came hours before his national security acumen is tested at a “commander in chief” forum on NBC.

“We want to deter, avoid and prevent conflict through our unquestioned military strength,” Trump declared in his Wednesday speech, delivered inside the Union League of Philadelphia.

The appearances mark an intense, two-day focus on national security by Trump, who has offered tough rhetoric on America’s challenges abroad, but few details.

The United States currently spends more than $600 billion a year on the military, more than the next seven countries combined.

Trump’s rival, Democrat Hillary Clinton, has tried to paint the billionaire businessman as erratic, making the case that his disposition would be a major liability on the world stage.

“They know they can count on me to be the kind of commander in chief who will protect our country and our troops, and they know they cannot count on Donald Trump,” Clinton said Tuesday. “They view him as a danger and a risk.”

Trump’s team has worked aggressively in recent days to deflect such criticism back at Clinton.

“She’s trigger-happy and very unstable,” Trump said of his Democratic opponent, calling her use of a private email server while secretary of state “reckless.”

While Clinton and Trump will be featured at the Wednesday night forum, they will appear at separate times and will not face each other on stage. The forum could serve as a warm-up to their highly anticipated first presidential debate, scheduled for Sept. 26 in New York.

Trump will deliver another speech Wednesday evening, at the convention of New York’s Conservative Party.

Trump’s Union League address also included his plans to eliminate deep spending cuts, known as the “sequester,” enacted when Congress failed to reach a budget compromise in 2011. Republicans and Democrats voted for the automatic, across-the board cuts that affected both military and domestic programs.

Trump has given mixed signals about whether he wants to increase military spending overall.

While Trump has often complained that U.S. forces are not large enough or well-equipped, he’s also said that he’d save money by cutting waste and ensuring that contractors aren’t getting sweetheart deals because of their connections or lobbying efforts.

His position on the sequester has been even more murky. Trump expressed support for the cuts in interviews in 2013 — even describing them as too small — but seemed to suggest at the time that military spending should be exempt, undermining the sequester premise.

A senior adviser, speaking on the condition of anonymity to share details ahead of the speech, said Trump would ensure the additional spending is fully paid for. The adviser did not explain how, but suggested there would be no need for structural budget cuts to pay for the billions of additional military spending over 10 years.

Even before promising a huge boost in military spending, Trump’s plans to cut taxes, expand infrastructure spending and leave untouched entitlement programs such as Social Security already threatened to add trillions of dollars to the federal deficit.

Trying to emphasize his military support, Trump’s campaign released a letter on Tuesday from 88 retired generals and admirals citing an urgent need for a “course correction” in America’s national security policy. It was aimed at rebutting Clinton’s arguments that she would be best positioned to lead the military and reassuring Republicans who have openly worried that his provocative statements might undermine U.S. alliances.

But questions remain, even in his party.

Bob Corker, the Republican chairman of the Senate Foreign Relations Committee, repeatedly refused to say directly whether he had confidence in Trump as commander in chief when questioned on MSNBC on Wednesday.

“I do believe that Donald Trump is growing in his understanding of these issues and I think that he’s beginning to get more and more people around him that have a depth of understanding as to the complexities and I’m watching this evolve,” he said. He added that, “we’ll all make our assessments,” in the candidates’ foreign affairs abilities by early November.

Jill Colvin in Newark, New Jersey, contributed to this report.