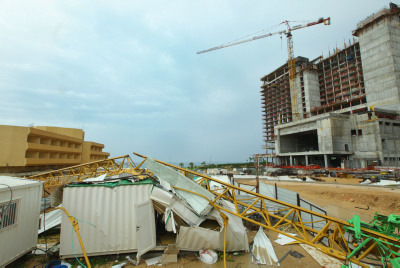 Police on Wednesday arrested the Mayor of Netanya, Miriam Feirberg, as part of a corruption investigation that has been ongoing for the past several days. Feirberg was arrested after she was questioned at length about a corruption case surrounding several real estate deals she participated in.

Feirberg was questioned on matters relating to her involvement in the scandal, after others who were questioned alleged that she had profited from a real estate deal she approved on behalf of a contractor. She is accused of receiving a bribe, money laundering, and of attempting to destroy evidence. Police said they plan to ask for an extension of her remand.

Several other senior officials in Netanya’s municipal administration have been questioned as well, and several arrests have been made in the case. Four of the suspects are to brought to court Wednesday afternoon for an extension of their remand as well.

According to police, senior officials in the administration took action to promote projects being built by several real estate contractors, allowing them to skip regulatory steps and looking the other way on inspections. In return, the suspects allegedly got payoffs, in the form of cash and property. Feirberg herself is said to have received several lots and an apartment in one of the projects.

In a statement, Feirberg’s attorney said that the mayor “has been running the city for 18 years and has worked in the municipal administration for 24 years at various tasks. Feirberg has always acted honestly and with good faith, and never has any accusation of impropriety been proven against her. I am positive that her innocence will be proven this time as well.”