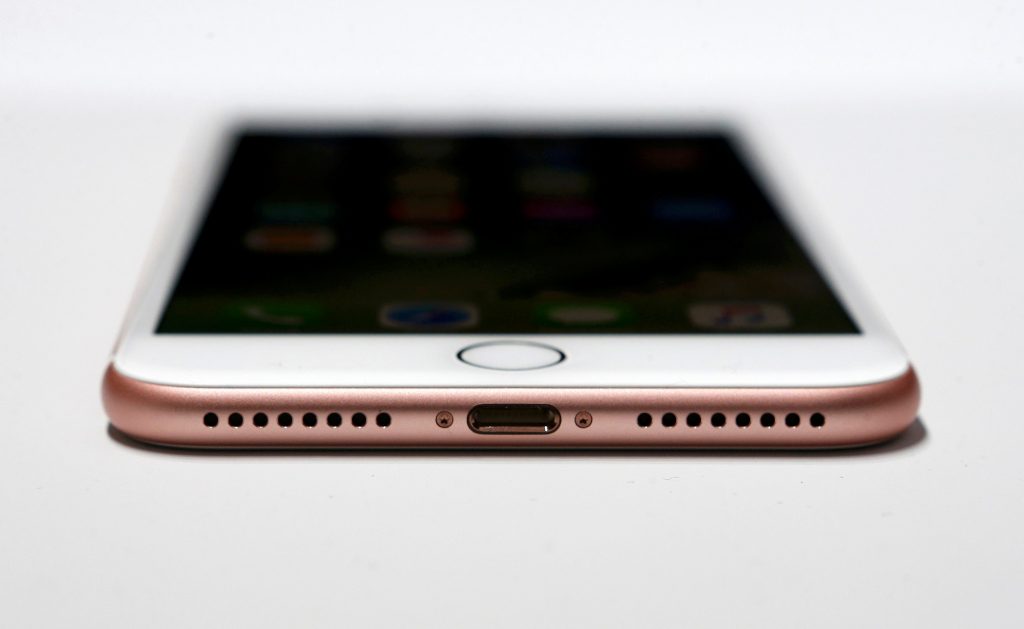 Apple’s latest iPhone may be more notable for what’s missing from previous models than what’s being added. The iPhone 7 and 7 Plus unveiled Wednesday won’t have an analog headphone jack — a longtime staple in just about every consumer electronics device that can play audio.

In doing so, Apple is betting that its legions of loyal fans will embrace the shift to wireless headphones — or, if they insist on sticking with their old ways, that they won’t mind using earbuds that plug into the iPhone’s power port, or older headsets in conjunction with a new adapter.

The redesigned earbuds — with cord — will be included with the new iPhones. Also in the box: an adapter consisting of two plugs connected by a short length of cable, which will connect older headphones to the charging port.

But Apple is trying to push consumers to cut the cord with their headphones and make the leap into what it envisions as a “wireless future.”

“The reason to move on is courage,” said Philip Schiller, Apple’s senior vice president of worldwide marketing. “The courage to move on and do something new that will benefit all of us.”

As part of the transition, Apple also is introducing wireless “AirPods” that will sell for $160.

Getting rid of the 3.5 millimeter headphone jack helped Apple make its new iPhone slimmer, boost its battery lifetime and add other improvements, including stereo speakers and a sharper camera. The iPhone 7 is also water-resistant, a popular feature that rivals such as Samsung Electronics already have been offering.

Apple is trying to reverse its first decline in iPhone sales since the company’s late founder, Steve Jobs, unveiled the trendsetting device in 2007.

Apple sold nearly 92 million iPhones during the first six months of this year, or about 15 percent fewer than the same period last year. Industry analysts blame the downturn on last fall’s uninspiring rollout of the iPhone 6S and 6S Plus, neither of which included enough compelling feature to persuade consumers to replace the phones that they already owned.

BEEN THERE, DONE THAT

Now the iPhone 7 and 7 Plus may be plagued by the same syndrome.

Phone advances from Apple, Samsung and other smartphone makers in recent years are becoming so run-of-the-mill that BGC analyst Colin Gillis says the industry is gradually losing its ability to dazzle consumers. That’s something Jobs was famous for whenever he showed off new products.

In a Wednesday research note, Gillis predicted that shopping for a new smartphone is becoming “like buying a microwave – something people do, but not a major event.” He believes Apple’s iPhone sales could decline by 5 percent during the next year.

If that happens, it will be bad news for Apple, the world’s most valuable company. It relies on the iPhone for two-thirds of its revenue, partly because the company hasn’t been able to come up with another breakthrough innovation under the leadership of CEO Tim Cook, Jobs’ hand-picked successor.

Piper Jaffray’s Gene Munster is among the industry analysts predicting more dramatic changes to the iPhone next fall to herald the 10-year anniversary of the first model.

The most significant upgrades to this year’s models include a faster processor and a better camera, upgrades that Apple typically makes every year. The more expensive and larger iPhone 7 Plus boasts the biggest change, with two digital camera lenses. One will be for wide-angle views and the other will have telephoto capabilities, which Apple says will zoom in by up to 10 times while still providing the same clarity as a shot on the standard distance setting.

The new iPhones will debut Sept. 16 in the U.S., China and more than two dozen other countries. Orders will start this Friday.

The phones will offer more storage than earlier models. As people store more photos and video on their phones, Apple is taking a cue from rival phone makers and offering its starter model with 32 gigabytes of storage. It’s still priced at $650 for the iPhone 7 and $770 for the larger Plus model.

Those who aren’t getting a new iPhone will still see improvements with a new mobile operating system called iOS 10. It will be available as free download beginning Sept. 13. Among other things, the software will add more intelligence to Apple services like Maps, Photos, the iPhone keyboard and Siri, the voice-activated digital assistant.

The company also used Wednesday’s showcase to introduce a new generation of its smartwatches, which will include GPS tracking and enough water resistance to swim with, part of its effort to boost sales in its newest product line.

The Apple Watch has been the only major new product released during Cook’s reign, and sales of the device so far have been lukewarm. The company hasn’t disclosed sales figures for the internet-connected watch, but research firm IDC estimates that Apple shipped 1.6 million watches in the April-June quarter, less half the 3.6 million a year earlier.

The original model is getting a price cut, to $270, and will get a faster processor. Series 2 will start at $370. The updates are coming Sept. 16. Existing watches can get new software on Sept. 13.

Anick Jesdanun contributed to this story.