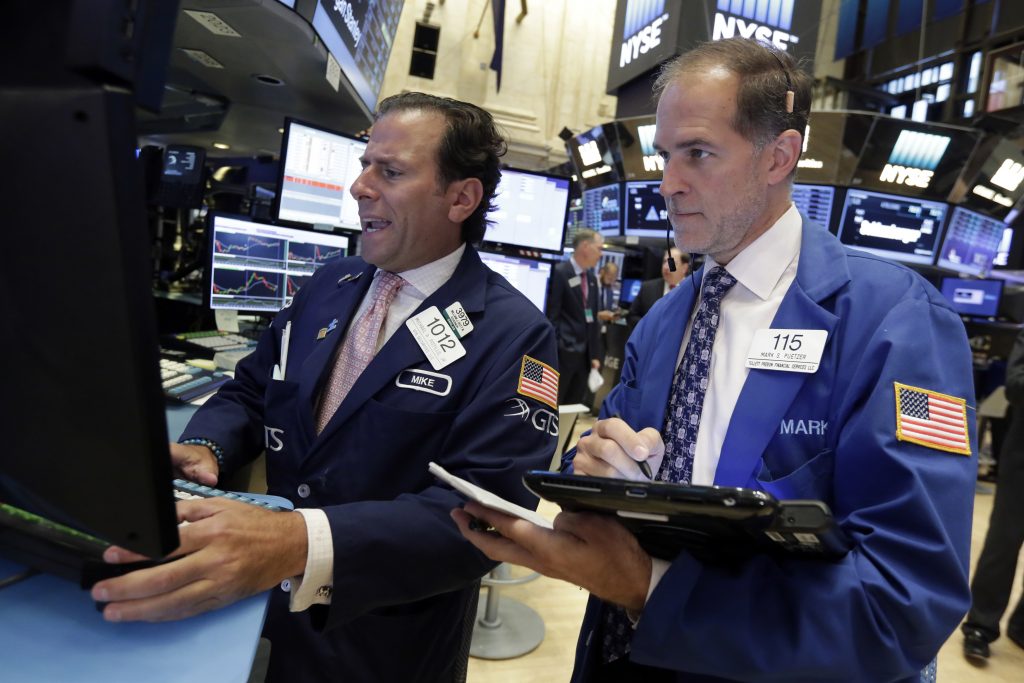 U.S. stocks are inching higher Tuesday as a number of companies announced deals after the Labor Day holiday. Bayer raised its offer for seed company Monsanto to $55.8 billion, while Canada’s Enbridge agreed to buy Spectra Energy for $28 billion. Investors are buying bonds and stocks that pay big dividends after a survey found that services companies grew at their slowest pace in six years in August.

SURVEY SHOCK: The Institute for Supply Management said U.S. service companies grew at a far slower pace in August than they had in July. While service firms have expanded every month for more than six years, the reading on the survey was the weakest since February 2010. New orders and hiring grew at a slower rate and exports fell. Service firms accounted for almost all of U.S. job creation last month.

REACTION: The biggest gains Tuesday went to utility and phone companies, and investors also snapped up government bonds, sending prices higher and yields lower. That echoed a pattern seen in the first six weeks of this year, when the market fell hard and investors bought bonds and bond-like stocks for safety and yield. AES Corp. added 48 cents, or 4 percent, to $12.72 and NextEra Energy rose $2, or 1.6 percent, to $125.13.

The yield on the 10-year Treasury note declined to 1.53 percent from 1.61 percent late Friday.

Banks took the biggest losses. Those stocks tend to suffer when interest rates are low because it makes it harder for banks to make money from lending. Lincoln National lost $1.31, or 2.7 percent, to $46.75 and Citigroup fell 50 cents, or 1.1 percent, to $47.01.

GREEN HARVEST: German health care and chemicals conglomerate Bayer raised its offer for Monsanto to $127.50 a share. The latest offer values Monsanto at around $55.8 billion, or about $1 billion more than Bayer had offered previously. Monsanto has already rejected two bids from Bayer. Its stock edged up 18 cents to $107.62.

ENERGIZED: Spectra Energy climbed $4.84, or 13.4 percent, to $41 after it agreed to be acquired. Enbridge will pay about $40.33 in cash and stock, or $28 billion, in a deal that would make North America’s biggest energy infrastructure company.

DIAGNOSTICS DEAL: Industrial and medical device company Danaher will buy molecular diagnostics company Cepheid for $53 per share, or about $4 billion. Cepheid will become part of Danaher’s diagnostics business, and its stock climbed $17.85, or 51.8 percent, to $52.27 while Danaher dipped $1.47, or 1.8 percent, to $79.72.

HIT THE GAS: Bus, truck and engine maker Navistar surged after it announced an investment from a unit of Volkswagen. The companies are also creating a joint venture that will help source parts for each of them, and they will share technology. Volkswagen Truck & Bus will pay $256 million for a 16.6 percent stake in Navistar. It will also name two directors to Navistar’s board, and the company said Tuesday that chairman James Keyes will retire.