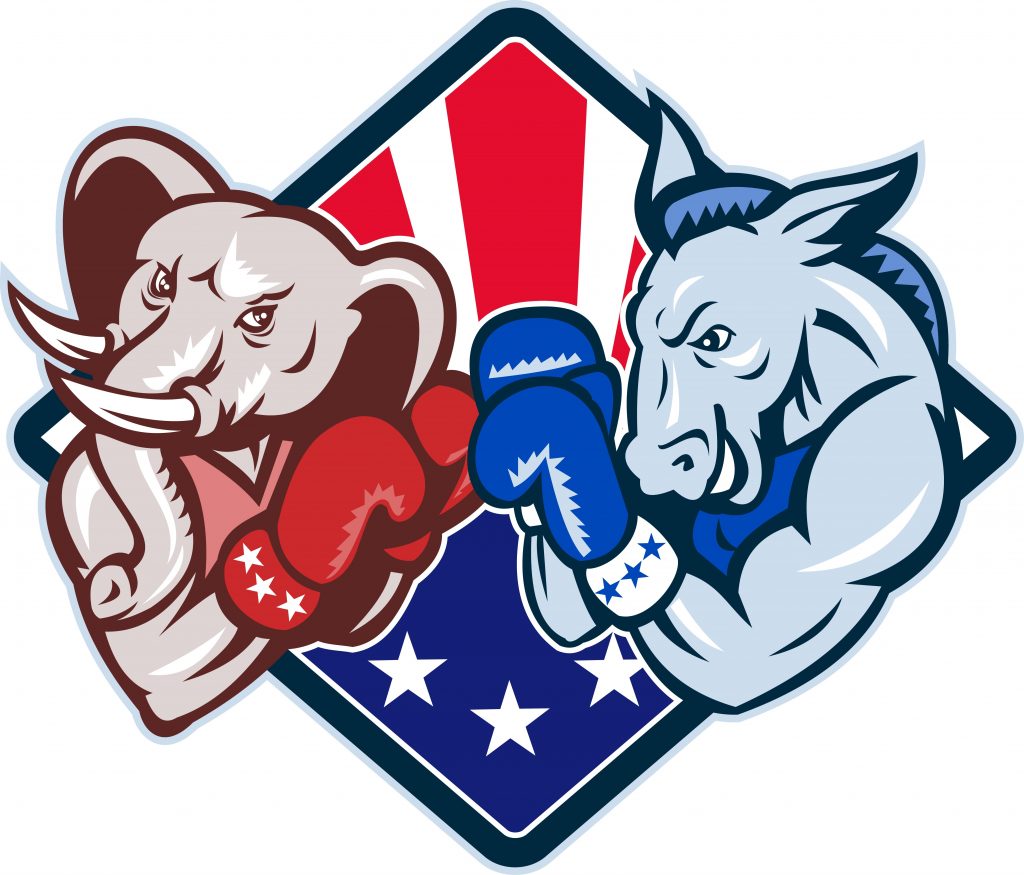 With Labor Day behind them, Donald Trump and Hillary Clinton are battling over national security in the South’s top presidential battlegrounds.

“We believe that such a change can only be made by someone who has not been deeply involved with, and substantially responsible for, the hollowing out of our military and the burgeoning threats facing our country around the world,” the military leaders wrote. “For this reason, we support Donald Trump’s candidacy to be our next commander-in-chief.”

Specifically, the ad shows military veterans watching some of the New York billionaire’s more provocative statements, including his claim to know more about the Islamic State group than military generals, and his criticism of Arizona Sen. John McCain, a former prisoner of war. It also features Trump’s claim that he sacrificed a lot compared to families who have lost loved ones in conflict.

“Our veterans deserve better,” reads a line at the end of the ad, which is airing in Ohio, Florida, Iowa, Nevada and Pennsylvania.

The conflicting messages come as the candidates prepare to court voters in Southern states with significant veteran populations. The pair is also set to appear Wednesday night at an MSNBC forum on national security.

Trump is scheduled to campaign in Virginia and North Carolina on Tuesday, two critical states in his path to the presidency. Trump’s afternoon event in Virginia Beach will focus on national security, and he’s expected to meet with parents of soldiers later in the day.

Clinton and her running mate, Tim Kaine, were making a pronounced pitch on national security and defense policy on Tuesday, fanning out to military-rich communities of Tampa, Florida, and Wilmington, North Carolina. At every stop, Clinton argues that Trump is temperamentally unfit to serve as commander-in-chief, warning that his bluster would damage the nation’s longstanding alliances.

A Clinton victory in Florida would make it virtually impossible for Trump to overcome her advantage in the race for 270 electoral votes.

Clinton has gotten help from the Republicans in questioning Trump’s capacity to serve as commander-in-chief. Dozens of GOP national security leaders released a letter last month warning that Trump would risk the nation’s “national security and well-being.”

Trump, meanwhile, continued to face questions about his immigration policy a day after refusing to rule out a pathway to legal status for immigrants in the country illegally. He focused on his proposed border wall plan in a Tuesday interview on ABC.

The Republican White House contender said the Mexican president violated some “ground rules” by admitting that the two did actually discuss payment of his proposed border wall between the two countries, but added, “That’s OK.”

At the joint press conference with President Enrique Pena Nieto last week, Trump told reporters that payment of his proposed border wall was not discussed. Pena Nieto later tweeted that it was addressed and he “made it clear” to Trump that Mexico would not pay.

He added that had Clinton gone to Mexico, the trip would have been “a total failure.”

The day before, Trump attacked Clinton’s energy level, noting she hasn’t followed his aggressive traveling schedule and questioning whether she had the stamina to lead the nation.

Clinton held a rare news conference aboard her new campaign plane on Monday as both candidates competed for votes in swing state Ohio.

The former secretary of state said she is concerned about “credible reports about Russian government interference in our elections.”

“We are going to have to take those threats and attacks seriously,” Clinton told reporters.

Clinton’s comments follow reports that the Russian government may have been involved in the hacking of Democratic National Committee emails just days before the party’s national convention. The emails, later revealed by WikiLeaks, showed some DNC officials favoring Clinton over her primary opponent, Bernie Sanders — who has since endorsed Clinton for president.

She said Russian President Vladimir Putin appears “quite satisfied with himself” and said Trump “has generally parroted what is a Putin-Kremlin line.”

Clinton’s 25-minute question-and-answer session was her first extensive availability with reporters since early December. Beyond Russia, she answered questions about the ongoing controversy surrounding her use of a private email server while secretary of state, which Trump has used to cast doubt over her ability to protect classified information.

The former secretary of state flatly said “No,” when asked in an ABC News interview whether she’d be willing to accept the Mexican president’s invitation to visit the country, as Trump did last week.

“I’m going to continue to focus on what we’re doing to create jobs here at home,” Clinton said.