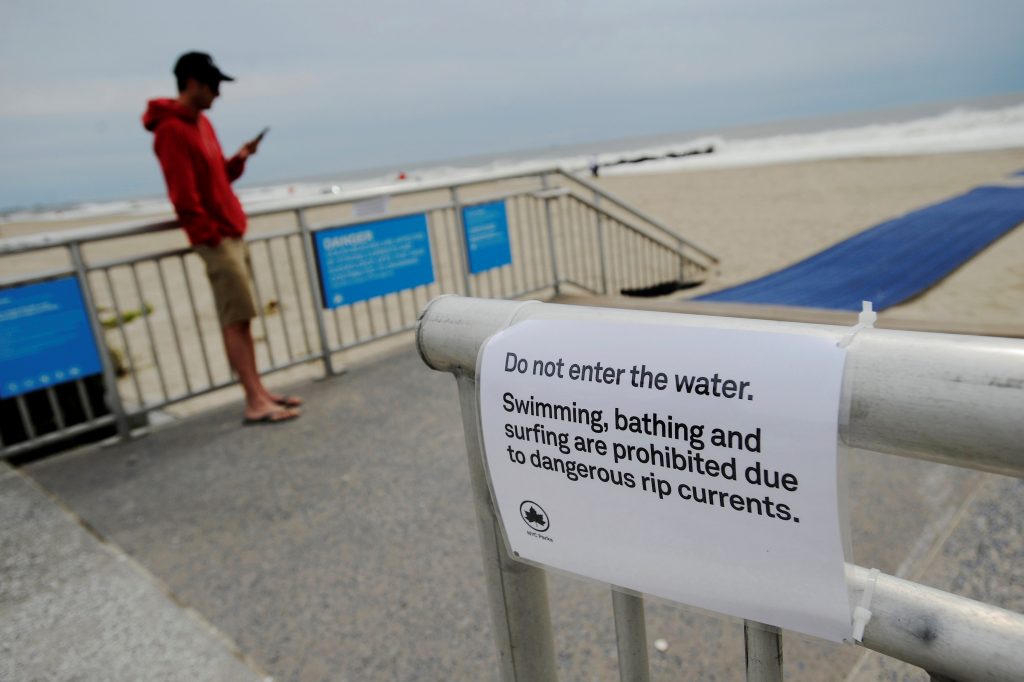 Hermine, a storm that raked Florida with hurricane-force winds last week, lingered on Tuesday off the East Coast where it was expected to produce heavy gusts and rain over the next two days.

Forecasters warned swimmers and boaters to stay out of treacherous waters and rough surf. New York City said all public beaches would be closed through Tuesday because of “life-threatening” rip currents.

At 2 a.m. EDT on Tuesday, Hermine’s center was about 110 miles southeast of the eastern tip of Long Island and expected to move northwest at about 9 mph.

Hermine was forecast to bring up to 2 inches of rain to Rhode Island and southern Massachusetts through Wednesday, the National Weather Service said.

A tropical-storm warning remained in effect from the eastern end of New York’s Long Island to Martha’s Vineyard and Nantucket Island off Massachusetts.

On Cape Cod and its islands, high surf and wind put a crimp in the Labor Day plans of many people looking to celebrate summer’s end, but some beaches farther south reopened.

Hermine was classified as a Category 1 hurricane when it slammed into Florida’s Gulf Coast on Friday. It became a post-tropical storm by week’s end after its winds dropped below 74 miles per hour and it lost its tropical characteristics.

The storm, which crossed northern Florida and then moved up the Georgia and the Carolina coasts, was packing sustained surface winds of up to 65 mph with higher gusts, the National Weather Service said.

The storm has claimed at least three lives, in Florida and in North and South Carolina. The third reported death was that of a man struck by a car on a South Carolina highway on Friday as he tried to move a fallen tree, a Colleton County fire department spokesman said.

Hermine became the first hurricane to make landfall in Florida in 11 years, packing winds of 80 mph, and knocking out power to 300,000 homes and businesses.