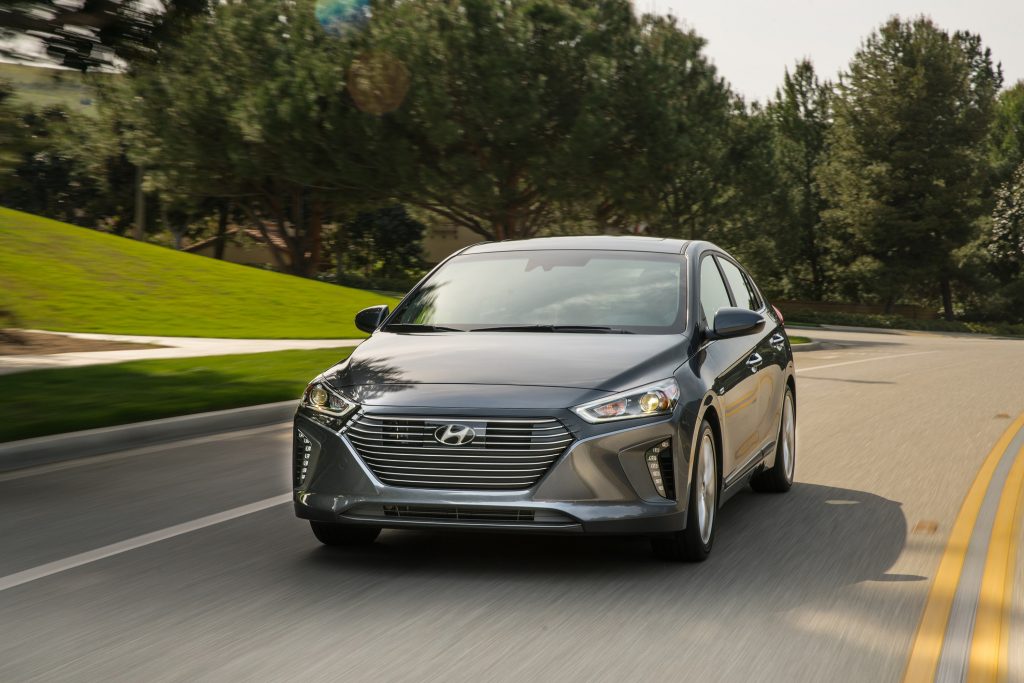 In 1998, the company sold a mere 90,000 cheap and tinny cars to U.S. customers. But that same year, it bought Kia Motors out of bankruptcy. And last year, the two combined sold 809,426 vehicles in the U.S. — not far behind Nissan and Honda — by making cars with the looks and quality to compete with the best Japan had to offer.

Now, Hyundai seeks to take a lead in what it calls eco-vehicles: hybrid, plug-in electric and hydrogen fuel-cell vehicles.

California will serve as a bellwether for success when Hyundai’s Ioniq hits dealerships this year, going against Toyota’s Prius.

“California is the most important state in the U.S. as far as eco-vehicles go,” said Byung Ki Ahn, the director of the eco-vehicle performance development group at Hyundai. “The real battlefield will be in California.”

During a recent interview at the company’s R&D center southeast of Seoul, Ahn credited federal and state incentives for eco-cars and a large population receptive to all things green.

But he sees the state as a sophisticated auto market that won’t respond to incentives alone. If an eco-vehicle can make it in California, it can make it anywhere, he figures.

“Tesla is based in California,” he said. “They knew exactly what the customer wanted.”

Hyundai is making a short-term play and a long-term play for the kind of fuel-saving, pollution-cutting cars people will buy. In both cases, it’s taking on longtime arch-foe Toyota.

The first version of the all-electric Ioniq will have a 110-mile range; Hyundai plans to increase that to more than 200 by 2018.

Although just about every carmaker sells some sort of hybrid, no one touches the Prius in market share. It’s been around since 1997.

“They’ve been there for 20 years and had a lot of challengers, and no one has been successful,” Ahn conceded.

Hyundai aims to change that. The Ioniq’s shape is similar enough to a Prius to connect the cars in buyers’ minds, but it’s not a copycat design. In fact, its smooth profile sets it apart from the aggressively angular new look that Prius debuted in January.

Hyundai claims the hybrid will get slightly better fuel economy than the Prius, but only by a mile per gallon: 56 mpg for the Prius Eco hybrid to 57 or so for the Ioniq. Toyota has announced no plan for a non-hybrid all-electric version, which could give Hyundai an edge.

But competition will be tough.

“They have challenges on a couple fronts,” said Michelle Krebs, senior analyst at Autotrader. First, hybrids still represent only a tiny share of the car market — about 3 percent. “People are not going for hybrids, plug-in hybrids” in large numbers, she said. Plus, “Prius just owns this market.”

One feature Hyundai claims will help it stand out from the Prius: a better drive.

The Ioniq will be equipped with a dual clutch transmission, which uses metal gears, unlike the Prius’ continuously variable transmission, or CVT, which uses belts instead. The dual clutch is split in two, odd gears on one side, even gears on the other, so the next gear is meshed up and ready to go. A computer predicts which gear you need before you need it.

A dual clutch is more powerful and responsive. Originally installed on high-end sports cars, dual clutches are becoming more popular, especially in Europe, where they’ve been enthusiastically embraced by Volkswagen and Audi, among others.

“Nobody offering a car with the slightest performance intentions would use a CVT,” said Bill Hampton, publisher of AutoBeat Daily in Detroit. “They’re not designed for neck-snapping acceleration, and you can’t really grab the gear you want.”

That bodes well for Hyundai in Europe, but what about California and the rest of the U.S.? Hampton noted that Ford tried dual-clutch systems a few years ago and decided U.S. customers weren’t excited. Not enough Americans care enough about sporty driving in lower-priced cars, the thinking went. Others thought that maybe Ford didn’t try hard enough.

Marketing the feature will be tough, Ahn admits. Yet the company spent time and money in research and development to produce a transmission light enough and low-cost enough for a model such as the Ioniq. He thinks customers who try the vehicles will pick up on the difference right away.

That means luring customers to take a test drive, one of the biggest challenges that auto dealers face. In a bid to make it easier, Hyundai and Amazon in August announced a pilot program in which customers can schedule test drives on Amazon’s website and mobile platform. If the program is a success, it could benefit Ioniq. (The companies also are working on letting customers use Amazon’s Alexa voice-command system to start their cars and set the temperature before they leave home.)

Quality shouldn’t be a problem: The latest J.D. Power rankings for new-car quality put Kia on top, Porsche No. 2, and Hyundai No. 3.

Longer term, Hyundai is banking on fuel-cell vehicles, and here too California figures prominently in its plans.

Hybrids and electrics are drawing all the eco-vehicle glory at present. Yet companies such as Hyundai and Toyota see fuel cells as essential in a world where governments, including China’s, are trying, in some measure, to wean their citizens off gasoline engines to combat pollution and global warming. Electric cars have limited range, the thinking goes, so adding fuel cells to the mix would hasten the transition.

The big hit on fuel cells is a near-complete lack of refueling stations to fill up on hydrogen.

The state of California, however, is spending $200 million in grants to get 100 refueling stations built over the next several years. More than a dozen retail stations are now spread through the Los Angeles area, and about 10 in and around San Francisco, with more under construction. A refueling spot between the two cities on Interstate 5 means it’s possible for people who own or lease a fuel-cell car to drive it from one city to the other.

Honda and Toyota have invested in one of the grant recipients, a startup called FirstElement Fuel.

Hyundai offers a fuel-cell-equipped Tucson SUV in California; Toyota has a fuel-cell-only car called the Mirai. The Mirai goes for about $58,000 in California, with up to $5,000 in rebates from the state. The rebates also apply to the Tucson, which is only available on a three-year lease: $3,000 down, $500 a month, with fuel and maintenance covered by Hyundai.

Plug-in electrics and fuel-cell cars often are discussed as an either-or proposition, but to Ahn, “they’re not competitive, they’re complementary.”

While plug-in electric cars can take half an hour or more to charge up, a hydrogen refill takes five minutes. The range is practically the same as a gasoline-powered car — or a long-haul bus or truck, for that matter.

A fuel cell works by stripping electrons off hydrogen atoms and using them to run an electric motor. The only waste material is water vapor, as hydrogen and oxygen are recombined.

Though electricity is needed to separate hydrogen from oxygen to make fuel, Ahn predicts that many of those production plants will draw energy from solar or wind power, making for a near zero-emission vehicle — not just at the tailpipe but at the power source too.

Hyundai is a leader in fuel-cell development, starting in 1999 under the prodding of its chairman, Chung Mong-koo.

“For a long time, it was a very, very expensive lab experiment,” said Frank Ahrens, a former Hyundai public relations executive whose book about his years there, “Seoul Man,” was published in August. “But engineering was able to innovate and get it down to a reasonable price. It’s a nice technology to promote. You put hydrogen in one end and out comes water vapor.”

It’s unclear which technologies will prevail. Spreading around research and production capital among gasoline engines, hybrids, plug-in electrics and fuel cells is risky and expensive, Ahn said. “This is not an easy time for automakers to strategize.”