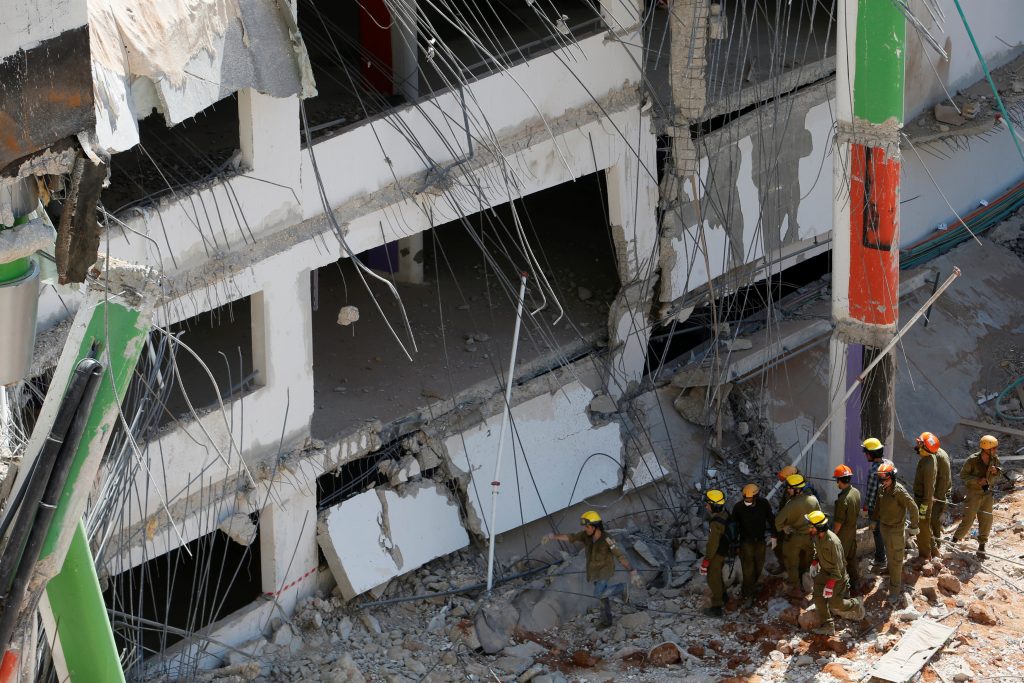 A multilevel underground parking garage collapsed at a Tel Aviv construction site on Monday, killing at least two people, with several others said to still be trapped under the rubble. In all, 23 others were injured due to the collapse. Most were fully conscious and were suffering from superficial wounds. According to Magen David Adom, one seriously injured worker, in his 20s, was rushed to nearby Ichilov Hospital.

The IDF’s Home Front Command sent about 150 members of its special search-and-rescue team to the scene. The unit is often sent to disaster zones around the world to help locate victims from earthquakes, tsunamis and other natural disasters.

Col. Golan Vach, a commander in the unit, said seven people were believed to be trapped in the rubble at several different locations. He described the scene as “very complicated” and said rescue efforts could continue for several days.

A fire brigade spokesman said part of the structure had initially collapsed, causing a crane to fall and bring down more of the partially-completed parking lot. Magen David Adom declared it a “mass-casualty event,” which usually means that at least five people were injured.

A construction worker from the site said he was underground in the garage when he began to feel vibrations.

“All of a sudden everything collapsed,” the man, identified only as Michah, told Channel 10. “It was scary. You feel like everything is going to collapse, and you are going with it.” Speaking to reporters at a Tel Aviv hospital, he said he was blown backward by the blast and lightly injured.

The cause of the collapse was under investigation.

The incident occurred in the Ramat Hachayal neighborhood, a commercial area that is usually quite crowded during working hours.

Among the first rescue workers at the site were members of the Ichud Hatzalah motorcycle rescue patrol.

“As we were treating the first victims an avalanche of rubble came pouring down,” said a volunteer, indicating that there was a danger the rest of the building could collapse. A police spokesperson said on Israel Radio that police were “begging” passersby to stay far away from the site because of the fear that a further collapse of the building was possible.