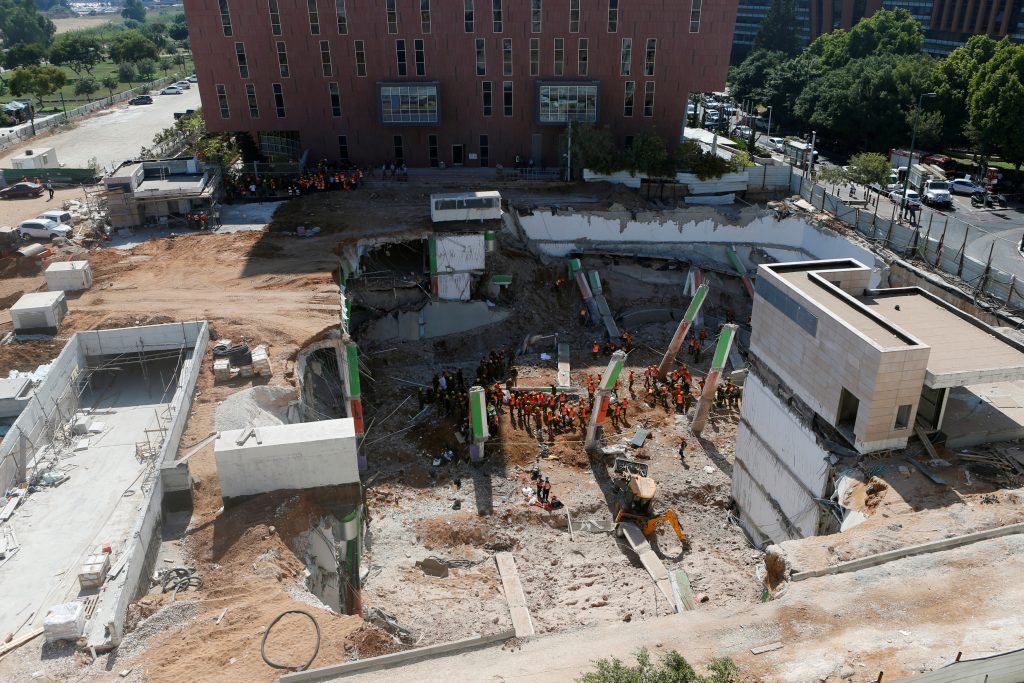 The search for victims of the Tel Aviv building collapse was still ongoing on Monday afternoon when recriminations began pouring in. MKs and officials, still somewhat reticent because the enormity of the tragedy was still unclear, spoke cautiously but forcefully about the lack of supervision at building sites in Israel, and demanded immediate action to correct the situation.

As of Monday afternoon, the total casualty count in the incident in the Ramat Hachayal business district Monday morning was 23, with two victims confirmed dead, and several seriously and moderately injured. Seven people were still missing, and authorities were feverishly trying to find them, fearing that the air pockets they may have found could run out of oxygen soon, if they were indeed still alive.

More than 60 firefighters and dozens of rescue workers were manually tunneling through sand and debris, working cautiously because of the possibility that there could be a further “settling” of what remained of the parking structure that collapsed under the weight of a crane Monday morning. Hundreds of reserve soldiers, along with several bloodhounds, were also on the scene to search for the victims.

Immediately after the collapse, police opened an investigation and began taking statements from workers and witnesses. According to one of the work managers at the site, the parking structure was set to open in about three weeks. However, he told Yediot Aharonot, there had been a water problem at the foundation of the structure. “I told others that I believed the building would fall,” he said. “The tractors would pass through and the building would shake. I told my coworkers what I thought, but I am just a small cog in the machine; the project had a lot of managers and advisers.”

Whether the manager said that to cover himself or as a statement of fact is not clear, as the basement and foundation of the structure was buried under debris and it will probably be weeks before a determination can be made as to the cause of the collapse. But to some Knesset members, the overarching cause of the collapse was clear. Speaking to Israel Radio, MK Ayman Oudeh (United Arab List) said that “our hearts are now with the families of the victims, some of whom do not even know that their loved ones were victims. But the unending accidents at work sites have to stop. This is not a Heavenly edict that cannot be changed but the direct result of negligence of safety regulations and the welfare of workers.”

In addition, he said that the fact that most of the victims were Arabs exacerbated the matter. “We cannot ignore the racist reactions in some quarters that are full of hatred. This is a shocking picture of Israeli society, which is managed by powers that pit one poor and weak group against another.”

MK Amir Peretz (Zionist Camp) said that the tragedy was “especially difficult. Although the details are still unclear, what is clear is that there are many long-standing problems in the construction trade regarding safety issues that the government is not doing anything about.”

MK Dov Hanin (UAL) was more direct, saying that “this tragedy could have been predicted. There is almost no supervision on safety matters at construction sites in Israel.”

The collapsed structure was a project that was being managed by Africa Israel Investments, which had subcontracted the work to the Denya Sibus construction firm. Channel Two reported Monday afternoon that the construction firm has been investigated three times in the past two years for safety violations at construction sites.