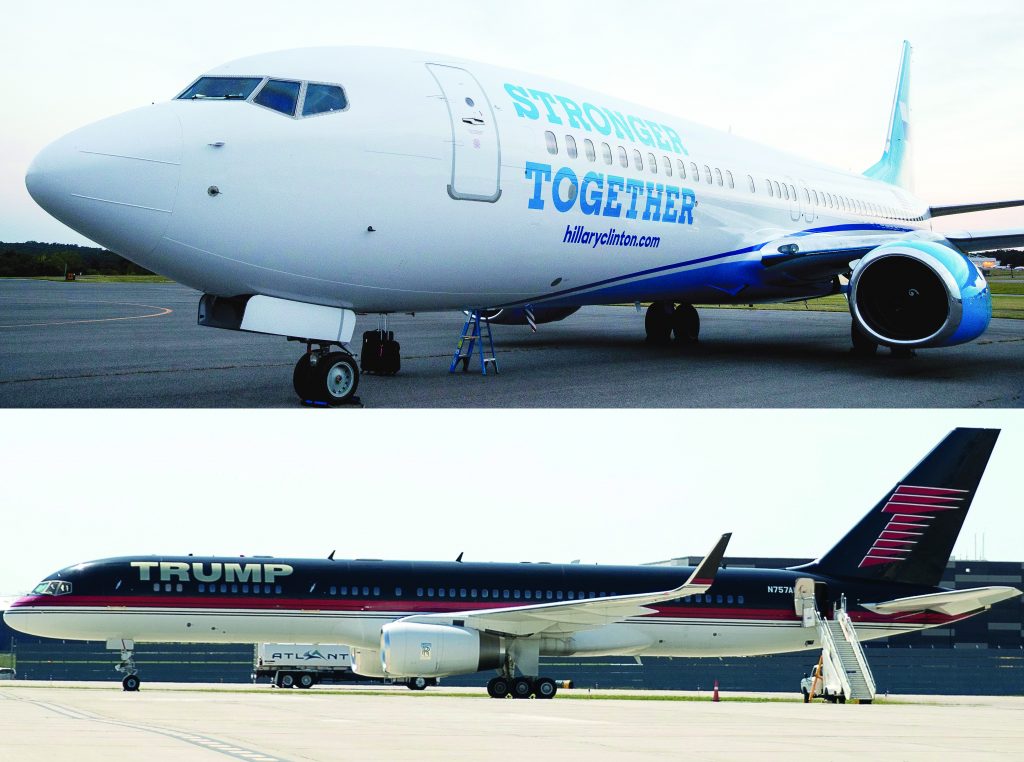 Donald Trump and Hillary Clinton are making competing Labor Day pitches in Ohio, setting the stage for a critical month in their testy presidential campaign.

The Cleveland Airport offered a glimpse of how critical the fight for Ohio has become in the lead-up to the general election, as airplanes for both party nominees and their running mates were parked on the tarmac Monday morning.

Trump and his running mate, Mike Pence, prepared to leave Cleveland as Clinton and Tim Kaine arrived. It was a near-encounter that even forced the Trump press corps to the side of the road as Clinton’s motorcade whizzed by.

“It’s kind of interesting to have all the planes here on the same tarmac,” Kaine said as he walked over to greet Clinton. “Just shows you how important Ohio is. We’re going to be here a lot.”

The pair of Democrats plans to take part in a Labor Day festival with union leaders and workers in Cleveland. Trump and Pence attended a round-table discussion with union members, where Trump warned about the decline of America’s manufacturing jobs.

Trump appeared with Democratic Mayor Tom Coyne, of Brook Park, Ohio, who said he supported Trump in this spring’s Republican primary and would vote for him this fall.

“The mayor today is just one example of what’s happening across this country,” Trump campaign manager Kellyanne Conway said. “Voters who traditionally have not voted Republican or haven’t even voted in a very long time seem to be coming out to support this messenger and this message.”

Trump was also expected to campaign at a fair in Youngstown, Ohio, in a nod to the state’s role as a make-or-break proving ground for Republican presidential candidates. No Republican has won the White House without winning Ohio and Trump is trying to overcome some splintering in the state party, which was supportive of Ohio Gov. John Kasich during the presidential primary.

While Labor Day has traditionally been the kickoff to the fall campaign, both Clinton and Trump have been locked in an intense back-and-forth throughout the summer.

Clinton has questioned Trump’s temperament and preparation to serve as commander in chief while seeking to connect him to the extreme “alt-right” movement within the Republican Party.

Trump visited a predominantly black church in Detroit on Saturday in a rare appearance with minority voters, aiming to counter Clinton’s argument to moderate and suburban voters that he has allowed a racist fringe to influence his candidacy.

The start of full-fledged campaigning opens a pivotal month, culminating in the first presidential debate on Sept. 26 at Hofstra University in Hempstead, New York. Polls show Trump trailing Clinton in a series of must-win battleground states, meaning the debates could be his best chance at reorienting the race.

Clinton will have millions of dollars at her disposal this fall to air broadcast advertising and power a sophisticated get-out-the vote operation in key states.

The former secretary of state raised a combined $143 million in August for her campaign, the Democratic National Committee and state parties — her best month yet. She began September with more than $68 million in her campaign’s bank account to use against Trump, who has not yet released initial fundraising totals for August.

Clinton was expected to attend the Labor Day festival in Cleveland alongside running mate Tim Kaine and AFL-CIO President Richard Trumka. Later in the day, she was joining with labor leaders in the Quad Cities community of Hampton, Illinois, across the Mississippi River from Iowa, where she is locked in a tight contest with Trump.

The destinations in Ohio, Pennsylvania, Michigan and New Hampshire point to Clinton’s battleground map of approximately a dozen states that hold the key to the 270 electoral votes needed to claim the presidency.

Clinton was arriving in Ohio and Illinois aboard a new blue-and-white Boeing 737 campaign plane emblazoned with her slogan, “Stronger Together.” She has mostly traveled by private jet during the primaries and the summer but was being accompanied on the plane by journalists for the first time.

Greeting reporters traveling aboard her campaign plane before takeoff, Clinton said, “Welcome to our big plane! It’s so exciting.”

She said she had a good Labor Day weekend, calling it “the last moment before the mad dash.”

Clinton has been pressured by media critics and Republicans alike to hold a news conference for the first time in 2016. She has not held a formal question-and-answer session with reporters since one in Iowa in early December.

Kathleen Ronayne contributed to this report.