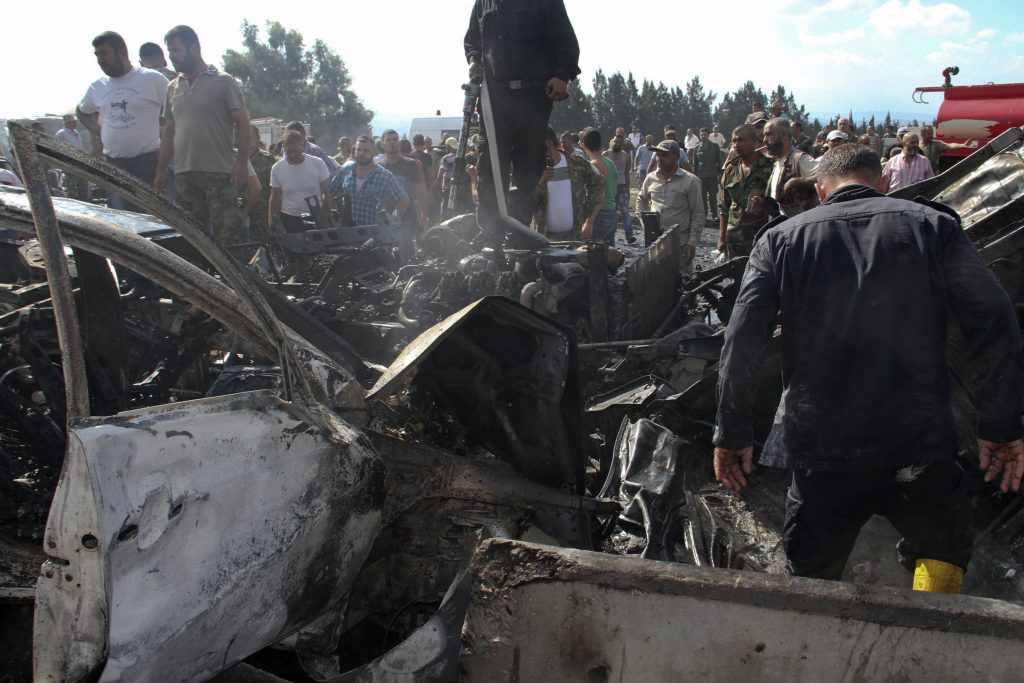 The Islamic State group launched a series of suicide bombings and other attacks across Syria on Monday, killing at least 48 people as it targeted government-held areas and Kurdish forces.

The wave of attacks came as the terrorist group has steadily lost ground in both Syria and Iraq in recent months. This week Turkish troops and Syrian rebels drove IS back from the last stretch of Syria’s northern border under its control, severing key supply lines to the terrorist group’s self-styled caliphate.

The IS-run Aamaq news agency said the group was behind the “simultaneous” attacks in Syria, which included six suicide bombings and a remotely-detonated bomb. The attacks were timed to coincide with the morning rush hour.

Syrian state media said 48 people were killed in blasts around the coastal city of Tartus in the west, the central city of Homs, the suburbs of the capital, Damascus, and the northeastern city of Hasakeh. IS said it also carried out an attack in Qamishli, in Hasakeh province.

The Britain-based Syrian Observatory for Human Rights, which maintains a network of contacts inside Syria, put the overall death toll at 53. Conflicting casualty figures are common in the Syria war.

One of Monday’s attacks took place in the heavily guarded Damascus suburb of Sabbourah, marking a major security breach. SANA said the attack killed one person, while the opposition-run Observatory said three people were killed. IS said a suicide car bomb targeted a military checkpoint in the area west of Damascus.

“It’s an area that houses officers and their families. Even before the revolution it was carefully guarded,” said opposition media activist Yousef al-Boustani, referring to the 2011 uprising against President Bashar Assad, which began with peaceful protests.

A car bomb struck a bridge on the international coastal highway leading to the government stronghold of Tartus. A suicide bomber then struck the crowd that had gathered there, according to SANA, which said 35 people were killed. The bombing caused the brief closure of the Tartus-Homs highway, according to state media.

The Observatory said the target was a security checkpoint at the southern entrance of the coastal city, a government stronghold that is home to a large Russian naval base. It said the twin blasts killed 38 people, including an army colonel, and wounded dozens more.

A survivor at the al-Bassel Hospital told state media the blasts occurred near a checkpoint. “My car caught fire and army soldiers pulled us out of the car,” he said.

Back in May, the Islamic State group claimed twin suicide bombings in Tartus and neighboring Jableh that killed over 160 people.

The governor of Homs province said a car bomb struck a military checkpoint in the provincial capital, killing three soldiers and a civilian, and wounding 10 others. The city of Homs, Syria’s third-largest, is largely under government control, with only one neighborhood still held by rebels. Monday’s bomb exploded in the government-held Bab Tadmor district, SANA said. The Observatory said four soldiers were killed.

Syrian media aired footage showing massive damage to the area, with a number of smashed cars and the bloodied body of a guard at the checkpoint.

In the northeastern city of Hasakeh, a suicide bomber on a motorcycle killed eight people, SANA said. The IS news agency said the attack was carried out by a suicide bomber targeting a checkpoint manned by Kurdish forces.

Government forces withdrew from Hasakeh in August after street battles with Kurdish forces, which took control of the city, though the state’s police force remained in place. The Observatory said the blast killed five members of the Kurdish police force, the Asayesh, and three civilians.