World U.S., Russia Close on Syria Deal, But Obama Says Not There Yet
World 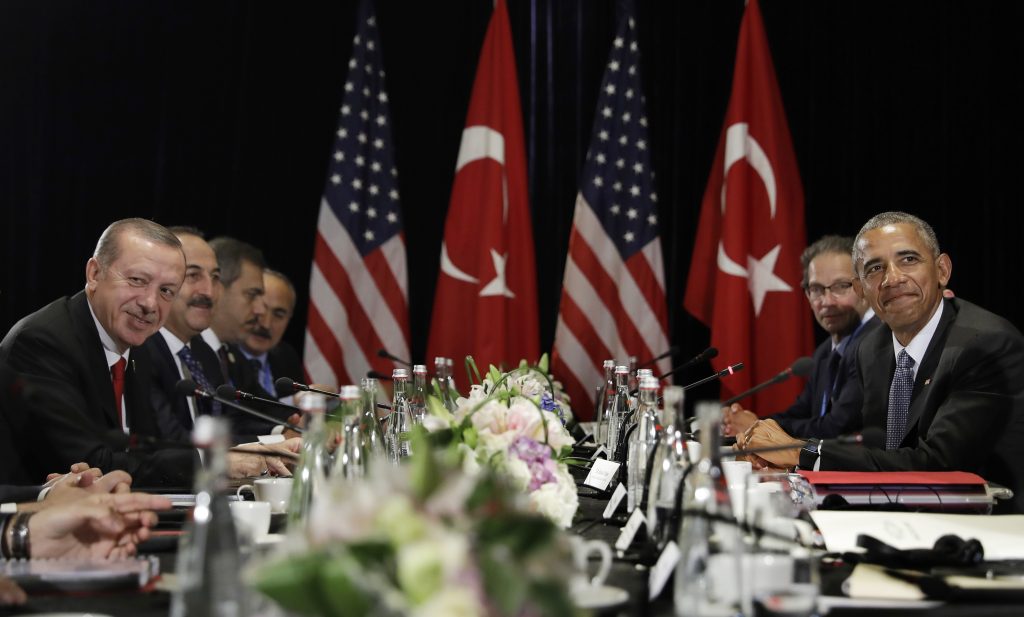 The United States is skeptical an agreement with Russia to decrease violence in Syria can work but will keep pursuing it nonetheless, President Barack Obama said Sunday as negotiators from both countries edged toward a deal.

Obama, speaking on the sidelines of the Group of 20 economic summit in China, said the U.S. and Russia still have “grave differences” about what’s needed to end Syria’s civil war and which opposition groups are legitimate targets for the U.S. and Russian militaries. But he said “it is worth trying” to secure an agreement nonetheless, adding that negotiators were working “around the clock.”

“We’re not there yet,” Obama said. “I think it’s premature for us to say there’s a clear path forward, but there’s the possibility at least for us to make some progress.”

A deal could be announced as early as Sunday by U.S. Secretary of State John Kerry and Russian Foreign Minister Sergei Lavrov, said a senior U.S. State Department official, adding that the two countries were close to a deal but still had to resolve some issues. The official wasn’t authorized to discuss the negotiations publicly and requested anonymity.

Kerry and Lavrov have been deep in talks for weeks over a deal to boost U.S. and Russian military cooperation to fight the Islamic State terror group and other terrorists in Syria — a step Moscow has long sought. The emerging deal is expected to also include provisions to ensure aid can reach besieged areas of Syria and steps to prevent Syrian President Bashar Assad’s government from bombing areas where U.S.-backed rebels are operating.

U.S. officials have said that as part of a deal, Russia would have to halt offensives by Assad’s government, something it has failed to do over months of diplomatic efforts. They said the U.S. must get rebels to break ranks with the al-Qaida-linked Nusra Front, a task that grew tougher after Nusra terrorists last month successfully broke the siege of Aleppo, Syria’s largest city and the site of fierce recent fighting.

Though negotiators have been hopeful a deal could come together while world leaders are gathered in Hangzhou for the G-20, that optimism has been tempered by the failure of previous cease-fire deals to hold. The U.S. has long been wary of increasing military coordination with Russia in Syria’s civil war because it says Russia continues striking moderate, U.S.-backed opposition groups in a bid to prop up Assad. The U.S. wants Russia to focus exclusively on IS and al-Qaida-linked terror groups.

Discussions about the intractable Syria conflict and the related fight against IS have been a major focus as world leaders gather for the G-20, which brings together the world’s major economies. Obama met first Sunday with new British Prime Minister Theresa May, then with Turkish President Recep Tayyip Erdogan for their first sit-down since the failed coup in his country in July.

Obama called the attempted overthrow “terrible.” He assured Erdogan that his national security team and the Justice Department would ensure that those responsible are brought to justice, a reference to Turkey’s extradition request for an exiled cleric it holds responsible. The U.S. is still weighing Turkey’s evidence for the Pennsylvania-based cleric Fethullah Gulen.

Turkey’s demands for the U.S. to hand over Gulen have coincided with growing clashes between Turkish forces and U.S.-backed Syrian Kurds. The Pentagon has backed the incursions, but said they should only be aimed at IS fighters. Turkey has used the operations to push back Syrian Kurds it accuses of seeking to claim more territory.

Obama called Turkey a key ally in the campaign to defeat the Islamic State and said “we now need to finish the job” of securing Turkey’s border with Syria.

Since the failed coup, the U.S. has been alarmed by Turkey’s diplomatic flirtations with Russia and Syrian President Bashar Assad’s patron, and the softening of its demand that Assad be excluded from a political transition.

Erdogan said it was important for the U.S. and Turkey to “embrace a common attitude against terrorism.” In a reference to Washington’s support for the Kurds, he said there are “no good terrorists or bad; all terrorism is bad.”

In his first meeting with May since she took office in Britain, Obama sought to demonstrate American solidarity with the U.K. amid the tumult over its decision to leave the European Union. He and May said their countries would continue an ambitious trade agenda together, though Obama conceded that Britain’s first task was to figure out its new trade relationship with its EU neighbors.