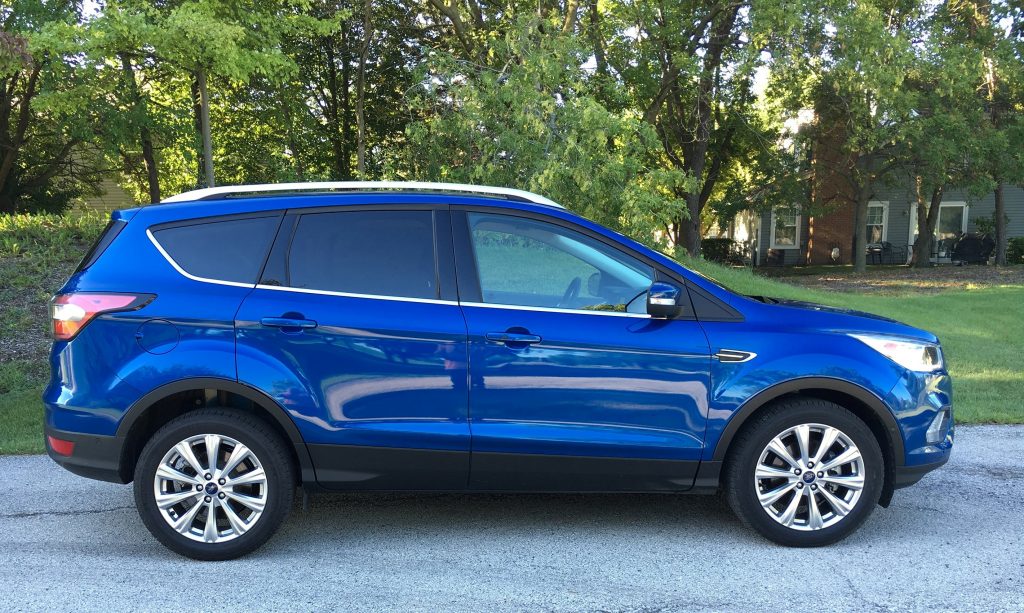 Escape is Ford’s second-best seller, behind the U.S. sales king known as the F-150. It trails the Honda CR-V and Toyota RAV4 among crossovers, America’s largest segment.

On the outside, the athletic-looking Escape shares the same trapezoidal grille as the redesigned 2015 Ford Edge crossover; the headlights are a bit sharper, the side vents more rectangular, and it’s slightly wider.

On the inside the tall ride height and forward visibility — two of the most important things driving buyers to crossovers — are exceptional.

Our loaded test model in top-of-the-line Titanium trim came with the smallest of three available four-cylinder engines. The 1.5-liter EcoBoost engine is inexplicably less fuel-efficient than its 1.6-liter predecessor, despite automatic start-stop technology, which shuts off the engine at stops of more than three seconds. It gets the same 23 mpg around town, but drops from 32 mpg on the highway to 30 mpg.

There is little advantage to the 1.5-liter as far as we can tell. For an additional $1,295 the 2-liter EcoBoost four-cylinder provides the most torque in this class, according to Car and Driver, while sacrificing only 1 mpg across the board.

Improved fuel economy is conceivably why a buyer would opt for the smallest engine instead of the punchier 2-liter turbo four or the base 2.5-liter. It gets a respectable 26 mpg combined on paper, but we averaged 24 mpg in mixed driving. Turbocharged engines work against fuel efficiency for lead-footers more so than naturally aspirated engines, but we weren’t aware of being overly heavy on the throttle. Perhaps we needed a feather touch.

Ford said the downgrade was due to changes in EPA testing, but we have been unable to corroborate the nature of those changes. Our speculation is that Ford had to revise it as part of its internal fuel economy audit in 2014 that resulted in downgraded mpg figures for its hybrid and subcompact vehicles.

The Mazda CX-5, Honda CR-V and Toyota RAV-4 hybrid all do better.

Handling and steering is spry enough to feel more like a hatchback than a minivan.

On the inside the cabin is snug but the storage space is smart, with clever pockets and depressions to stow everything from a purse in the door to two phones under the center stack. The clunky parking brake has been replaced with an electronic button, the gear shifter has been moved closer to the driver for better access to the climate control buttons, a perfect and obvious blend of buttons and dials.

All the newfangled driver assist systems, from adaptive cruise control to lane keeping assist, work really well without being obnoxious in their warnings or unclear in their intent. Drivers will know within a few rides what that the car is doing and why.

The biggest technological change happened for the 2016 model, when the much anticipated Sync3 infotainment system replaced the much ballyhooed Sync predecessor.

The eight-inch touchscreen is still a reach for drivers who don’t like to steer with their teeth, and it’s in a deep recess clad on all sides by the hard black molding and softer black dash material of the Titanium trim. It’s hooded with a black lid that also has one of those CD player things, and is flanked by vents and underscored by the odd tuner pad and volume dial.

The home screen button has moved to the top left corner of the screen, and when pressed will turn up a display that splits the screen into half for the map on one side and audio and vehicle info on the other. The display is bright, large, easy to read, and the split quadrants that maligned Sync are no more. Inexplicably, the menu buttons remain on the bottom. If you have nails or short stubby fingers, you’ll have to use a thumb.

While there are redundant steering controls for audio functions, Ford misses an opportunity with the vehicle information display in the center of the instrument cluster. It shows trip odometers and vehicle health, as expected, but most automakers are doubling down on the redundant steering controls and info display so you don’t even have to use the touch screen. Hyundai, Kia, GM, and FCA have more layered systems that take longer to get used to, but let you keep your hands on the wheel. These infotainment systems are superior to Sync3, as is Mazda’s control knob in the center console.

The advantage to Sync3 is the excellent voice commands. You can zoom in and out on the map using voice controls, as well as send and hear text messages via Siri for Apple CarPlay. A quiet cabin provides plenty of fidelity and connectivity without ever needing to reach for the phone.

Overall Sync3 is an improvement but still a disappointment.

2017 Ford Escape Titanium at a glance