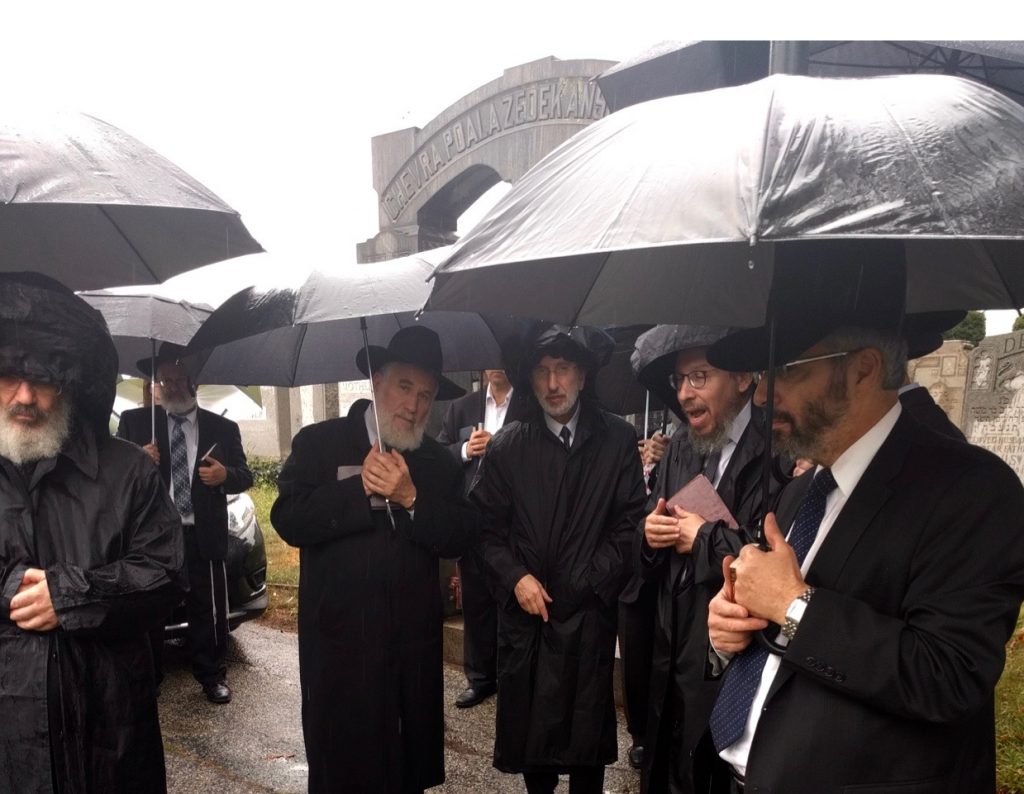 In what has become an annual event, the talmidim of Hagaon Harav Avraham Yaakov Hakohen Pam, zt”l, long-time revered Rosh Yeshivah of Mesivta Torah Vodaath, member of Moetzes Gedolei HaTorah of Agudath Israel of America and founder of the SHUVU organization, gathered to recite Tehillim at his kever in Mount Judah Cemetery in Queens on the occasion of his 15th yahrzeit, Thursday, 28 Menachem Av.

Despite the inclement weather, many talmidim came to honor the memory of their great Rebbi, who had such an indelible impact on their lives and whose career of harbatzas Torah to thousands spanned more than six decades of devotion to Torah chinuch on the American scene.

After the recitation of Tehillim, the assemblage was addressed by Harav Yosef Eisen, shlita, mora d’asrah of K’hal Bnai Yeshivos of Flatbush. Rav Eisen, a very close talmid of Rav Pam, exhorted the gathering to emulate the persona of their great mentor. In particular, he pointed out that in our fast-paced world, the “art of listening” has been lost with the trend of emailing and texting that has become the new method of communication. He reminded the assembled how Rav Pam always made time – despite his tremendously busy schedule at the yeshivah, and other tzorchei tzibbur he was so deeply involved in – to listen to the myriads of individuals who came to his door, and to his shtender in yeshivah – to seek his sage advice, clear guidance, comforting words and soft shoulder upon which to unburden themselves. He did so with patience and compassion, attentive to every word that was being spoken as if there was no one else and nothing else in the world other than the person speaking to him at that moment. Rav Eisen challenged the talmidim to follow in their illustrious Rebbi’s footsteps and to “stop, look and listen” to their friends, family, neighbors, acquaintances when they reach out to them as well.

“Find the time, be a listener,” said Rav Eisen. “There can be no greater chesed.”

The gathering concluded with the recitation of a stirring kel moleh, and a fervent mishebairach for cholei Yisrael for whom the talmidim beseeched that in the zechus of Rav Pam, will be zocheh to refuos and yeshuos.

The event was coordinated by the Yeshiva Torah Vodaath Alumni Association through the initiative of Reb Yisroel Blumenfrucht, a close talmid of Rav Pam, zt”l.