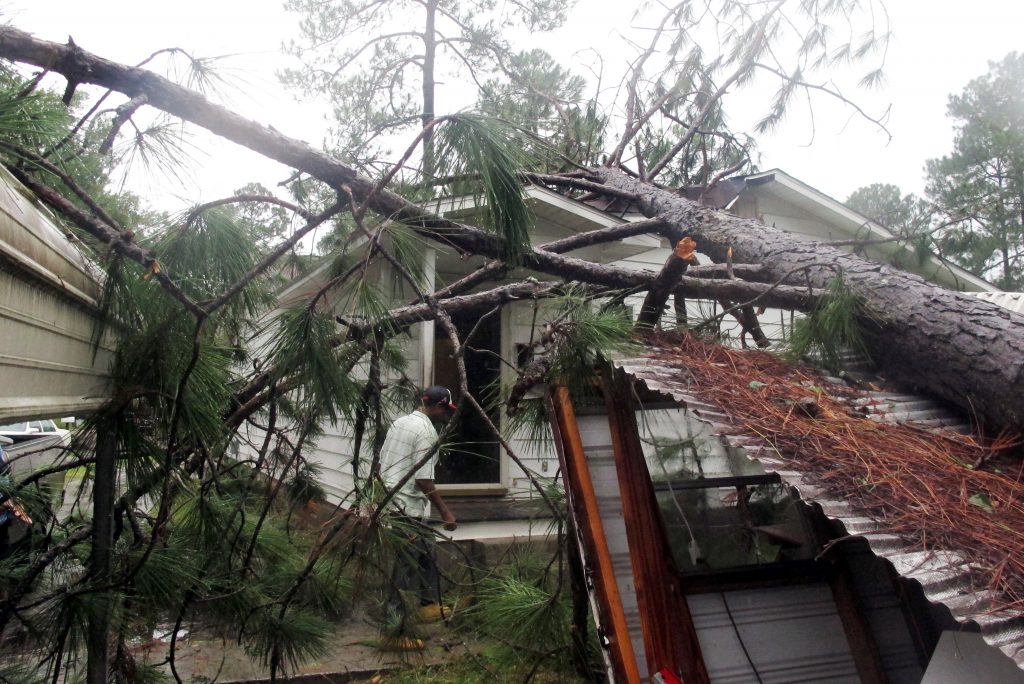 Hermine tore across northern Florida on Friday as the first hurricane to hit the state in more than a decade, killing one person, raising a storm surge that destroyed beachside buildings and toppling trees into homes.

As the system pushed into Georgia, it knocked down many power lines in both states. Hundreds of thousands of people were without electricity.

Hermine was expected to move into the Carolinas and roll up the East Coast with the potential for drenching rain and devastating flooding through the Labor Day weekend. As of 11 a.m. EDT Friday, it had weakened from its peak wind speed of 80 mph to a tropical storm.

A homeless man in Marion County, south of Gainesville, was killed when he was hit by a tree, Florida Gov. Rick Scott said at a news conference.

Although damage was still being assessed, the governor said he knew of no other “major issues” besides the power outages and damaged roads. It was unclear whether he had received word of damage to remote and sparsely populated areas.

At Dekle Beach, just south of the state’s Big Bend, where the peninsula meets the Panhandle, storm surge damaged numerous homes and destroyed storage buildings and a 100-yard fishing pier. The area is about 60 miles southeast of St. Marks, where Hermine made landfall at 1:30 a.m.

Nancy Geohagen walked around collecting photos and other items for her neighbors that had been thrown from storage.

“I know who this baseball bat belongs to,” she said plucking it from a pile of debris.

An unnamed spring storm that hit the beach in 1993 killed 10 people who refused to evacuate. This time, only three residents stayed behind. All escaped injury.

At nearby Keaton Beach, about two dozen people waited on a road just after sunrise Friday, trying to get to their homes. Police blocked the road because of flooding.

Dustin Beach, 31, had rushed there from a hospital in Tallahassee where his wife had given birth Thursday night to a girl to see if his home still stood.

“When my wife got up this morning, she said, ‘Go home and check on the house. I need to know where we’re going after we leave the hospital,’ ” Beach said.

Cindy Simpson was waiting near her car, hoping her beach home and boats had made it. “It’s a home on stilts so I put everything upstairs. We have two boats in the boat house, and I hope they’re still there,” she said.

Fire-rescue spokesman Mike Bellamy said an unknown number of people were taken to hospitals with injuries that were not thought to be life-threatening. His agency responded to more than 300 calls overnight. Mayor Andrew Gillum estimated that as many as 100,000 residents were without electricity Friday morning.

The governor estimated that 325,000 people statewide had no power.

It was sometime after midnight when Alan Autry, 48, started hearing the large pines that line his Tallahassee neighborhood start to crack and fall to the ground.

Then he heard one come down on the top floor of his house. The tree didn’t initially crash through the roof, and Autry and his wife went to a neighbor’s house. Sometime before dawn, the corner of his house collapsed from the weight of the tree.

Autry said the two were “blessed” that no one was hurt. They were downstairs when the tree fell over.

“We’ve been married 13 years and this is our fifth hurricane,” said Autry who moved from central Florida six years ago. “By far, this is the worst damage we’ve ever had.”

At 11 a.m., Hermine had maximum sustained winds of 50 mph, the Hurricane Center said. It was centered about 130 miles west-southwest of Charleston, South Carolina, and was moving north-northeast at 18 mph.

As Hermine surged into southern Georgia, 84-year-old Melvin Gatlin Sr. awoke before dawn to the sound of a thundering crack that shook his whole house.

The storm’s winds had uprooted a pine tree in Gatlin’s backyard and sent it crashing onto his home of more than 40 years. The trunk crushed a storage shed where Gatlin kept his deep freezer, lawn mower and other tools and appliances. It also made a tear in the roof.

“I thought somebody had shot me, the way it sounded,” Gatlin said a few hours later in his living room, where a cooking pot on the floor caught water dripping from the ceiling in a long, thin line.

By late Friday morning, more than 107,000 customers were left without power across Georgia, utility companies reported.

The last hurricane to strike Florida was Wilma, a powerful Category 3 storm that arrived on Oct. 24, 2005. It swept across the Everglades and struck heavily populated south Florida, causing five deaths in the state and an estimated $23 billion in damage.

Scott declared an emergency in 51 counties. He said 6,000 National Guardsmen were poised to mobilize for the storm’s aftermath. The governors of Georgia and North Carolina also declared states of emergency.

In Florida, concerns over the standing water in which mosquitoes breed intensified as the state battles an outbreak of the Zika virus.

“It is incredibly important that everyone does their part to combat the Zika virus by dumping standing water, no matter how small,” Scott said at the news conference.