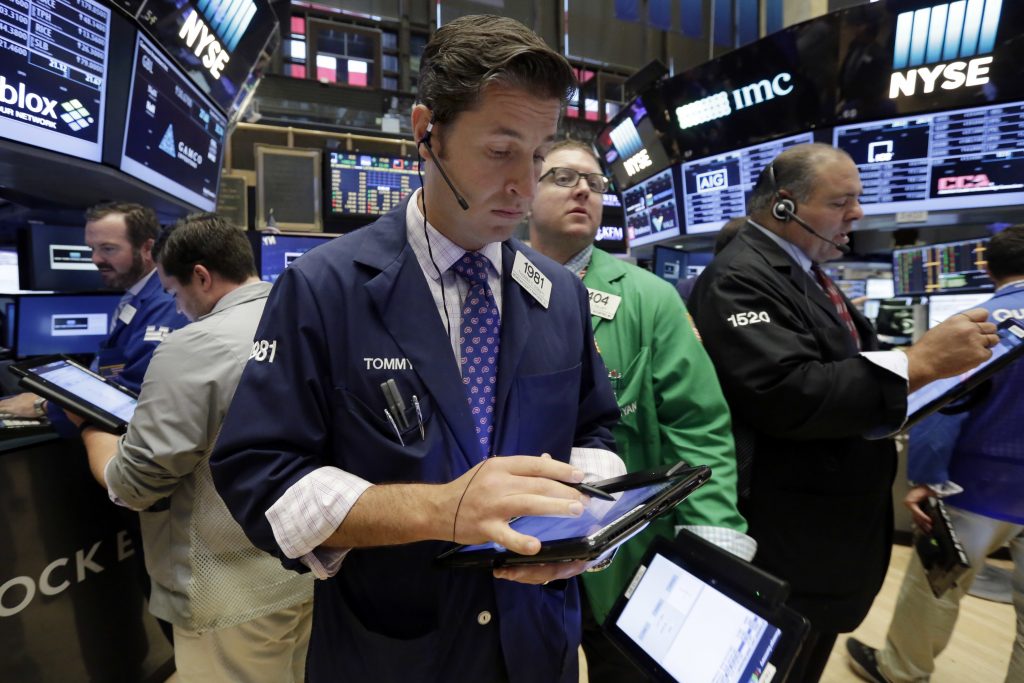 Stocks are hardly budging Thursday afternoon after declines earlier in the day. Banks are down and energy companies continue to fall with the price of oil, but metals companies and technology stocks are rising. Weak reports from Costco and Campbell Soup are hurting household goods companies.

The Dow fell as much as 105 points in morning trading but has recovered almost all of those losses. Stocks didn’t move much in August, and the S&P 500 had one of its quietest months ever.

MMM MMM MEH: Campbell Soup fell after disappointing results from the company’s fresh products unit. The company said carrot sales fell because of a premature harvest that resulted in smaller vegetables, while a recall hurt sales of its Bolthouse Farms beverages. The maker of canned soups, Pepperidge Farm cookies and V8 juices has been trying to capitalize on a growing desire for fresh foods. Its stock slid $3.34, or 5.5 percent, to $57.38.

COSTCO CLIPPED: Costco stock fell after the company reported weak sales for the month of August. The wholesale club operator said sales at older stores were unchanged compared to last year, while analysts expected some growth. The stock gave up $5.09, or 3.1 percent, to $157.

IN THE ROUGH: Diamond Offshore Drilling sank after the company said Brazilian oil company Petrobras is terminating a contract with the company. Diamond said the contract was scheduled to end in October 2018, and that it does not believe Petrobras’ actions are legal. Its shares lost $1.67, or 9.1 percent, to $16.80.

MANUFACTURING: U.S. manufacturing shrank in August for the first time since February as orders and output fell and factories cut jobs. In Japan spending on factories and equipment was weaker than expected in the second quarter, partly due to the strong yen.

However there were signs that the weak global economy won’t hurt U.S. manufacturers as much. Chinese factory managers said they expect to do more business and anticipate growth in production and orders and European manufacturers reported continued growth in August. In Britain, manufacturing recovered to a 10-month high after contracting last month.

FLAGGING FORCE: Customer management software developer Salesforce.com reported a greater profit and better sales than expected, but the stock slipped as investors weren’t impressed with the company’s third-quarter guidance. Its shares fell $4.61, or 5.8 percent, to $74.81.

GETTING A BARGAIN: Discount retailer Ollie’s Bargain Outlet Holdings raised its forecasts for the year following a strong second-quarter report. Its stock climbed $2.56, or 10.1 percent, to $27.98.

INDEXED: Cable company Charter Communications, which recently bought Time Warner Cable and Bright House Networks, rose after S&P Dow Jones said the company will be added to the Standard & Poor’s 500 index next week. Companies that are added to major indexes often trade higher as investors and funds add them to their portfolios. Charter stock $12.66, or 4.9 percent, to $269.87.

DRUGMAKER DEAL: Cynapsus Therapeutics, which is developing a potential treatment for symptoms of Parkinson’s disease, agreed to be acquired by Sunovion Pharmaceuticals. The deal values Cynpasus at $40.50 per share, or $503 million. Its stock jumped $21.31, or 116 percent, to $39.67.