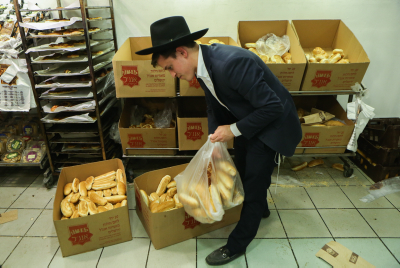 In the wake of a recent price-fixing scandal among bread manufacturers, the government organized a committee to study the bread market. The committee wrote a report that recommends cutting the price of bread by 25 percent – but no one has paid attention yet, Channel Two reported.

The government-appointed committee examined the cost and production process of several types of bread, including standard “dark” and “light” breads that are subsidized. At least some of the sliced breads were priced by at least a quarter more than was necessary, taking into account the cost of production and a healthy profit margin.

Last January, the current and former heads of two of Israel’s largest bakeries were sentenced to one year in prison for their role in a price-fixing scandal. The two had previously been found guilty of colluding to set prices on products between themselves, dividing Yerushalayim and other cities into “protected” areas where only one brand of bread would be sold, and hiking prices on a regular, predetermined basis.

The two were sentenced to a year in prison. In addition to the sentences, the plot’s masterminds were personally fined NIS 200,000 and NIS 300,000 respectively. The bakeries themselves also were fined – to the tune of NIS 1.4 million for one and NIS 700,000 for the other.

The two companies together control about 90 percent of the bread market in Yerushalayim, and in 2010 decided to get together to set prices. The cartel operated for three months, with “enforcers” making sure that stores carried only one brand of bread. The two companies set prices for bread which neither was allowed to discount, although the price was within the legal limit for prices.

The report was issued in March, and the bakeries were given until June to implement it by the Knesset. That failed to happen, so the deadline was extended to September, the report said.