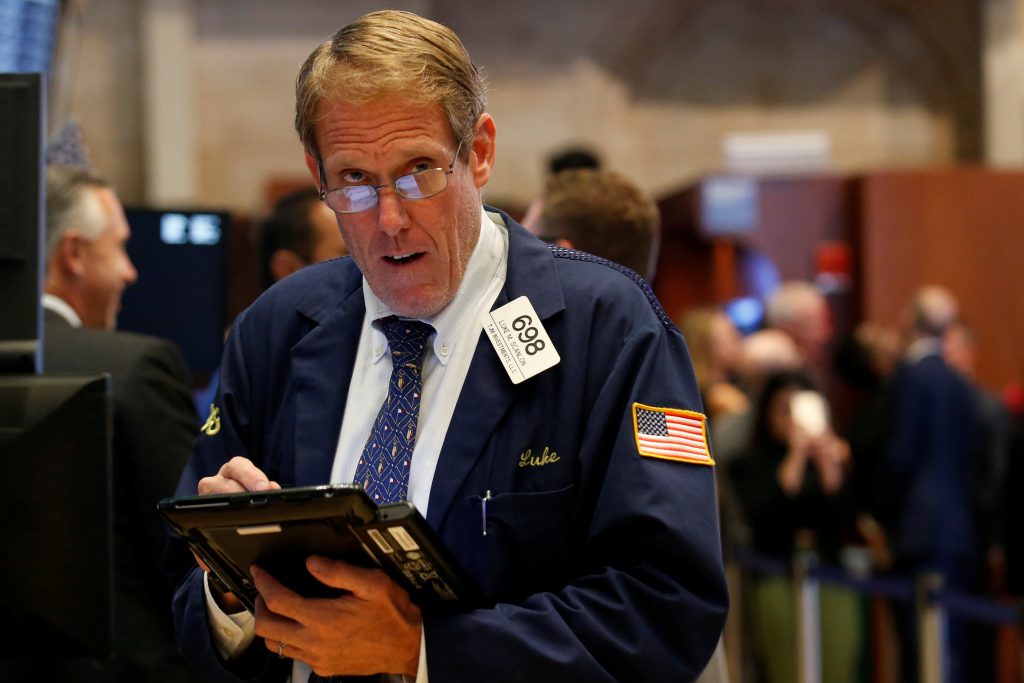 U.S. stocks are down in afternoon trading Wednesday as energy companies fall with the price of oil and makers of chemicals and other materials take losses. A survey of private employers showed that hiring continued at a solid pace in August. Stocks are on track for their first monthly loss since February.

ENERGY: Energy prices slumped after the U.S. government said crude oil stockpiles increased by 2.3 million barrels last week, a bigger gain than analysts expected. Gasoline stockpiles shrank, but not as much as investors had hoped.

TAXED: Tax preparer H&R Block posted a bigger first-quarter loss and less revenue than analysts expected. The company, which reported weak results from tax season this spring, said it is facing more competition in the tax prep industry as well as a growing number of independent tax preparers. H&R Block stock dropped $2.77, or 11.4 percent, to $21.43, and it’s down 36 percent this year.

WHISKEY SOUR: Brown-Forman, the maker of liquors including Jack Daniel’s whiskey and Finlandia vodka, slumped after its sales fell short of estimates. Brown-Forman said its results were hurt by weak sales in emerging markets and the strong dollar, which makes U.S. goods more expensive overseas. The stock declined $1.98, or 3.9 percent, to $48.35.

JOBS DATA: Private U.S. businesses added 177,000 jobs in August, according to a survey by payroll processor ADP. After weak hiring this spring, results from July and August suggest employers are bringing on workers at a healthy clip. The federal government will release its own jobs figures on Friday, and analysts expect a gain of 180,000 jobs. Investors think the Federal Reserve is more likely to raise interest rates later this year if hiring stays solid.

CHICO’S CLIMBS: Clothing chain Chico’s FAS gained $1.38, or 12.2 percent, to $12.68 after its second-quarter profit was greater than analysts excepted.

PALO UH-OH: Security software company Palo Alto Networks gave a weak profit forecast for the current quarter and its shares gave up $12.67, or 8.8 percent, to hit $130.78.

VIVA VEEVA: Veeva Systems, which provides cloud-based software services for life sciences companies, raised its profit and sales estimates for the year. Its stock jumped $2.98, or 7.9 percent, to $40.62.

DOG DAYS OF SUMMER: Stocks aren’t far from record highs, but they have fallen four of the last five days. The S&P 500 is down about 0.4 percent in August, putting a five-month winning streak in jeopardy. The biggest losses have gone to phone and utility companies, while concerns over drug pricing have affected health care stocks. Banks have risen the most as investors grow more optimistic that interest rates will increase.

EUROPEAN VIEW: Economic data was relatively downbeat, suggesting the currency bloc’s central bank could soon do the opposite of the Fed: give more stimulus. Inflation in the eurozone was stuck at a low 0.2 percent annual rate in August and unemployment also showed no improvement at 10.1 percent.