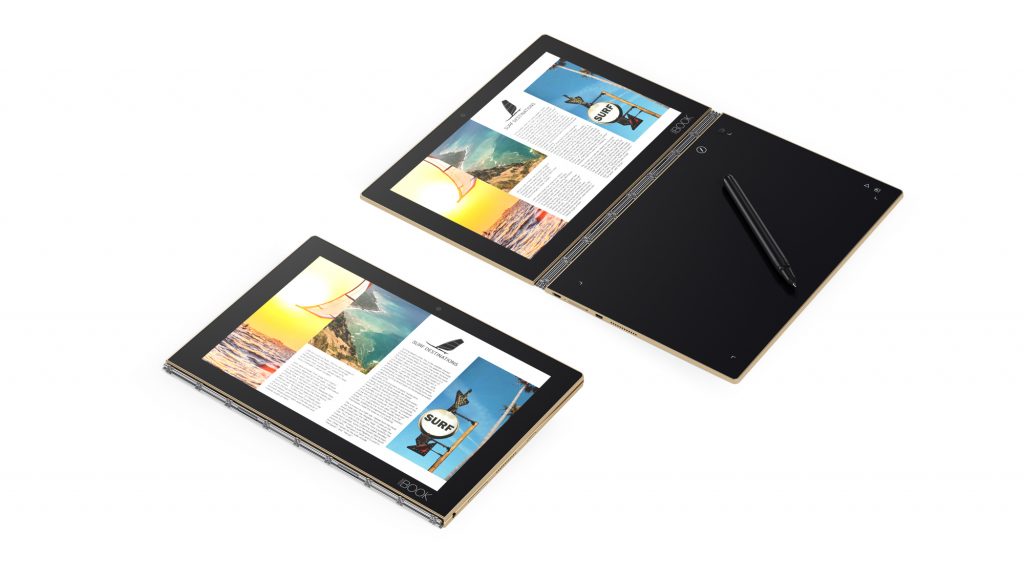 Lenovo unveiled a twist on the laptop: Its new Yoga Book won’t have a physical keyboard.

It’s an odd choice, given that Apple, Samsung and other tablet makers are pushing professional tablet models with keyboard accessories. Those companies are hoping to appeal to businesses and individuals looking to replace their laptops.

In Lenovo’s case, the 10-inch Yoga Book retains the clamshell design of the laptop, but puts a second touchscreen where the keyboard normally goes. People can type on a touchscreen keyboard there, or write or draw on that second screen with an included stylus. You can even use a regular pen or pencil, though you’d want to put a sheet of paper over the screen to avoid damage.

Although Lenovo calls Yoga Book a tablet, the keyboard part isn’t detachable, making the device a laptop. The keyboard, though, can fold all the way to the back to make the device feel more like a tablet.

The Yoga Book was unveiled Wednesday at the IFA tech show in Berlin.

Jeff Meredith, a Lenovo vice president, said the Yoga Book might not be appropriate for extensive typing, but should be suitable for people — especially younger people — who now use the phone’s touchscreen to respond to email at night or even take notes in classrooms.

He added that when BlackBerrys were still popular, people couldn’t imagine getting rid of physical keyboards on their phones, either.

The Yoga Book will start shipping in the coming weeks. An Android version will cost $500, and Windows will be $600.

The unveiling came hours after rival computer maker Acer unveiled what it calls the world’s first laptop to measure less than a centimeter. The Swift 7 is 9.98 millimeters (0.39 inches), to be exact. But Lenovo says the Yoga Book is thinner, at 9.6 millimeters, or slightly more than the thickest iPad at 7.5 millimeters.