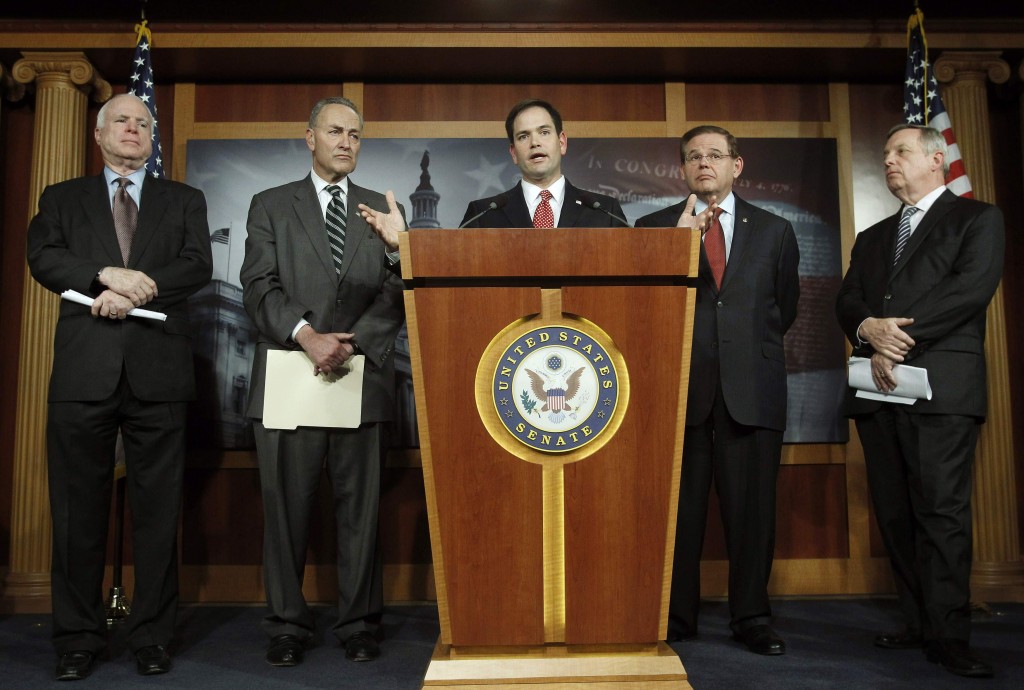 Republican voters in Arizona and Florida are expected to pick Senators John McCain and Marco Rubio as their respective Senate nominees when they go to the polls on Tuesday, but one name not on either ballot, Donald Trump, looms large.

The Republican presidential nominee has endorsed both McCain and Rubio in their re-election bids even though he has rocky relations with both senators.

Trump offended McCain and many other Republicans last year by suggesting that the maverick senator and party’s 2008 presidential nominee was hardly a war hero since he was captured during the Vietnam War after his airplane was shot down during a bombing mission.

In March, Trump ended Rubio’s presidential bid by trouncing him in the Florida primary.

During their re-election efforts, both McCain and Rubio have offered support for Trump as the party’s White House nominee. But they have tiptoed around him, mainly out of concern that his provocative comments on illegal immigration, Muslims, and U.S. support for NATO, could alienate moderate and independent voters in their states.

At the same time, they have steered clear of attacks on Trump that might antagonize his core supporters.

Adding to the intrigue is that the fates of the two senators will likely play a big role in whether Republicans can upset expectations and maintain majority control of the Senate after the Nov. 8 election.

But first, McCain will have to win Tuesday’s Republican primary in Arizona and Rubio will have to prevail in Florida.

McCain, who is trying to extend a 30-year Senate career, faces a challenge from physician and former state Senator Kelli Ward, who is aligned with the conservative Tea Party movement.

McCain leads Ward, 55 percent to 29 percent, according to a CNN opinion poll released last week. But Ward is ratcheting up her attacks, arguing: “It’s time to defeat the establishment and retire McCain.”

Ward has aligned herself with Trump, who will face Democrat Hillary Clinton in the presidential election.

Echoing Trump’s call for the building of a wall on the southern border with Mexico, Ward has boasted: “It’s time to mix the mortar to fix the border.”

Trying to neutralize Ward’s appeal with conservatives, McCain has touted his support for gun rights, his vow to cut government waste, and endorsements from anti-abortion leaders.

If McCain, who chairs the Senate Armed Services Committee, wins on Tuesday, he would face Democratic Representative Ann Kirkpatrick.

While McCain has said he is engaged in the toughest re-election fight of his career, the CNN poll has him opening a 13-point lead over Kirkpatrick.

Rubio, who decided not to seek re-election to the Senate last year in order to pursue the Republican presidential nomination, jumped into the race in June after his failed White House bid.

His late decision to seek a second Senate term came at the urging of Republican Party leaders, who view him as their best hope for preventing Democrats from taking the seat.

That prompted the major Republican Senate candidates to quit, leaving Carlos Beruff, 58, a millionaire homebuilder and newcomer to politics, as Rubio’s main challenger in the primary. Like Ward, Beruff has embraced Trump and has accused Rubio of only offering Trump lukewarm support.

Rubio is polling well ahead of Beruff. A win on Tuesday means Rubio would likely face Representative Patrick Murphy, who leads the Democratic field.