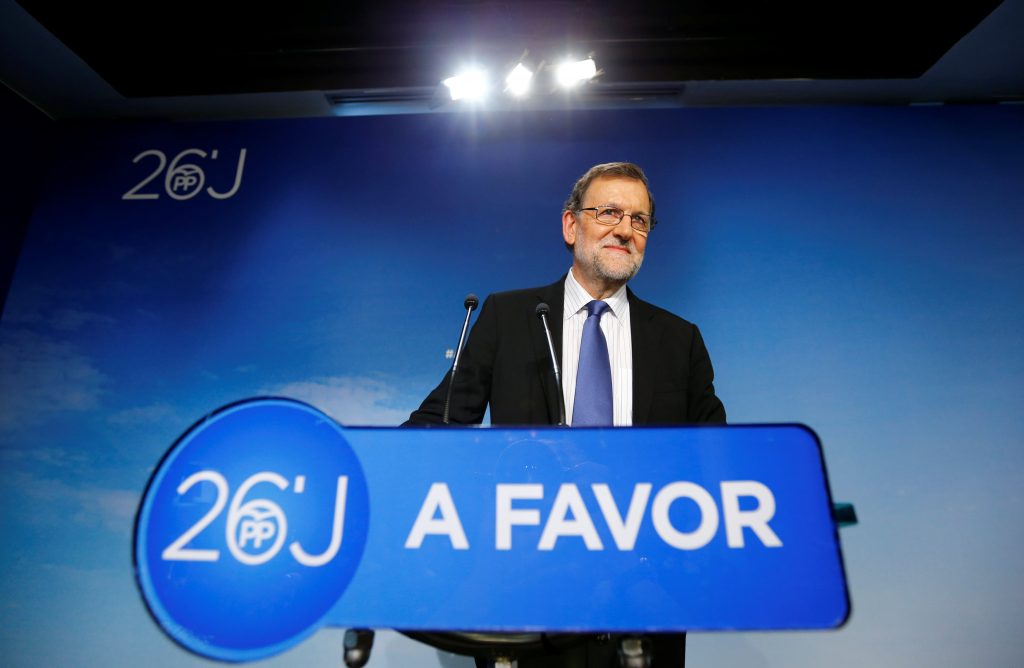 The clock starts ticking on Wednesday toward what could be Spain’s third national election in a year, when acting Prime Minister Mariano Rajoy faces a confidence vote in parliament for a second term in office.

Spain has been without a functioning government since inconclusive elections in December and June failed to hand a convincing mandate to any political party. So far, party leaders have been unable to agree on forming a coalition.

The eight-month political deadlock has delayed investments in infrastructure such as roads and rail and put high-ranking government appointments on hold, leaving some Spanish embassies without an ambassador.

Rajoy’s center-right People’s Party (PP) won the most votes in June’s election but lacks the majority it needs to win the vote even with support from centrists Ciudadanos (Citizens), Spain’s fourth-biggest party.

The opposition Socialists have refused to back Rajoy or smooth the way to a PP-led minority government by abstaining in a second confidence vote, which will be held on Friday if Wednesday’s ballot fails. In the second vote a simple majority will suffice to put Rajoy back in power.

The Socialists are unlikely to back down from that position given local elections in September in the northern regions of Galicia and the Basque Country where support for Rajoy’s PP could cost votes for the left-wing party.

Spain’s economy, on the rebound from a recession which ended three years ago, has powered ahead despite the lack of a functioning government, with the latest data showing strong growth fueled by consumer spending and demand for exports.

The acting government expects the economy to expand 2.9 percent this year – one of the fastest rates in the euro zone. However, economists say growth could be even higher if political uncertainty was removed.

“The lack of government is having a negative impact,” said Miguel Cardoso, an economist at BBVA, whose estimate of 3.1 percent for economic growth this year would be about 3.5 percent if there was a government in place.

His forecast for growth next year would be about 0.7 percentage points higher if there was a central administration in office to firm up public spending plans and provide certainty over policy for potential investors, he said.

The political uncertainty is already sending a chill through sectors like construction.

Construction activity dropped 0.7 percent in the second quarter from the previous period, government data showed on Thursday, as decisions on public works projects stalled, down from growth rates of over 1 percent at the end of last year.

Seopan, an association that represents builders like ACS and OHL, said spending on public contracts slumped by more than half to record lows in the first quarter, battered by the lack of a central administration to sign off on projects and six years of spending cuts.

Beyond industry, the political vacuum means all appointments of high-ranking public servants have been put on hold.

This has left Spanish embassies in Jamaica, India and Belgium without an ambassador as former diplomats died or left their posts, a Foreign Ministry source said, while ambassadors to Italy and Russia are staying on past their retirement age.

The political deadlock also delays drawing up next year’s expenditure plans and risks missing the European Union’s deadline of mid-October to submit a budget. This could damage investor confidence and raise the possibility of sanctions.

If Rajoy’s bid to become prime minister fails in the second vote, it will open a two-month window to try and form a government, after which a new election would automatically be called, possibly on Christmas Day.

Opposition parties, however, want to change Spain’s electoral law to shift the election to an earlier date.

By the time of Wednesday’s vote, Spain will have been 254 days without a government, the longest time in the country’s democracy, although falling short of Belgium’s 589-day world record for a democracy to form a coalition government.

Spaniards are growing increasingly impatient with politicians who have struggled in recent days even to agree on who sits where in parliament, leading to increased disengagement with politics.

“I’ve never abstained before, but if there’s another vote maybe I will,” said Isabel Moreno, a 34-year-old doctor speaking in a busy central Madrid square.

“I don’t care anymore what happens, I just want there to be some kind of an agreement.”