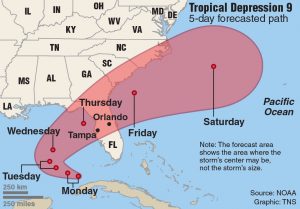 In their 11 a.m. advisory, National Hurricane Center forecasters said the system would likely become a tropical storm later Monday. Located about 170 miles west, southwest of Key West, the storm had slowed to about 7 mph as it moved west. Forecasters expect it to begin turning toward the north Tuesday.

While South Florida managed to dodge much of the rain predicted for the weekend, forecasters say this week will likely be different. As the storm moves into the Gulf, the moisture it’s packing should spread and lead to heavy rain and flooding in parts of South Florida by mid week. Forecasters called for three to five inches through Wednesday, with scattered thunderstorms and squalls today.

The storm is also churning up rip currents along Atlantic beaches, the National Weather Service said, which could spread to the Gulf.

Heavy rain is also expected to continue over Cuba, with four to eight inches pounding most of the island, and as much as 12 inches in isolated locations. So much rain could trigger flash floods and mudslides, forecasters warned.

Most computer models show the storm making a turn to the right and tracking back over Florida later in the week as it speeds up. The center of the storm, which struggled to form all last week as it pushed west, was located on the northwest side. How powerful it becomes remains somewhat uncertain, with wind shear expected to pick up over the next three days and smother any strengthening. So far, forecasters are only giving the storm a 30 to 40 percent chance of producing tropical storm force winds by the time it crosses over the state.

A hurricane hunter plane is scheduled to take a second look at the storm later Monday.

Forecasters were also keeping an eye on another tropical depression off the Carolinas and Hurricane Gaston, located about 900 miles east of Bermuda at 11 a.m. The depression, which was crawling along about 7 mph, is expected to reach the Outer Banks by late Tuesday, after it intensifies to a tropical storm. Forecasters issued a tropical storm watch for the north part of the coast, from Cape Lookout to the Oregon Inlet.

Farther east, Gaston had nearly stalled to just 2 mph as winds reached 110 mph. The hurricane is expected to keep moving to the northeast, but begin fizzling by Saturday as it nears the Azores.