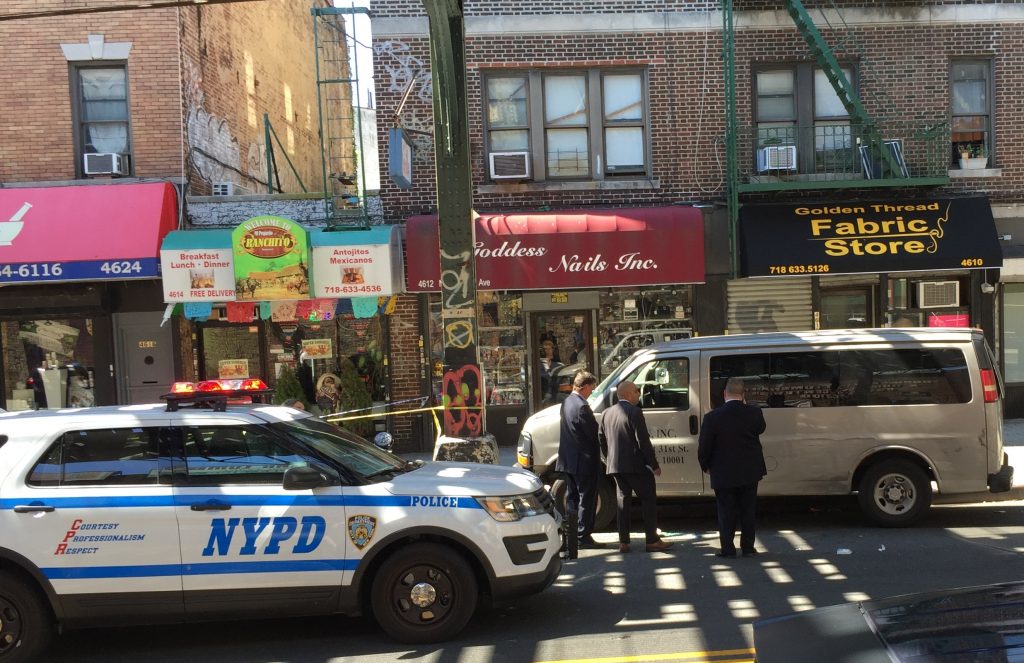 According to the New York Police Department, at 12:20 p.m., a 36-year-old black male “was shot numerous times while driving his vehicle. It appears a vehicle came up next to his and shot the victim multiple times.” The victim was taken to Maimonides Hospital, where he was pronounced dead.

It appears that the victim was targeted.

After the victim was struck, his vehicle slammed into the back of another vehicle, a Honda Odyssey. The driver of that vehicle, an elderly black female, was unharmed, but a friend with her in the vehicle was taken to the hospital. Two passengers in the victim’s vehicle were unharmed.

Witnesses reported hearing three or four shots. The victim’s vehicle, a gold van, had at least three bullet holes on the driver’s-side door.

No arrests have been made.

The shooting occurred just across the street from Boro Park Lumber and Home Center.

“I was sitting and doing my work when I heard, “Boom-boom-boom-boom,” said Sam Levi, the store’s long-time manager. “A woman who had seen the shooting came running into the store, with her baby, screaming hysterically.”

Another store employee said that a customer related a miraculous occurrence.

“A man with two little children came into the store immediately after the shooting with tears in his eyes,” he said. “The man said he had been standing at the spot of the shooting a moment earlier. His little daughter said she needed to use the bathroom, so we crossed the street, and then the shooting occurred.”

New York State Assemblyman Dov Hikind, who has an office nearby, was at the scene of the shooting and spoke with Hamodia.

“We are thankful that there were no stray bullets. People are back from the country, walking around, shopping, with their kids; thank G-d, no one else was hurt.

“These people obviously targeted the victim, but it uproots the tranquility of the neighborhood when something like this happens.”