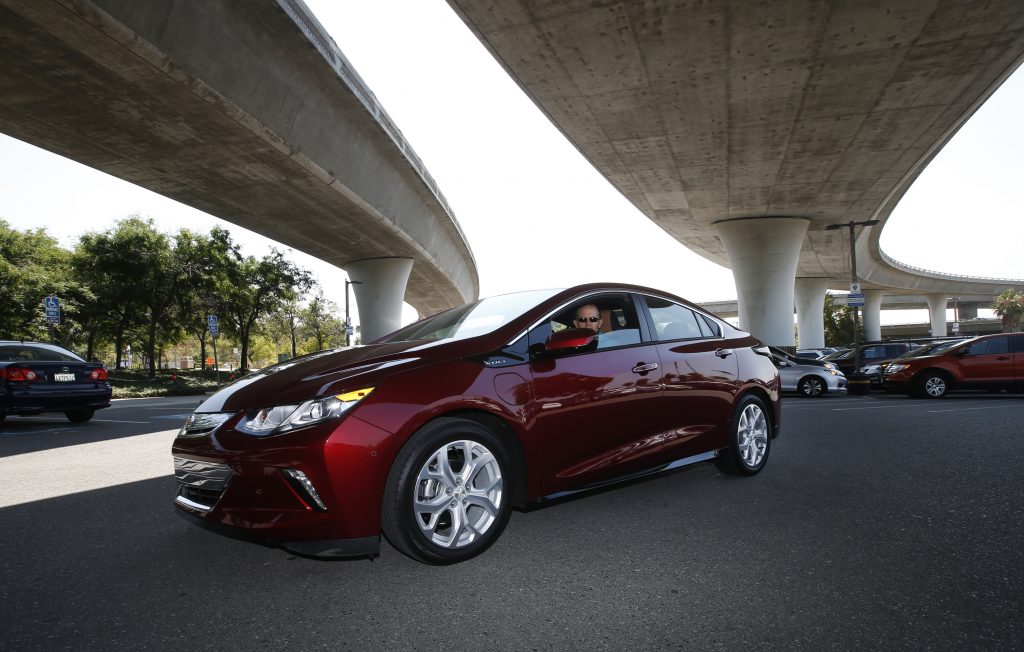 Even in these days of cheap gasoline, there’s still something liberating about not filling up.

I got a taste of that joy recently when I test-drove a pair of brand-new cars: The 2017 Ford Fusion Energi and the 2017 Chevrolet Volt. I drove each for more than a week, running errands, going to work, and driving to catch the train. I not only didn’t have to visit a gas station, I barely used any gas at all in either one.

I loved the Volt, but enjoyed driving both. They were fun cars for more reasons than just saving gas.

Both the Volt and Fusion Energi are plug-in hybrids, a class of car that promises some of the same environmental bona fides as full-electric cars without their usually limited overall range. The two vehicles are part of a new wave of plug-ins that will be rolling into showrooms over the next year.

Plug-in hybrid vehicles are kind of a cross between a more traditional hybrid car like Toyota’s Prius and an electric vehicle like Nissan’s Leaf. They include both an electric motor and a gasoline engine, but they have larger battery packs than regular hybrids, which allow them to operate at times like full electric vehicles. As they would with other electric vehicles, users have to recharge the batteries by plugging them into a wall outlet or recharging station.

The electric-only range for a plug-in hybrid is typically far less than that of an all-electric car. But their gasoline engines usually give them a total range that significantly exceeds electric vehicles and, in some cases, can better a typical gasoline-powered vehicle.

Regulators and car companies are promoting plug-ins as a way to save on gas and cut carbon emissions. Federal and state governments have given drivers extra inducements to buy them. They qualify for California’s carpool lane stickers, for example, and purchasers are eligible for state and federal tax credits of up to $9,000 combined.

Plug-in vehicles aren’t exactly new. The first Volt debuted in late 2010, and Toyota and Ford both released their first production plug-in hybrids in 2012.

But like other first-generation products, those first plug-ins weren’t polished. They drew criticism for being pricey, for having very limited electric-only ranges, and for having gas engines that weren’t super-efficient. And consumers only had a handful from which to choose.

The next generation of plug-in hybrids will address many of these concerns. Prices have come down. Electric-only ranges have gone up on some vehicles, as has their gasoline engines’ efficiency. And consumers will soon have a whole lot of choices, with models coming or already in showrooms from companies including Audi, BMW, Kia, Mercedes-Benz, Toyota and Volvo.

Two of the first of that new generation, the Volt and the Fusion Energi, represent two distinct takes on plug-in technology and how such vehicles should look and feel.

The Volt is designed to maximize its electric range. Its large battery pack, which stores more than twice as much electricity as that in the Fusion Energi, is located in the center of the car, where the transmission would be in a rear-wheel drive vehicle. That placement means that you can’t seat more than four full-sized adults in the car, because the batteries take up much of what would be the middle seat in the back. So, while it’s a great commuting car, it would be fairly cramped for family trips.

Chevy debuted this new generation of Volt in a limited way last year, then expanded its distribution with this year’s model. Compared with previous versions, the newer Volts are lighter and have a smaller gas engine. The result is much improved efficiency and range. The new Volt will go 53 miles on battery power alone, up from 38 miles previously, according to EPA estimates. And it gets 42 miles to the gallon when it’s running on gas, up from around 37 in the prior models. Because of its improved efficiency, its total range is now 420 miles, compared to 380 in the previous generation.

That extended electric range is amazing. Despite driving my test vehicle all over the Bay Area for more than a week and forgetting at times to recharge it at night, I still only ended up using about a quarter of a gallon of gas while I had it. And while it’s known for its efficiency, the Volt was zippy and fun to drive.

Compared to the Volt, the Fusion Energi was larger and felt more like a standard family sedan. It could comfortably fit five people inside, albeit with one big trade off — trunk space. The car’s battery pack is placed right behind its rear site and takes up a large portion of what would be the trunk. Indeed, the Fusion Energi has less trunk space than the smaller Volt and about half that of the all-gas powered Fusion.

Ford has optimized the car for total range. With its battery all charged and its 14 gallon gas tank full, it will go about 610 miles. That’s up about 60 miles from last year’s model and is great if you’re planning on taking it on long trips.

But the car comes up short when it comes to electric range. The EPA estimates it will go about 22 miles on battery power. That’s up two miles from the prior Fusion Energi, but still a far cry from the Volt. I didn’t drive the Fusion Energi all that much, but I found it wasn’t difficult in everyday driving to use up all the juice in its batteries.

Both cars have attractions beyond their fuel efficiency. Both offer broad selections of semiautonomous features as options, including adaptive cruise control and automated lane keeping. Both have new infotainment systems that support Apple’s CarPlay and Android Auto. And both have built-in cellular connections that allow users to remotely start them and unlock their doors.

Such features help make both cars a pleasure to use. Both cars show how plug-in vehicles have now matured to the point that you don’t have to sacrifice much to get a much greener car.