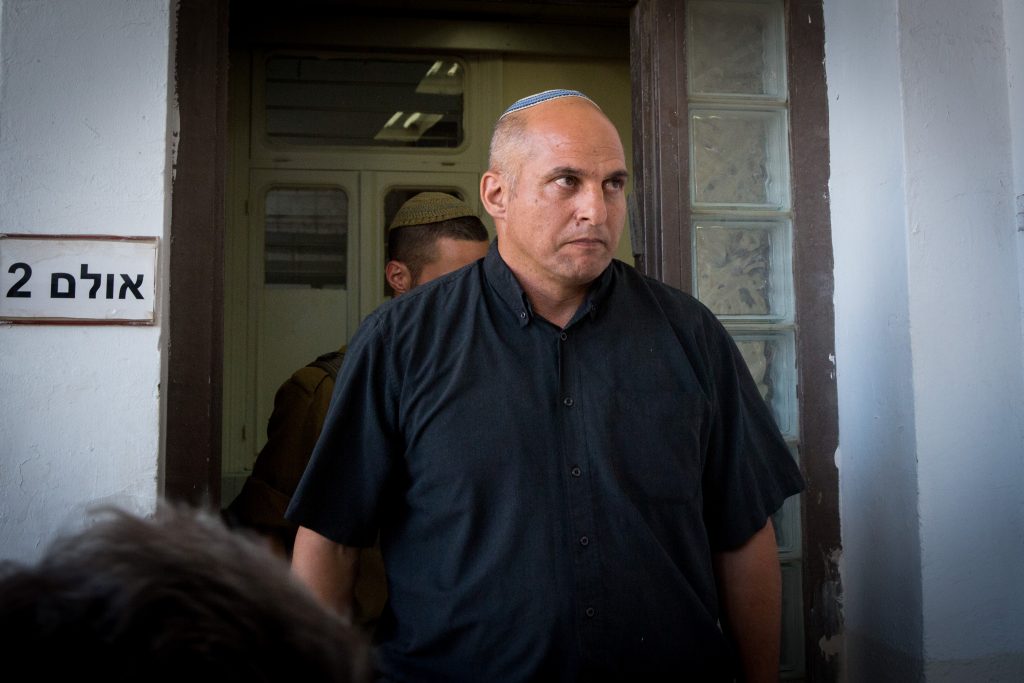 The security chief for Chevron’s Jewish community told the court on Sunday that IDF soldier Elior Azariya was justified in shooting the terrorist who was lying on the ground, and that the senior military echelon had unfairly singled out the defendant, who acted much as others had done in similar situations but were not put on trial.

The official, Eliyahu Libman (Lt.-Col., Res.), who was at the scene at the time of the incident, asserted that the widely used term “neutralized” used to describe the terrorist, implying he was no longer a threat, was erroneous. The term is only applicable to an assailant who has either been killed or already in handcuffs, neither of which was the case at the time of the shooting, he said.

He backed Azaria’s statement that the fact Sharif was wearing a jacket on a hot day made him a threat. “Anyone with experience knows… that there is serious concern of a bomb” in such cases, Libman said.

“In terrorist incidents I witnessed, I saw with my own eyes that in every instance in which a terrorist attacked, soldiers shot him…until he was neutralized… and [shot] a bullet to the head to ensure that the terrorist could not set off a suicide belt or continue the attack. These soldiers never went to court,” he testified.

Military Prosecutor Lieutenant Colonel Attorney Nadav Weissman sought to cast doubt on his testimony during cross-examination, asking repeatedly why he had not shouted a warning to those in the vicinity if he really felt there was imminent danger.

Libman explained, “When I say that I feel danger, that doesn’t necessarily mean that I have to raise my hands and shout. The Prosecutor is trying to mislead the court. According to the questions that you’re asking, it’s clear that you’ve never been at the scene of a [terrorist] incident and that your pulse has never been above 200. Maybe in the workout room. I don’t have to shout when there’s danger, I can feel danger without doing anything. I have more than 25 years experience [on the scene of security incidents].”

The Prosecutor suggested: “Maybe the answer is simpler, that you didn’t think at all about the possibility of an explosives belt – neither you nor those around you.”

Libman responded that “Since the Prosecutor is asking me an unprofessional question [about something] that never happened, [I will answer that] I was in the field and I felt danger. It can’t be that a man without any experience and connection to reality is telling me how I felt.”

The testimony of Elimelech Karzan, an ambulance driver at the scene, also supported the contention that there was a feeling of danger.

“I felt threatened at the scene,” he said. “I parked the ambulance near the terrorist and got out of the car armed with a weapon. The medical team decided to evacuate the injured soldier in my ambulance. Suddenly, I noticed that the terrorist was moving.”

“At this point, I was apprehensive that the terrorist would activate an explosives belt or pull out a weapon, because he was wearing a closed-up coat on a hot day, and it was suspicious…

“Everyone started yelling: ‘He has an explosives belt on!’ and it was frightening. I was then very apprehensive about the terrorist. I got back in my ambulance and drove from the scene, and suddenly I heard shooting… It was clear to me that they had neutralized the terrorist.”

Libman went further in his testimony, claiming, as others have done outside the courtroom, that the security establishment had unfairly marked Azaria for punishment from the outset.

“There was an atmosphere of piling on whoever thought different from the agenda. They’d marked their target,” he said. “For many years I was a part of the inquiry into many such events. This time it was done behind closed doors, and they didn’t want to hear what I and others had to say. I am concerned that it is not by chance that we were not summoned [by security officials to the inquiry], but as part of an agenda” to bulldoze Azaria.

Defense attorney Eyal Besserglick said Sunday morning on Army Radio that “witnesses who were in the area or nearby will testify, some of whom were not questioned by military police. We have all kinds of expert witnesses.

“There will be a lot of surprises,” he predicted.