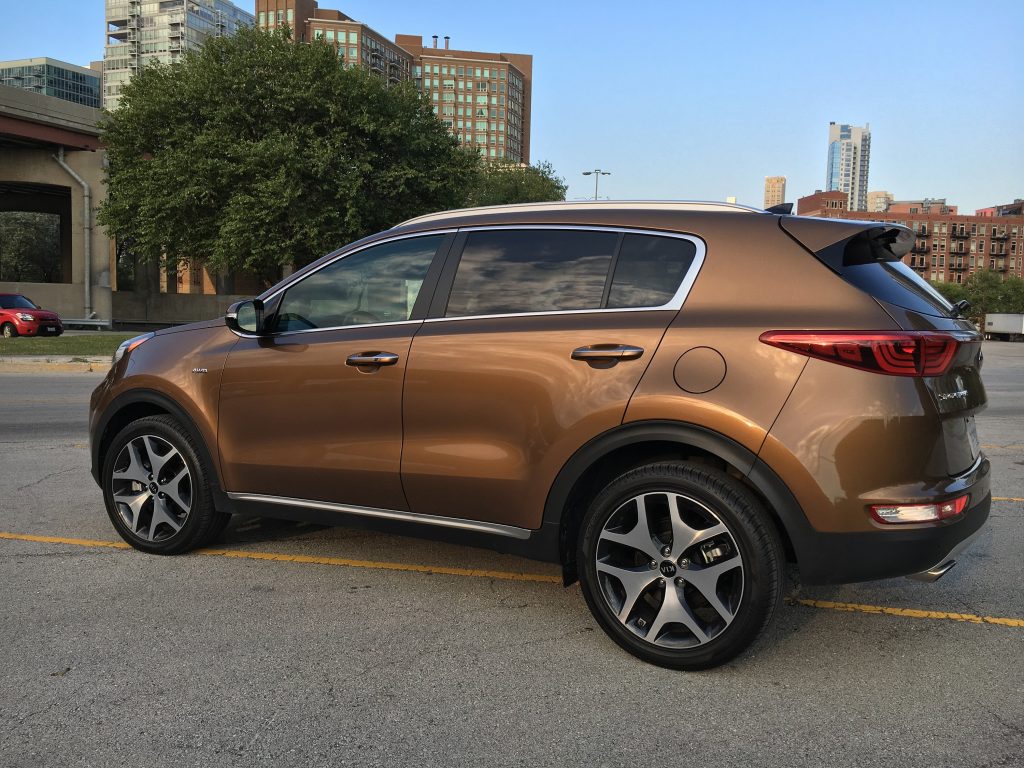 With so many crossovers on the market, automakers are playing with paint, parts and design — anything and everything — to stand out.

The fourth-generation Kia Sportage once again steps out of the compact crossover class with a sharp design, big wheels and peppy turbo four.

I called the test model gold, my daughter called it bronze, Kia called it burnished copper. I liked it, though the majority of people disagreed.

The prominent snout on the Sportage is flanked by adaptive lights that turn with the car and four-cube fog lights in the top-of-the-line test model. The wheelbase is stretched by 1.6 inches over the last model, and the spoiler and rear windshield cut into the computer mouse shape shared by much of the class. It’s curved and stretched in the front, but nipped and tucked in the back.

The broader wheel arches house 19-inch alloy wheels that give it a high sporty dune buggy vibe. The big wheels and lower-profile tires not only look cooler than the average crossover, they also provide better road feel, which is presumably what buyers of the top-of-the-line SX Turbo model want.

Direct injection 2-liter turbo four-cylinder engines are arguably the most popular engine choice in modern cars. Like the others, Kia’s is quick off the line with little lag, which helps in passing situations. In AWD it pumps out 237 horsepower and a very impressive 260 pound-feet of torque, available at just 1,450 rpm.

It weighs nearly 4,000 pounds, however, so there’s no mistaking this crossover for a hatch. It handles like a car closer to the ground, thanks to the redesigned independent front and rear suspensions and what Kia says are firmer shock absorbers. It felt more capable than its sister, the Hyundai Santa Fe Sport, which has the same engine, weighs 100 pounds less, and is larger inside.

That weight also gives it lackluster mpg rating for this class, at 20 mpg city and 23 mpg highway. In a mix of modes, and a mix of driving conditions over 100 miles at an average of 33 mph, it averaged 26.5 mpg in Eco mode. The A/C was mostly off but that shouldn’t explain such a large discrepancy. I reset the trip meters and did a few 25-mile commutes in Sport and Normal mode at about the same average speed and about the same economy.

The ride is quiet even with the panoramic sunroof. The interior is nice in that homogenous Hyundai/Kia way, with black leather interior, sensible combination of climate dials, radio buttons, redundant steering controls and an 8-inch touch screen.

The price is competitive at this trim level and the Sportage should be in the short list of contenders for the compact crossover buy.

Parting shot: Capable and quirky enough to be distinctive