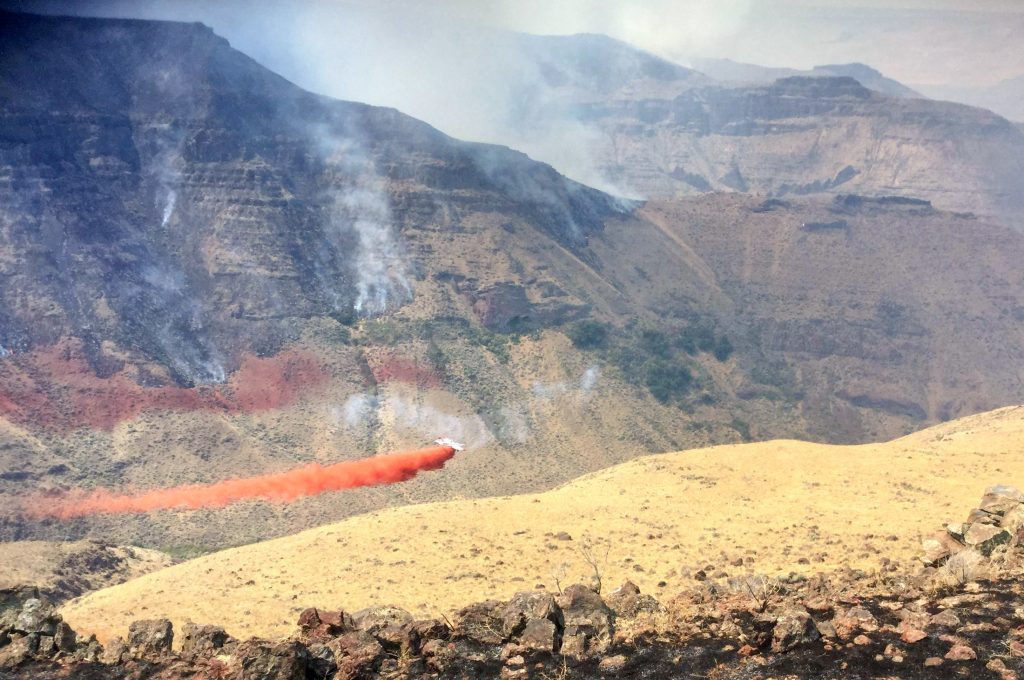 Thirty-five large, uncontained wildfires are burning in the West, and firefighters are making initial attacks on another 112 new fires, trying to prevent them from getting big.

Late last week the National Interagency Fire Center in Boise, Idaho, upped what it calls the National Preparedness Level to 4, one shy of the highest level, as competition for limited firefighting resources increased.

Here’s a look at the major wildfires in the West:

A wildfire that has destroyed 45 homes on California’s central coast continues to grow, and more residents are being warned to get ready to evacuate.

Cal Fire said Wednesday that the 10-day-old blaze has charred nearly 64 square miles of dry brush and timber. The fire is 39 percent surrounded after being stuck at 35 percent for several days.

At least 2,400 people are under evacuation orders in San Luis Obispo and Monterey counties. Additional evacuation warnings were issued Wednesday.

Cal Fire’s Rich Eagan says flames are more than 2 miles from Hearst Castle, which remains closed but is no longer threatened.

A fire burning for a month north of Big Sur grew again to 135 square miles. Hundreds of homes remain threatened by the fire in rugged wilderness coast along Highway 1. It is 60 percent contained.

The Bonneville County Sheriff’s Office says evacuations are in place, with up to 70 buildings along U.S. Highway 26 threatened.

Officials say the human-caused fire reported Sunday about 7 miles east of Idaho Falls is making wind-driven runs to the north and east.

In central Idaho, a 160-square-mile wildfire in a remote, mountainous area continues to defy containment and burn through timbered slopes that are difficult for firefighters to reach.

Officials in Las Vegas are blaming poor air quality and a smoky haze in southern Nevada on wildfires in coastal and mountain areas of California.

A Clark County Department of Air Quality advisory issued Wednesday cites smoke and ozone from fires burning hundreds of miles to the northwest. The advisory remains in effect through Thursday.

Favorable weather conditions helped crews make progress Wednesday against a series of wildfires in Eastern Washington that have burned at least 18 homes this week.

A fire burning on the Spokane Indian Reservation was 30 percent contained. That fire covered more than 27 square miles and had destroyed at least 13 homes on the reservation, said Jamie Sijohn, a spokeswoman for the tribe.

“The devastating fire jumped the Spokane River from Lincoln County onto the Spokane reservation in three separate locations,” Sijohn said.

It roared toward the town of Wellpinit, forcing the evacuation of the entire town on Sunday. But that order has since been lifted, Sijohn said.

Meanwhile, a fire near the town of Davenport in Lincoln County covered 6.5 square miles, and was 20 percent contained.

Another fire south of Spokane, in the Valleyford area, was 50 percent contained. It had burned more than 10 square miles and destroyed at least five homes, officials said. Mandatory evacuations ended on that fire on Tuesday night.

A highway leading into Yellowstone National Park remains closed because of a wildfire burning in neighboring Grand Teton National Park in northwest Wyoming.

Fire spokeswoman Karen Miranda says prospects aren’t good for opening the road anytime soon because the fire is burning along the highway, which leads to the South Entrance of Yellowstone.

Travelers coming from the south can still access Yellowstone through Idaho and the park’s West Entrance.