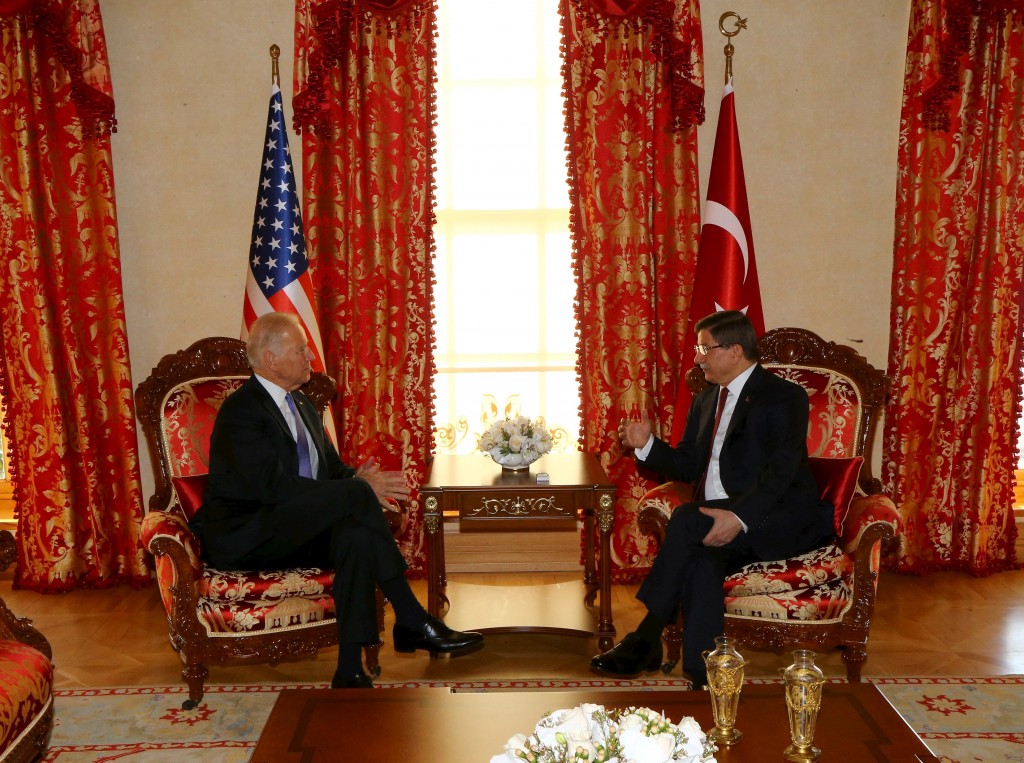 With suspicions on both sides mounting, the United States is struggling to preserve its wobbly partnership with Turkey as the Turks entertain closer relations with Russia and fume over a U.S.-based cleric blamed for orchestrating last month’s failed coup.

Vice President Joe Biden arrives Wednesday in the Turkish capital, Ankara, to try to smooth over recent strains. He comes bearing no assurances that the United States will agree to Turkey’s demand that it extradite expatriate and accused traitor Fethullah Gulen. Instead, he’ll try to convey that America values Turkey as a key NATO ally, amid worrying signs that the U.S. and Turkish approaches to the Syrian conflict may be diverging.

Tensions between the countries were already bubbling under the surface before the coup attempt July 15 and since have burst into the open. U.S. leaders were incensed when Turkish President Recep Tayyip Erdogan accused the United States of either supporting or backing the coup. As the U.S. issued denials, Turkish officials complained that Washington was slow to support Turkey’s government at its time of greatest need, even though the U.S. had expressed support for Erdogan during the violence that claimed 270 lives.

For its part, the U.S. has been rattled by Turkey’s recent increased cooperation with traditional U.S. foes Russia and Iran, reflecting the possibility that a frustrated Turkey could be rethinking its allegiance with the West in pursuit of regional stability. This month Erdogan traveled to Moscow to boost ties and possibly engage in a collaborative effort to end Syria’s civil war, something Moscow had previously sought to achieve with Washington. And following the Turkish foreign minister’s surprise trip to Iran last week, Turkish media reported that Erdogan planned to visit Tehran on Wednesday — the same day he’s also slated to meet Biden.

“Clearly President Erdogan is sending a message, by getting closer to Russia and Iran, that he’s unhappy with the attitude of the West,” said Bulent Aliriza, a Turkey analyst at the Washington-based Center for Strategic and International Studies. “Turkey’s still going to remain a NATO member and aspire for EU membership, but the atmosphere is worse than it was on July 14,” the day before the coup attempt.

But the U.S. and Turkey are unlikely to resolve their dispute over Gulen, who has lived in the U.S. state of Pennsylvania for 17 years in self-imposed exile. Gulen has denied any involvement in the coup attempt. Turkey’s government has insisted the U.S. return him to Turkey immediately.

The U.S. government wants firm evidence before considering extradition. Senior officials in the Obama administration say Turkey’s extradition requests have been based on allegations of other crimes against Gulen, not evidence of involvement in the coup attempt.

U.S. officials, who briefed reporters ahead of Biden’s trip on condition of anonymity, said Tuesday’s talks in Ankara involved a Justice Department team assigned to consider the technical requirements of Turkey’s extradition request. The officials said Biden planned to tell Turkey’s leaders that their public allegations of U.S. complicity won’t help their cause.

“People have an expectation that Gulen should be returned to Turkey immediately,” said Gulnur Aybet, who teaches international relations at Turkey’s Bahcesehir University. “If the extradition request is refused or delayed I’m afraid that’s going to have serious repercussions.”

The U.S. once considered Erdogan a leader interested in promoting democracy and working with America. That optimism has been dampened as Erdogan cracks down on media and other freedoms and puts a premium on opposing outlawed Kurdish rebels — sometimes at the expense, in the Obama administration’s view, of focusing on IS.

Washington’s concerns about human rights and democracy in Turkey have intensified since the Turkish government detained or fired tens of thousands of police officers, soldiers, teachers and journalists following the abortive coup. The U.S. has been careful not to criticize Turkey publicly in order to avoid undercutting the overall U.S. message of support for Turkey’s government.

Turkey’s fragile security situation was highlighted over the weekend when a suicide bomber killed at least 54 people at a Kurdish wedding celebration in Gaziantep, near the Syria border. It was the deadliest in a string of attacks this year in Turkey, some committed by IS and some by the Kurdistan Workers’ Party.

Adding to U.S. worries, Turkish Prime Minister Binali Yildirim recently appeared warm to the possibility of Syrian President Bashar Assad maintaining a role in a transitional government. For years, both Turkey and the U.S. have called for Assad’s ouster, insisting he can’t be part of Syria’s future government.

A breakdown of ties to Turkey would be problematic for the U.S., which is counting on Turkey to pursue an identical approach towards fighting the Islamic State terror group and addressing extremism across the Middle East. Straddling Europe and Asia, Turkey shares borders with Iraq, Iran and Syria, where the porous border permits Islamic State fighters into Turkey and would-be recruits into Syria.