Politics INVESTIGATIVE REPORT: Many Donors to Clinton Foundation Met With Her at State
Politics 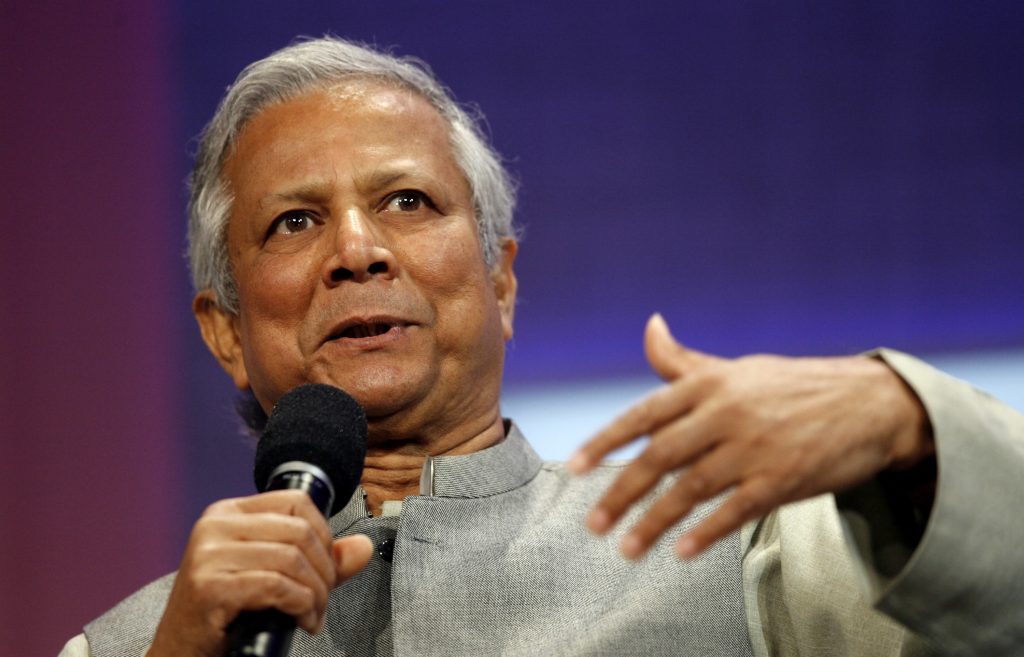 More than half the people outside the government who met with Hillary Clinton while she was secretary of state gave money — either personally or through companies or groups — to the Clinton Foundation. It’s an extraordinary proportion indicating her possible ethics challenges if elected president.

At least 85 of 154 people from private interests who met or had phone conversations scheduled with Clinton while she led the State Department donated to her family charity or pledged commitments to its international programs, according to a review of State Department calendars released so far to The Associated Press. Combined, the 85 donors contributed as much as $156 million. At least 40 donated more than $100,000 each, and 20 gave more than $1 million.

Donors who were granted time with Clinton included an internationally known economist who asked for her help as the Bangladesh government pressured him to resign from a nonprofit bank he ran, and a Wall Street executive who sought Clinton’s help with a visa problem.

The meetings between the Democratic presidential nominee and foundation donors do not appear to violate legal agreements Clinton and former president Bill Clinton signed before she joined the State Department in 2009. But the frequency of the overlaps shows the intermingling of access and donations, and fuels perceptions that giving the foundation money was a price of admission for face time with Clinton. Her calendars and emails released as recently as this week describe scores of contacts she and her top aides had with foundation donors.

The AP’s findings represent the first systematic effort to calculate the scope of the intersecting interests of Clinton foundation donors and people who met personally with Clinton or spoke to her by phone about their needs.

Last week, the Clinton Foundation moved to head off ethics concerns about future donations by announcing changes planned if Clinton is elected.

On Monday, Bill Clinton said in a statement that if his wife were to win, he would step down from the foundation’s board and stop all fundraising for it. The foundation would also accept donations only from U.S. citizens and what it described as independent philanthropies, while no longer taking gifts from foreign groups, U.S. companies or corporate charities. Clinton said the foundation would no longer hold annual meetings of its international aid program, the Clinton Global Initiative, and it would spin off its foreign-based programs to other charities.

Those planned changes would not affect more than 6,000 donors who have already provided the Clinton charity with more than $2 billion in funding since its creation in 2000.

“There’s a lot of potential conflicts and a lot of potential problems,” said Douglas White, an expert on nonprofits who previously directed Columbia University’s graduate fundraising management program. “The point is she can’t just walk away from these 6,000 donors.”

Former senior White House ethics officials said a Clinton administration would have to take careful steps to ensure that past foundation donors would not have the same access as she allowed at the State Department.

“If Secretary Clinton puts the right people in and she’s tough about it and has the right procedures in place and sends a message consistent with a strong commitment to ethics, it can be done,” said Norman L. Eisen, who was President Barack Obama’s top ethics counsel and later worked for Clinton as ambassador to the Czech Republic.

Eisen, now a governance studies fellow at the Brookings Institution, said that at a minimum, Clinton should retain the Obama administration’s current ethics commitments and oversight, which include lobbying restrictions and other rules. Richard Painter, a former ethics adviser to President George W. Bush and currently a University of Minnesota law school professor, said Bill, Hillary and Chelsea Clinton should remove themselves completely from foundation leadership roles, but he added that potential conflicts would shadow any policy decision affecting past donors.

Clinton campaign spokesman Brian Fallon did not respond to the AP’s questions about Clinton transition plans regarding ethics, but said in a statement Tuesday that the standard set by the Clinton Foundation’s ethics restrictions was “unprecedented, even if it may never satisfy some critics.”

Some of Clinton’s most influential visitors donated millions to the Clinton Foundation and to her and her husband’s political coffers. They are among scores of Clinton visitors and phone contacts in her official calendar turned over by the State Department to AP last year and in more-detailed planning schedules that so far have covered about half her four-year tenure. The AP sought Clinton’s calendar and schedules three years ago, but delays led the AP to sue the State Department last year in federal court for those materials and other records.

S. Daniel Abraham, whose name also was included in emails released by the State Department as part of another lawsuit, is a Clinton fundraising bundler who was listed in Clinton’s planners for eight meetings with her at various times. A billionaire behind the Slim-Fast diet and founder of the Center for Middle East Peace, Abraham told the AP last year that his talks with Clinton concerned Mideast issues.

Big Clinton Foundation donors with no history of political giving to the Clintons also met or talked by phone with Hillary Clinton and top aides, AP’s review showed.

Muhammad Yunus, a Bangladeshi economist who won the 2006 Nobel Peace Prize for pioneering low-interest “microcredit” for poor business owners, met with Clinton three times and talked with her by phone during a period when Bangladeshi government authorities investigated his oversight of a nonprofit bank and ultimately pressured him to resign from the bank’s board. Throughout the process, he pleaded for help in messages routed to Clinton, and she ordered aides to find ways to assist him.

American affiliates of his nonprofit Grameen Bank had been working with the Clinton Foundation’s Clinton Global Initiative programs as early as 2005, pledging millions of dollars in microloans for the poor. Grameen America, the bank’s nonprofit U.S. flagship, which Yunus chairs, has given between $100,000 and $250,000 to the foundation — a figure that bank spokeswoman Becky Asch said reflects the institution’s annual fees to attend CGI meetings. Another Grameen arm chaired by Yunus, Grameen Research, has donated between $25,000 and $50,000.

As a U.S. senator from New York, Clinton, as well as then-Massachusetts Sen. John Kerry and two other senators in 2007, sponsored a bill to award a congressional gold medal to Yunus. He got one but not until 2010, a year after Obama awarded him a Presidential Medal of Freedom.

Yunus first met with Clinton in Washington in April 2009. That was followed six months later by an announcement by USAID, the State Department’s foreign aid arm, that it was partnering with the Grameen Foundation, a nonprofit charity run by Yunus, in a $162 million commitment to extend its microfinance concept abroad. USAID also began providing loans and grants to the Grameen Foundation, totaling $2.2 million over Clinton’s tenure.

By September 2009, Yunus began complaining to Clinton’s top aides about what he perceived as poor treatment by Bangladesh’s government. His bank was accused of financial mismanagement of Norwegian government aid money — a charge that Norway later dismissed as baseless. But Yunus told Melanne Verveer, a long-time Clinton aide who was an ambassador-at-large for global women’s issues, that Bangladesh officials refused to meet with him and asked the State Department for help in pressing his case.

“Please see if the issues of Grameen Bank can be raised in a friendly way,” he asked Verveer. Yunus sent “regards to H” and cited an upcoming Clinton Global Initiative event he planned to attend.

Clinton ordered an aide: “Give to EAP rep,” referring the problem to the agency’s top east Asia expert.

Yunus continued writing to Verveer as pressure mounted on his bank. In December 2010, responding to a news report that Bangladesh’s prime minister was urging an investigation of Grameen Bank, Clinton told Verveer that she wanted to discuss the matter with her East Asia expert “ASAP.”

Clinton called Yunus in March 2011 after the Bangladesh government opened an inquiry into his oversight of Grameen Bank. Yunus had told Verveer by email that “the situation does not allow me to leave the country.” By mid-May, the Bangladesh government had forced Yunus to step down from the bank’s board. Yunus sent Clinton a copy of his resignation letter. In a separate note to Verveer, Clinton wrote: “Sad indeed.”

Clinton met with Yunus a second time in Washington in August 2011 and again in the Bangladesh capital of Dhaka in May 2012. Clinton’s arrival in Bangladesh came after Bangladesh authorities moved to seize control of Grameen Bank’s effort to find new leaders. Speaking to a town hall audience, Clinton warned the Bangladesh government, “We do not want to see any action taken that would in any way undermine or interfere in the operations of the Grameen Bank.”

Grameen America’s Asch referred other questions about Yunus to his office, but he had not responded by Tuesday.

Earlier this month, State Department spokeswoman Elizabeth Trudeau acknowledged that agency officials are “regularly in touch with a range of outside individuals and organizations, including nonprofits, NGOs, think tanks and others.” But Trudeau said the State Department was not aware of any actions that were influenced by the Clinton Foundation.

In another case, Clinton was host at a September 2009 breakfast meeting at the New York Stock Exchange that listed Blackstone Group chairman Stephen Schwarzman as one of those who attended. Schwarzman’s firm is a major Clinton Foundation donor, but he personally donates heavily to GOP candidates and causes. One day after the breakfast, according to Clinton emails, the State Department was working on a visa issue at Schwarzman’s request. In December that same year, Schwarzman’s wife, Christine, sat at Clinton’s table during the Kennedy Center Honors. Clinton also introduced Schwarzman, then chairman of the Kennedy Center, before he spoke.

Blackstone donated between $250,000 and $500,000 to the Clinton Foundation. Eight Blackstone executives also gave between $375,000 and $800,000 to the foundation. And Blackstone’s charitable arm has pledged millions of dollars in commitments to three Clinton Global aid projects ranging from the U.S. to the Mideast. Blackstone officials did not make Schwarzman available for comment.

When Clinton appeared before the U.S. Senate in early 2009 for her confirmation hearing as secretary of state, then-Sen. Richard Lugar, a Republican from Indiana, questioned her at length about the foundation and potential conflicts of interest. His concerns were focused on foreign government donations, mostly to CGI. Lugar wanted more transparency than was ultimately agreed upon between the foundation and Obama’s transition team.

“The Clintons, as they approach the presidency, if they are successful, will have to work with their attorneys to make certain that rules of the road are drawn up to give confidence to them and the American public that there will not be favoritism,” Lugar said.