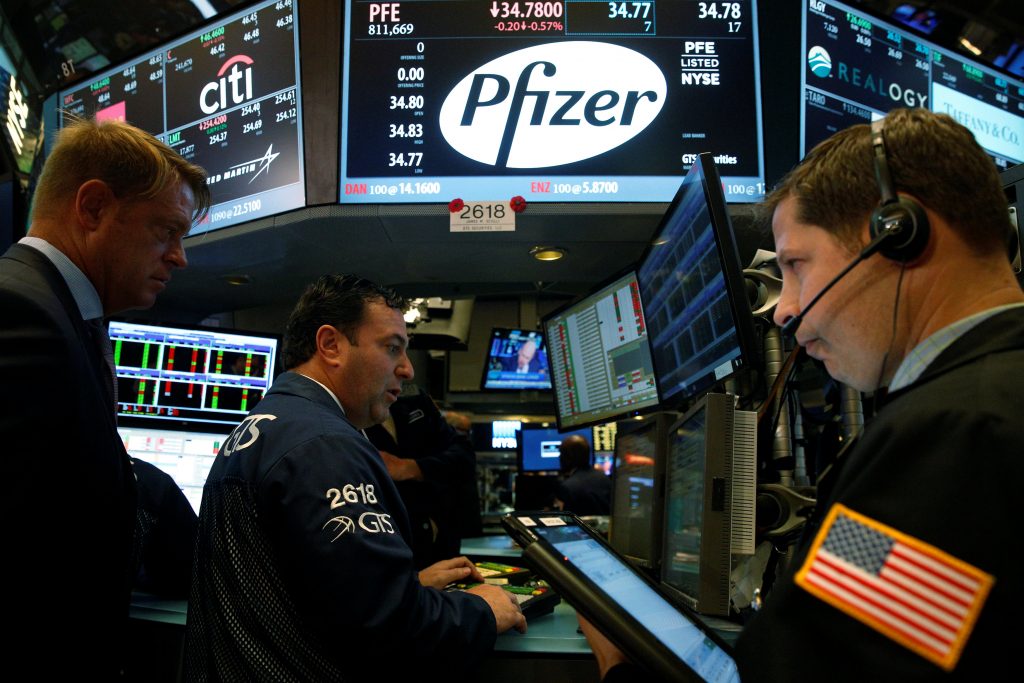 Stocks are moderately lower in midday trading Monday as the market drifts between small gains and losses. A drop in oil prices pulled energy companies lower. Investors were looking ahead to the Fed’s meeting in Jackson Hole, Wyoming, for clues on timing for possible interest rate hikes.

DRUGMAKER MERGER: Cancer drug maker Medivation jumped $13.24, or 20 percent, to $80.40 after pharmaceutical giant Pfizer announced it would buy the company for $14 billion, or $81.50 a share. Pfizer is buying Medivation for its heavily used prostate cancer drug Xtandi, which generates roughly $2 billion in sales a year.

ENERGY WEAKNESS: Oil prices fell sharply. U.S. benchmark crude lost $1.46 to $47.65 a barrel and Brent crude, used to price oil internationally, declined $1.54 to $49.34 a barrel. The drop in energy prices dragged down energy stocks, which lost 1.1 percent, more than the rest of the market.

FED WATCH: Investors were looking ahead to a speech by Fed chair Janet Yellen at an annual summer gathering in Jackson Hole for indications of how policymakers view the outlook for economic growth and interest rates. Analysts expect Yellen to express caution but support the impression the U.S. central bank is on track to raise rates as early as this year.

While investors do not expect the central bank to raise interest rates at its September meeting, there’s always the possibility and the increasing likelihood of a rate increase once the presidential election is finished.

ALL QUIET: Trading is likely to be subdued this week, as it has been all month. Second quarter earnings season is effectively over and the next major piece of economic data does not come until Friday, when Yellen will speak. The last time the S&P 500 had a move of 1 percent or more was July 8, when it rose 1.5 percent.