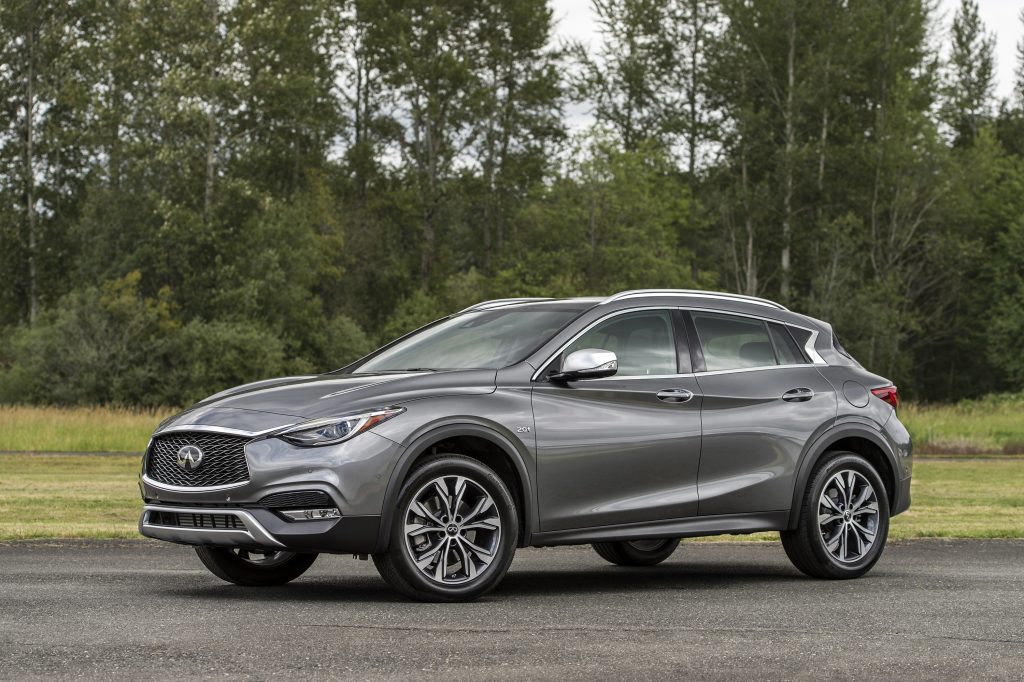 Infiniti, eager to capitalize on the current obsession with crossover utility vehicles, is coming to the market with a new one.

As of September, the luxury Nissan division is adding the QX30 to its current range of QX50, QX60, QX70 and QX80 CUVs and sport utility vehicles.

It’s meant to compete for attention with the Audi Q3, BMW X1, Lexus NX, Acura RDX, Volvo XC60 and even the Mercedes-Benz GLA, with which the QX30 shares a commonly developed platform.

That’s a crowded field of very appealing vehicles, and the QX30 is a worthy entrant. But how and why will anyone choose it over the competition? They’re all good cars.

The QX30, built in England and intended for the global crossover market, gets up the road on a 2.0-liter turbo engine, powered through a seven-speed dual clutch transmission.

Scooting around town and hopping on and off the freeway, it’s a great get-around car — full of pep, especially in sport mode, using the paddle shifters. But even in Eco mode, the little turbo pulls hard and never feels anemic.

Plus, it’s very easy to drive. The QX30 sits low to the ground, so it’s easy to step into and out of. Adding to the low stance, the suspension is firm, preventing too much SUV-roll in the turns. The steering is precise. There’s no need to get used to how it behaves: It’s user-friendly from the get-go.

Inside, considerable care has been given to the ergonomics. The driver and passenger seats are narrow but comfortable. There’s plenty of headroom and legroom, though less than a big passenger will want in the back seat.

But the interior is strangely small, and a little cramped overall, for a car that looks so big from the outside. Rear visibility is somewhat impeded by the sloping back contour of the car, but it’s helped considerably by a 360-degree view in the navigation screen, which can be switched on in forward or reverse gears.

Visibility from the back seats is limited by the front headrests and the small rear windows. My backseat guests said they felt claustrophobic.

Outside, is it just me? Does the design lack something? Like, beauty? Of course it’s a matter of personal taste, but I find the front a little too “Transformers” and the rear a little too blunt, as if the designers decided the car was too long and just chopped off the last two feet.

I like the swooshing lines on the hood, and along the lower part of the doors, but the plastic running board below it looks like it’s going to last about a month before snapping off.

I felt the same way about some of the interior components, where the abundant use of plastic made me wonder how it would look after a year or two of use.

Infiniti is offering the QX30 with just one engine, but in a variety of trim options. The base version comes as a forward-wheel-drive configuration, but an all-wheel-drive set-up is also available. (The vehicle is not available with a manual transmission, though.) There’s a Sport Model, a Luxury Model and a Premium Model. Extras include a moon roof, leather interior, wood paneling, special navigation systems and racy wheels. Pricing extends from about $30,000 for the entry-level models to nearly $45,000 for the loaded Premium version.

So, the pricing is right. The car is worthy. I’ll be interested to see how well Infiniti does in this crowded and competitive niche.

Lows: Big outside, little inside and ugly