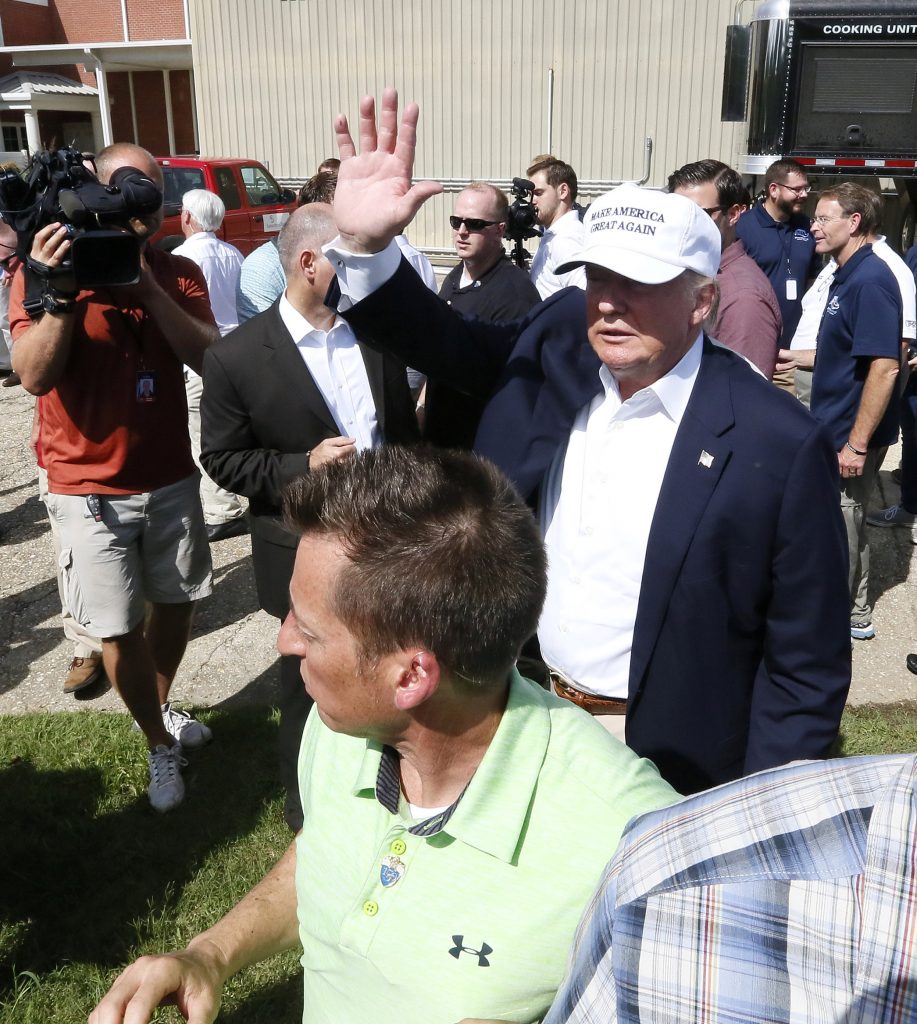 Donald Trump and his running mate Mike Pence are in Louisiana Friday to survey the flood damage that killed at least 13 people and displaced thousands more.

The visit comes amid an ongoing staff shakeup. Trump’s campaign chairman Paul Manafort resigned Friday following revelations about his work for a pro-Russian political party in Ukraine. On Thursday, Trump moved to invest nearly $5 million in battleground-state advertising to address daunting challenges in the states that will make or break his White House ambitions. While his rival Hillary Clinton has spent more than $75 million on advertising in 10 states since locking up her party’s nomination, Trump’s new investment marks his first of the general-election season.

In East Baton Rouge Parish on Friday, Trump’s motorcade drove through hard-hit communities, where ripped-up carpet and flooring, furniture and the entire contents of homes were piled on the curb. People who were still mucking out their homes, in some instances, came out to wave at the motorcade with gloved hands dirty from their house-gutting work. He and Pence then met a group of volunteers at a Baptist church who have been cooking meals for flood victims and helping the elderly gut their homes.

A torrent of about two feet of rain inundated the southern part of the state, devastating areas hit hard by Hurricane Katrina over a decade ago.

Trump’s decision to visit Louisiana came after the White House said President Barack Obama was unlikely to break from a New England vacation to survey the damage, despite calls for him to visit and meet with responders and victims.

In an editorial published Wednesday, The Advocate newspaper in Baton Rouge called on Obama to visit “the most anguished state in the union.” The newspaper noted that Obama interrupted his two-week vacation on Martha’s Vineyard earlier this week to attend a fundraiser for Democratic presidential nominee Hillary Clinton on the Massachusetts island.

But Trump’s decision to tour the flood-ravaged areas was met with harsh words from Edwards.

“We welcome him to LA, but not for a photo-op,” said his spokesman, Richard Carbo, in a statement. “Instead, we hope he’ll consider volunteering or making a sizable donation to the LA Flood Relief Fund to help the victims of this storm. ”

Edwards defended the administration’s response Thursday, saying he has spoken daily with the White House and would prefer that Obama hold off on visiting because such stops pull local police and first responders into providing security.

Trump’s new campaign manager, Kellyanne Conway, suggested that the visit was part of a larger effort, like his speech on Thursday, to pivot to a more presidential phase.

“It’s also presidential today to have him and Governor Pence going to Louisiana in a decidedly nonpolitical event,” she said on ABC on Friday,” adding that they would be “going to help people on the ground who are in need.”