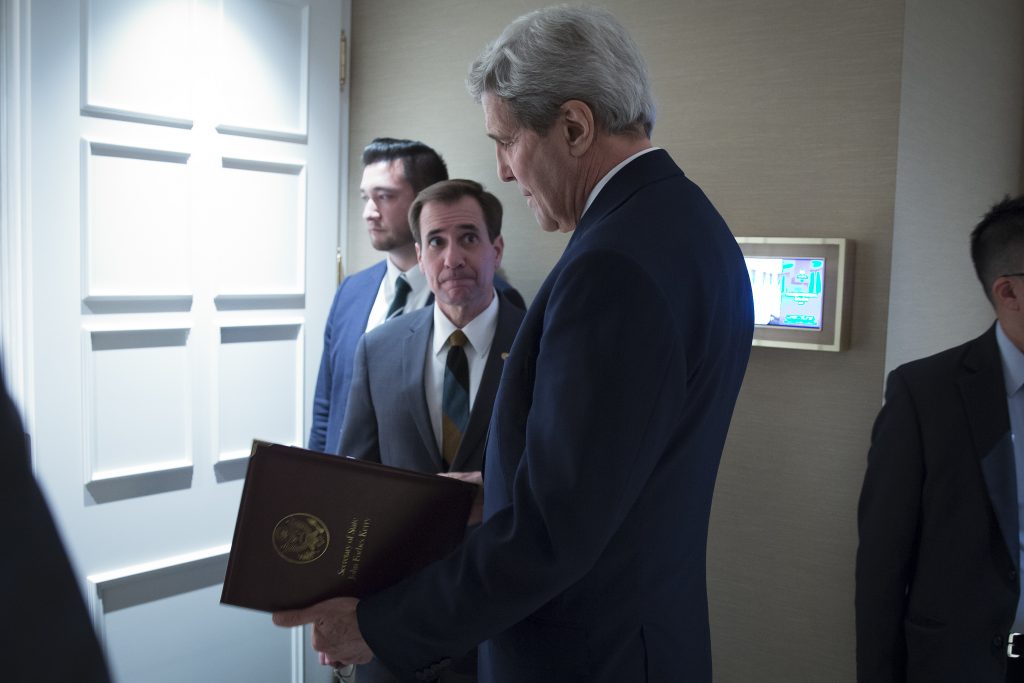 The Obama administration is facing a storm of Republican criticism after acknowledging that a $400 million cash payment to Iran seven months ago was contingent on the release of a group of American prisoners.

Thursday’s explanation was the first time the U.S. had so clearly linked the two events, which critics have painted as a hostage-ransom arrangement.

Repeating past administration statements, State Department spokesman John Kirby said the negotiations to return the Iranian money from a 1970s account to buy U.S. military equipment were conducted separately from talks to free four U.S. citizens in Iran. But unlike with past descriptions, he said the U.S. withheld the delivery of the cash as leverage until Iran permitted the Americans to leave the country.

“We had concerns that Iran may renege on the prisoner release,” Kirby said, citing delays and mutual mistrust between countries that severed diplomatic relations 36 years ago. As a result, he explained, the U.S. “of course sought to retain maximum leverage until after the American citizens were released. That was our top priority.”

Kirby said “it would have been foolish, imprudent, irresponsible” for the administration to have acted otherwise.

“If it quacks like a duck, it’s a duck. If a cash payment is contingent on a hostage release, it’s a ransom. The truth matters and the president owes the American people an explanation,” Sen. Ben Sasse, R-Neb., said.

“Decisions like these are putting our nation and our allies at risk,” added Sen. Richard Burr, R-N.C., the Senate Intelligence Committee chairman.

In a speech Thursday night in Charlotte, North Carolina, Trump accused President Barack Obama of lying. “He denied it was for the hostages, but it was. He said we don’t pay ransom, but he did. He lied about the hostages, openly and blatantly,” Trump said.

Kirby spoke a day after The Wall Street Journal reported new details of the crisscrossing planes on that day. U.S. officials wouldn’t let Iran bring the cash home from a Geneva airport until a Swiss Air Force plane carrying three of the freed Americans departed from Tehran, the paper reported. The fourth American left on a commercial flight.

Earlier this month, after the revelation that the U.S. delivered the money in pallets of cash, the administration flatly denied any connection between the payment and the prisoners.

“Reports of link between prisoner release & payment to Iran are completely false,” Kirby wrote at the time.

The money comes from an account used by the Iranian government to buy American military equipment in the days of the U.S.-backed shah. The equipment was never delivered after the shah’s government was overthrown in 1979 and revolutionaries took American hostages at the U.S. Embassy in Tehran. The two sides have wrangled over that account and numerous other financial claims ever since.

Obama has said his negotiators secured the U.S. a good deal on a busy diplomatic weekend that also included finalizing the seven-nation nuclear accord. But he and other officials have consistently denied any linkages.

“We actually had diplomatic negotiations and conversations with Iran for the first time in several decades,” Obama said Aug. 5, meaning “our ability to clear accounts on a number of different issues at the same time converged.”

“This wasn’t some nefarious deal,” he said.

The agreement was the return of the $400 million, plus an additional $1.3 billion in interest, terms that Obama described as favorable compared to what might have been expected from a tribunal set up in The Hague to rule on pending deals between the two countries. U.S. officials have said they expected an imminent ruling on the claim and settled with Tehran instead.

Some Iranian officials immediately linked the payment to the release of four Americans, including Washington Post reporter Jason Rezaian, who had been held in Iranian prisons.

Another of the prisoners, pastor Saeed Abedini, also had linked the two events. He said that as the prisoners waited for hours at an airport to leave Iran, a senior Iranian intelligence official informed them their departure depended on the plane with the cash. U.S. officials had pinned the delays on difficulties finding Rezaian’s wife and mother, and ensuring they could depart Iran with him.

“The administration clearly has a lot of explaining to do,” Rep. Jeb Hensarling, the House Financial Services Committee chairman, said. Congress, he added, must “fully investigate this outrageous action.”