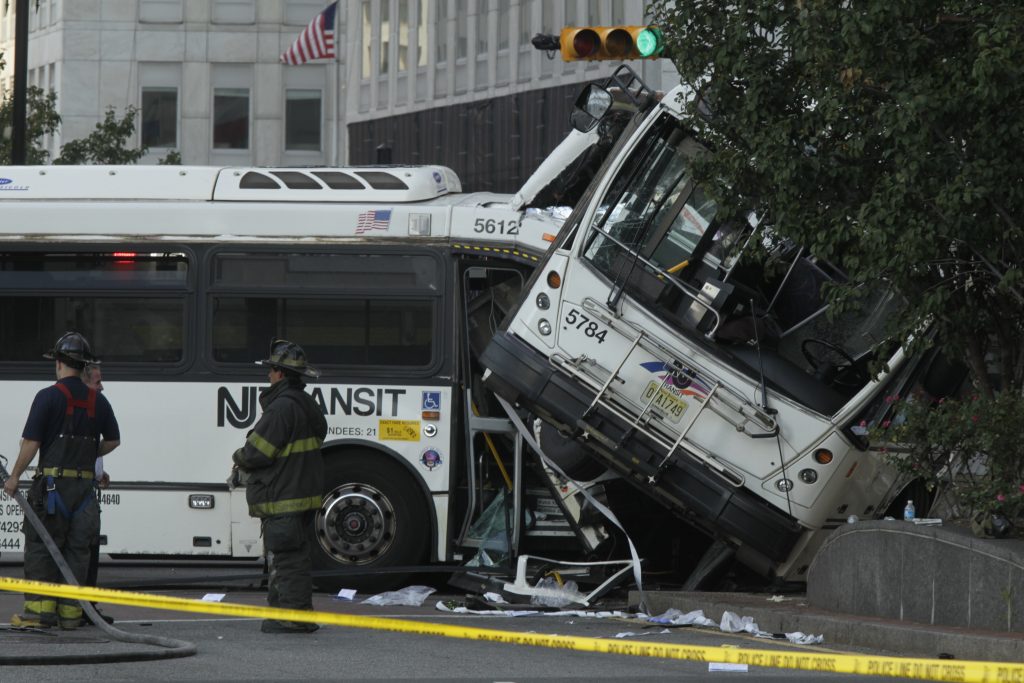 Two commuter buses slammed into each other in downtown Newark on Friday morning, killing a veteran driver and a passenger and injuring 17 others, including several critically, authorities said.

A New Jersey Transit bus just starting its route and carrying no passengers slammed into the side of another NJ Transit bus carrying about 20 passengers at around 6 a.m. at a downtown intersection.

Joseph Barthelus, the driver of the bus carrying no passengers, was killed. He had worked for NJ Transit for 27 years, the agency said.

A female passenger on the other bus died later Friday, said Katherine Carter, a spokeswoman for the Essex County prosecutor’s office.

“This is a tragic day for New Jersey Transit,” interim Executive Director Dennis Martin said Friday. “Our organization is in mourning today.”

Martin said the driver of the bus carrying passengers, 35-year-veteran James Roberts, was treated and released from the hospital. Martin said both drivers were in good standing with the agency.

Investigators were trying to determine if Barthelus ran a red light, Baraka said.

“We’re praying for all of those in the hospital,” Baraka said.

The intersection where the crash occurred was the first in the state, in 2009, to feature a surveillance camera designed to catch people running red lights. Then-Mayor Cory Booker conducted a demonstration in which he purposely rode through a red light.

The red light camera program ultimately expanded to about two dozen towns and cities in New Jersey before it was discontinued in 2014 amid controversy and lawsuits.

Officials in Newark and other towns claimed the red light cameras reduced accidents. Critics disputed that and said the cameras were mainly used to rake in cash for cities and towns.

The force of Friday’s crash left Barthelus’ bus embedded in the side of the other bus, which had come to rest on a traffic median tipped at a 30-degree angle. Firefighters pulled passengers through a side window and loaded them onto waiting stretchers and into ambulances.

The crash occurred as Barthelus’ bus began its route between Newark and Dunellen; the other bus was traveling between Irvington and Clifton, NJ Transit spokeswoman Nancy Snyder said.

The Essex County prosecutor is investigating the crash. The National Transportation Safety Board said it wasn’t involved in the investigation.