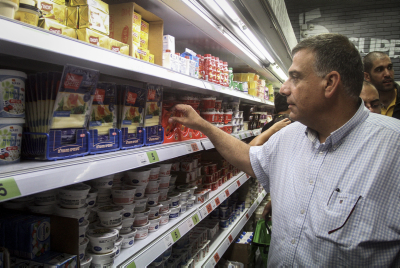 Cofix, the every-item-five-shekels chain, has quietly become a major phenomenon in Israel. Already by far the largest coffee shop chain (as opposed to a chain that sells coffee as well as other items, like gas) with 148 stores, the company expects to open at least another dozen for an even 160 by the end of 2026.

And to supply those stores, Cofix announced Wednesday that it was opening a new, 1,000-square-meter facility where it will manufacture its own products. Currently, the chain relies largely on outside suppliers – all its branches are kosher (many mehadrin) and all its branches are shomer Shabbos – but company chairman Chaim Aharon is seeking to expand the range of products the chain sells, and feels it will be easier to develop new products and respond to industry changes if it manufactures its own products.

While the notion sounds unworkable in Israel, where prices tend to be high, the entry of the Cofix chain to the cafe market has broken down that stereotype. Cofix, established three years ago, sells a wide variety of food and snack items – including selling more than 13,000 sandwiches a day – for no more than NIS 5 each, and in recent months has opened grocery stores where it offers many items such as bread, spreads, canned goods and much more for the same price. The Cofix “revolution” has inspired imitations such as the Pizza-Fix and Burger-Fix chains, where a whole pizza pie or fully loaded burger is available for a flat NIS 15.

Cofix itself has expanded beyond coffee and snacks, and operates a chain of grocery stores called SuperCofix, which has remained true to the chain’s five shekel legacy. SuperCofix especially relies on outside manufacturers, and mini-versions of many of the most popular products in Israel can be found in the stores. According to business daily Globes, the new factory will be able to produce half a billion products a year, including new items such as sushi, which recently was added to the menu.