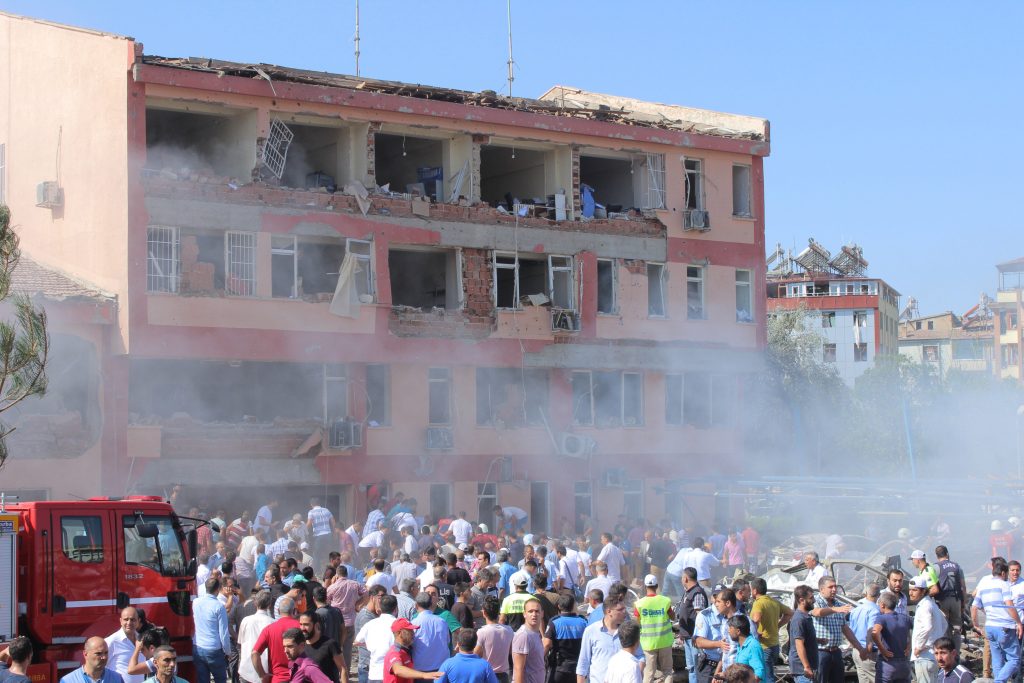 Two bomb attacks blamed on Kurdish terrorists killed seven members of the security forces and wounded 224 people in southeast Turkey on Thursday, officials and security sources said, in a renewed escalation of violence across the region.

A car bomb ripped through a police station in the city of Elazig at 9:20 a.m. as officers arrived for work. Three police officers were killed and 217 people were wounded, 85 of them police officers, Prime Minister Binali Yildirim said.

Offices in the police station were left in ruins and filled with smoke after the bomb exploded in front of the complex, destroying part of the facade, CNN Turk footage showed.

Less than four hours later, a roadside bomb believed to have been planted by Kurdistan Workers Party (PKK) militants tore through a military vehicle in the Hizan district of Bitlis Province, security sources said. They said the blast killed three soldiers and a member of the state-sponsored village guard militia and wounded another seven soldiers.

No one immediately claimed responsibility for the bombings, but Yildirim said there was no doubt they were carried out by the PKK, deemed a terrorist organization by Turkey, the United States and the European Union.

“The [PKK] terror group has lost its chain of command. Its elements inside [Turkey] are carrying out suicide attacks randomly wherever they get the opportunity,” Yildirim told reporters in Elazig. “We have raised the state of alarm to a higher level,” he said at the scene of the attack, where a crowd chanted, “Damn the PKK!”

The PKK has carried out dozens of attacks on police and military posts since 2015 in the largely Kurdish southeast in its fight for greater autonomy for Turkey’s 15 million Kurds. Elazig, a conservative province that votes in large numbers for the ruling AK Party, had been spared violence until now.

Video footage showed a plume of black smoke rising above the city after the blast, which uprooted trees and gouged a large crater outside the police complex, situated on a busy thoroughfare in the city of 420,000 people.

In Van province, further east, two police officers and one civilian were killed and 73 people were wounded late on Wednesday when a car bomb exploded near a police station, the local governor’s office said in a statement. No one claimed responsibility for the attack in Van, a largely Kurdish province on the Iranian border. The Van governor’s office said the PKK was responsible.

The southeast has been scorched by violence since a 2½-year ceasefire with the PKK collapsed in July last year. Thousands of terrorists and hundreds of soldiers and police officers have been killed, according to official figures. Rights groups say about 400 civilians have also been killed.

More than 40,000 people have been killed in violence since the PKK first took up arms in 1984.